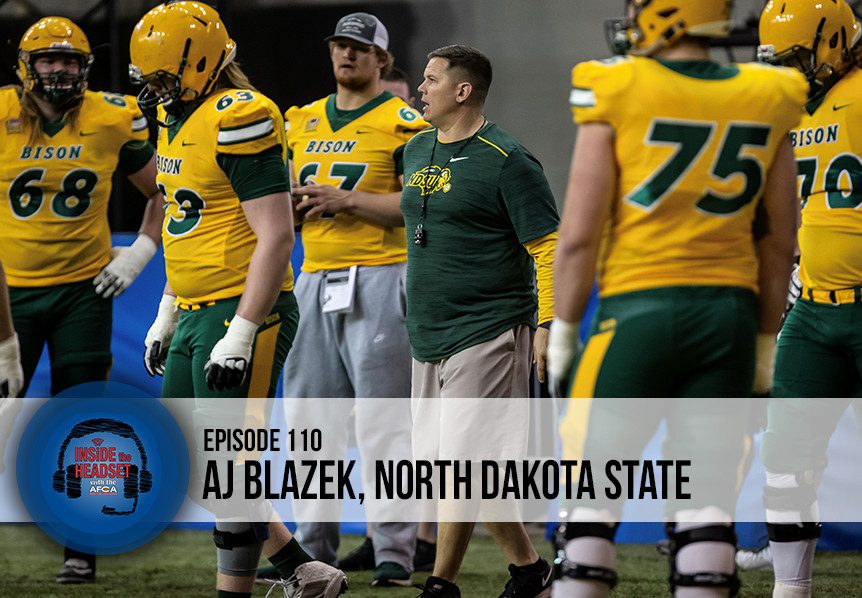 This week on Inside the Headset we speak with AJ Blazek, Offensive Line Coach for North Dakota State University. We discuss his entrance to the coaching profession, how he builds relationships with players and coaches, and what he looks for when recruiting offensive linemen.

Coach Blazek’s career began as a student assistant in 2001 at Iowa after finishing his playing career as a Hawkeye. He remained with the program for the 2002-2004 seasons working as a graduate assistant before accepting a full-time position at Fort Hays State as the offensive line coach in 2005. Blazek added the title of offensive coordinator in 2006 and led the offense from 2006-2008, and he later joined the staff at Winona State in 2009 to coach the offensive line. After going on to serve as the Co-OC in 2011 and 2012, Blazek spent the 2013-2015 seasons at Western Illinois where he coached the o-line and was the run game coordinator. In 2016, Blazek joined the Rutgers staff as the Offensive Line Coach and was named Assistant Head Coach in 2017. Blazek joined the NDSU football staff in January of 2019 as the Offensive Line Coach.