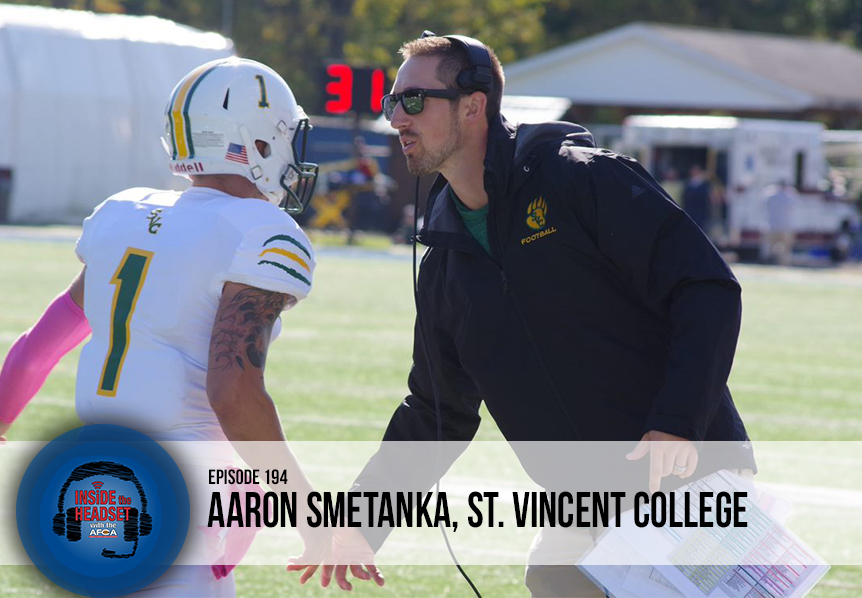 This week on Inside the Headset, we are featuring Saint Vincent College Head Coach, Aaron Smetanka. Coach Smetanka describes the meaning behind his teams “Rise Together” motto, shares the importance of developing players on and off the field, and gives his personal takeaways from the COVID-19 football season.

Aaron Smetanka is entering his third season as the Head Coach for the Saint Vincent Bearcats. Prior to St. Vincent, Smetanka was the Head Coach at Greensburg Central Catholic High School in 2017 and 2018. During those two seasons he oversaw all aspects of the Centurion football program, in addition to his head coaching role, he coordinated both the offense and special teams, while also serving as quarterback coach, strength and conditioning coach and equipment manager. After a brief stint at Chartiers Valley, Smetanka rejoined his alma mater as quarterback coach, a position he held for three seasons. Smetanka held a variety of responsibilities in this role. In addition to coaching the team’s quarterbacks, he was heavily involved in recruiting, scouting, and breakdown of game film, while also providing positive guidance and mentorship to the Bearcat players.

In addition to his coaching experience, Smetanka has been a coach and speaker for the Coaching Boys into Men program, an initiative aimed at promoting healthy relationships, building leadership skills, and decreasing violence among high school boys. Smetanka was chosen as a featured speaker at the 2018 Coaching Boys into Men Summit and was named the national MVP Coach of the Year, earning recognition from the United Way in its 2018 annual report. Coach Smetanka was also inducted into the AFCA 35 Under 35 program in 2021.