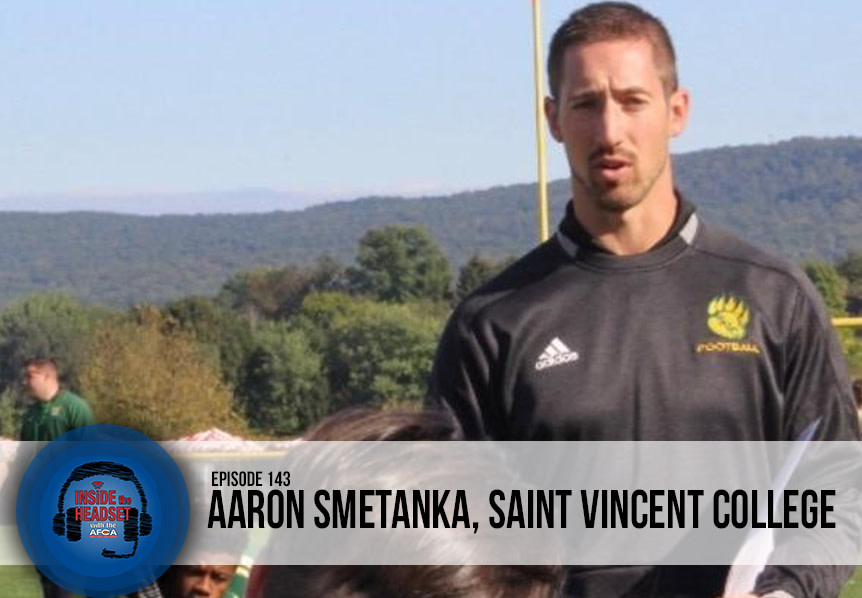 This week on Inside the Headset, we are featuring Saint Vincent College Head Coach, Aaron Smetanka. Coach Smetanka discusses becoming the head coach at his alma mater, professional growth through networking with his NFL connections, and the Coaching Boys Into Men program.

Aaron Smetanka was named the head football coach at Saint Vincent College in 2018. Smetanka is a Saint Vincent alum and former Bearcat quarterback. After graduating from SVC, Smetanka began his coaching career as the quarterback coach at Peters Township High School (PA) for the 2012 season. Following that one-year stint, he returned to his alma mater to join the Bearcat coaching staff as quarterback coach, a position he held for three seasons. Smetanka held a variety of responsibilities in this role, as in addition to coaching the team’s quarterbacks, he was heavily involved in recruiting, scouting, and the breakdown of game film, while also providing positive guidance and mentorship to the Bearcat players.

RELATED CONTENT: Inside The Headset: Enhancing the Experience of College Football [PODCAST]