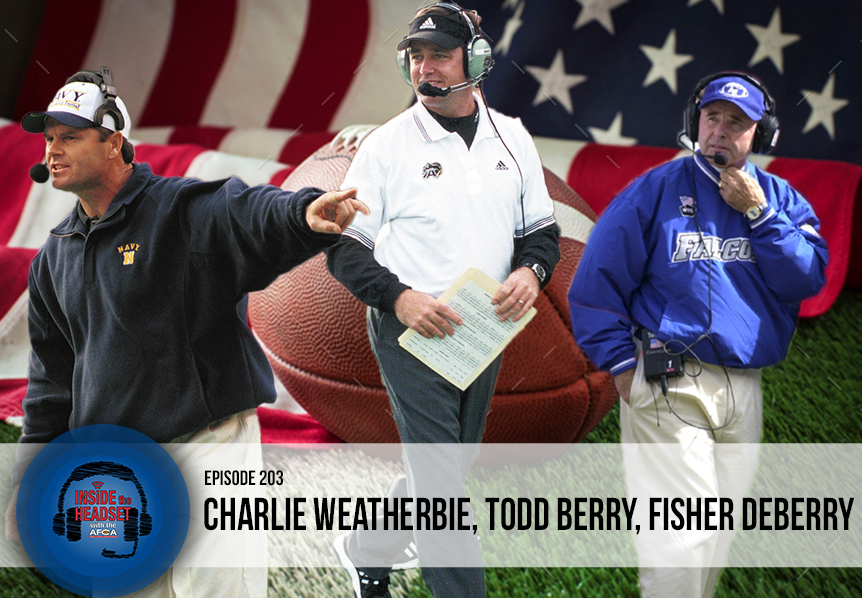 This week on this special edition of Inside the Headset, we are featuring the former Head Coaches of the military academies that coached during the tragedy of 9/11. These coaches include former Air Force Head Coach Fisher DeBerry, former Navy Head Coach Charlie Weatherbie, and former Army Head Coach Todd Berry. In this episode all three coaches tell their personal 9/11 stories while coaching at their military academy institution, discuss what recruiting was like post 9/11, and highlight the unique experiences of coaching at a military academy.

Fisher Deberry is the former Head Coach of the Air Force Falcons. Coach DeBerry coached the Falcons from 1984-2006 and achieved a great amount of on-field success during his 21 seasons at Air Force. Under Coach DeBerrys leadership, Air Force dominated the Commander-in-Chiefs series going on to win the trophy 14 times. In addition to that, Coach DeBerrys Air Force teams won three conference titles and also went to numerous postseason bowl games where they won a total of six during his tenure. Due to Coach DeBerry’s historic career where he won six coach of the year awards, he was inducted into the College Football Hall of Fame in 2011.