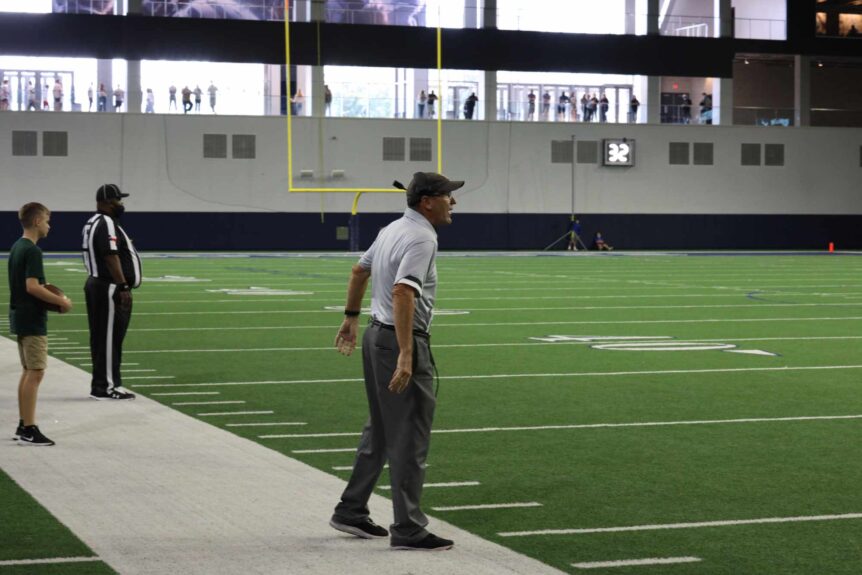 It is with great honor that I write this article for the American Football Coaches Association. My name is Coach Scott Smith and I have been coaching for 38 years in this great game of football. I have been influenced by many along the way. There are some that I chose to follow their influence and others I chose not to follow. Either way the influence of a coach, teacher, or administrator can be powerful. On any day, we have a choice to influence positively or negatively; at the same time, we have a choice to accept either positive or negative input in our lives. These choices impact who we become and how we live.

I have been influenced through the years by many fine coaches, teachers, and administrators. I have also been influenced by many players I have coached. In this article, I want to share with you how this great game of football has been the vehicle driven by special people, who have permanently influenced me. Their influence impacts how I coach and teach today.

As a student and player, I was influenced by Clovis Ryburn, Jim Kennedy, Kellis White, Bo Snowden, Frank Bevers, Randy Emery, Tommy Hudspeth, Grant Teaff, and Bill Lane. Each of these people had a special impact on my life. Through them, I was able to learn life-changing concepts such as: discipline, fairness, genuine love, competition, boldness, spirituality, mental toughness, and compassion.

As a coach in the profession, I have been influenced by Bill Hicks, Corky Nelson, Frank Bevers, Homer Johnson, Forrest Gregg, Grant Teaff, Danny Ford, Sara Hackerott, Dr. John Connolly, Kevin Steele, Dennis Parker, Dr. Gene Burton, Mark Elam, Dr. Robert Sloan, Vic Shealy, Bill McGee, and Cole Johnson. Each of these people has had a special influence on my life in countless ways. Through them I have witnessed the importance of teamwork, intensity, longevity, consistency, confidence, servanthood, leadership, vision, honesty, and humility. I would not be the coach I am today without these inspiring and influential individuals.

My wife Kelly was raised in a coaching family. She has, also, been a strong influence on me with her positive perspective and patient perseverance as we have moved from school to school. We were blessed with two boys and their families, who now share the joy of being in the coaching profession. I had the privilege and honor to coach both of my boys at the high school level. Now, they greatly influence me with the passion and compassion that they have for the young people they influence. I have learned it is one thing to say “I am going to coach young people like they are my own,” yet it is another thing to experience it and then continue to have the privilege to do it.

The game of football will teach many life lessons if you get into the profession with everything you have. The X’s and O’s evolve through the years, but never does the ability to influence positive or negative change. You will influence or be influenced one way or the other.

By the grace of the Lord Jesus Christ, I have been blessed mightily through this great game the influences that I had the choice to accept or reject. My prayer will continue to be that we, as coaches, take care of this great game that has been used to teach life lessons too so many through the years.

I would like to share information that has been helpful to me through the years. This is information that I use every year as we start back to work in January. It includes topics such as philosophy, player rules, discipline schedules, and questions to ask yourself as a coach.

My coaching philosophy is fairly straight forward. I do not have a lot of rules but certainly expect a solid work ethic and discipline from players and coaches alike. By consistently being on time and working hard, you are striving to perfect your craft and be the best version of yourself possible. As a coach, it is our responsibility to push players toward perfection, but in doing so, we must know what to teach and how to teach in a simple manner. It is important to note, however, that we should coach with our own personality. Don’t try to be someone you are not.

As time goes on and the players begin to trust you, strong bonds and relationships are able to take shape. It is important to get close to the kids’ lives because this is when you are able to make an impact. If the players know you care, then they will care. Similarly, it is important to build rapport with teachers. This communicates your interest in the academic component of school. Should discipline or grade issues arise, the teachers will then feel comfortable sharing that with the coaching staff. In a tag-team effort, the teachers and coaches will be able to correct the issue and reset the student-athlete’s path.

Another important aspect for coaches is to help each other out. If one coach sees something about another position, then it is okay for him to help out. We have the greatest profession and network to help each other be successful and move up the ranks. However, this should be done with professionalism and class. A significant prerequisite is experience. As a younger coach it is important to learn as much as possible and coach at lower levels such as freshman or junior varsity. This experience will only better you toward the next step in your journey.

NOTE: For any violation of the above rules, players will be subject to disciplinary action as directed by school policy and the head football coach.

Adherence to the aforesaid rules and regulations is vital to our success. Any player who repeatedly abuses the rules could be demoted, placed on probation, suspended or dismissed from the squad. These cases will be handled on an individual basis by the head coach. For any infraction of the rules, the individual will perform “reminders.”

A “reminder” is a 200-yard exercise during which a grass drill is performed every 5 yards with continual movement. One “reminder” must be completed in four minutes for it to count. If a player accumulates three or more reminders, he will run three “reminders” each day after practice until the total amount is completed. All “reminders” will begin after the upcoming practice, and they will be done everyday, in the dress of the day, and will be personally administered by the head coach at the immediate end of formal practice.

I appreciate you as a coach and your efforts to serve these young people through the game of football. These questions may seem repetitive, but I believe that although you have asked yourself these questions before, your answers may have changed a little as you have grown in your faith, teaching and coaching, and relationships. It is important to take some time to reflect on the following questions from time to time:

The questions and philosophies mentioned in this article are intended to help you grow as a coach, and I can only express my gratitude to each of you, who are fortunate enough to call yourselves coaches, as well as the AFCA for allowing me to contribute this article.

Prior to LCA, Coach Smith served as the Associate Head Coach and Offensive Coordinator at Houston Baptist University, where he helped establish the football program from scratch in 2013. Smith is a graduate of Highland Park High School and Baylor University, where he was a four-year letterman as quarterback and defensive back for the Bears. He has won numerous coach-of-the-year awards and has led four different high school teams to 18 playoff games in 17 years as a head coach.