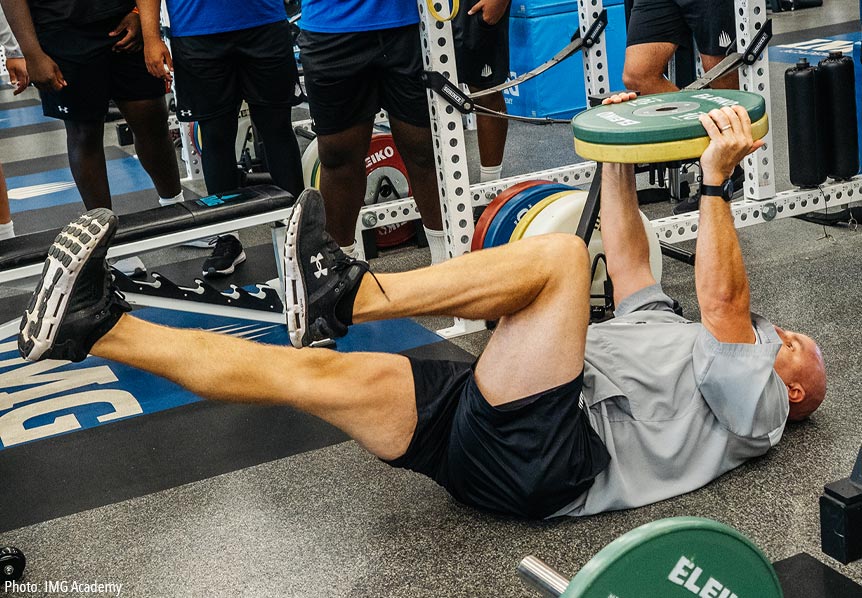 There was no trophy ceremony waiting in Bradenton, Fla. They weren’t presented with a crystal ball or a giant championship banner. In fact, several members of the IMG Academy national football team were already enrolled in college by the time they officially celebrated their national championship season.

Make no mistake, this wasn’t due to any controversy. The Ascenders were ranked No. 1 by USA Today, MaxPreps and the High School Football American rankings after a dominant season.

Their record sounds impressive, but it fails to even approach demonstrating just how dominant a year it was. In a season in which the mantra “Leave No Doubt” was echoing through the IMG locker room week after week, the team did exactly that.

Not a single opponent held them to under 41 points.On the other side of the ball, they never allowed more than 14 points in a game, with half their opponents failing to score in double digits.

The little things did indeed add up, and now IMG Academy sits on top of the High School football world.

Last year at IMG Academy, there were three different football programs. The national team mentioned above gets a lot of the fanfare and spotlight. They also fielded a varsity team which competed in the Florida High School Association, as well as a post-grad team.

This coming season, four football teams will represent IMG Academy, with a second varsity program being added into the mix. All told, over 160 players will comprise these teams’ rosters.

It takes a lot of coaching to give all those athletes the attention they deserve, and each team has their own dedicated staff. With all the moving parts within each individual team, there are undoubtedly times when a team or staff is focused on the task at hand and not necessarily on the program as a whole. One place where they do find unity — where all these players come together in a shared brotherhood — is inside the weight room.

“Not everybody’s being sold on playing for the national team,” Ascender strength and conditioning coach, Sebastian Gomez explains. “They’re being sold on getting the same type of training and coaching that they would, whether national or varsity, especially in the off-season. We get them all together.”

“We treat everybody as the same here,” Dillman adds. “We want everybody to get better no matter their athletic ability or talents.”

When you coach at a school like IMG Academy, you have the luxury of working with some of the most genetically gifted football players on the planet. When this is the case, comparing the amount of weight they are moving or how fast they run the 40 becomes an obviously silly way to measure weight-room success.

Inside the weight room, the strength staff demands the same from every player, regardless of which team they play for. They emphasize intent and effort, not numbers or talent.

“When you’re talking about brotherhood, it’s talking about holding the person next to you accountable. Don’t let them skip a rep,” Dillman says. “It’s a change in intent, and incorporating philosophy-based training helps change the intent of the players in the weight room, but also their intent on the field.”

Teaching athletes how to train with great intent makes IMG Academy even more attractive to young players destined for starting roles on FBS programs. Coaches have all heard

More Than Tech And Talent

IMG Academy clearly doesn’t reflect the makeup of the average high school football program. They are, in many regards, one of a kind. They have the sort of resources and technology at their disposal to rival the best programs at any level, and the percentage of their players that will wind up in the NFL is miles above the average.

Dillman, who has held positions at Appalachian State, Louisiana- Monroe, LSU, Florida, Alabama and South Carolina, compares what they do at IMG to what the program in Tuscaloosa has to offer. Comparisons don’t get any loftier than that.

Now in his second stint at IMG, Dillman refers to it as a special place.

“You look at some of these players that come in and you feel like you’re coaching a college team, but at the end of the day, they’re still high school kids that
are going to go to collegiate programs across the world,” Gomez adds. “So, it’s about setting them up for success and getting them to ask the right questions. We have most of the technology a lot of schools have, but you have to get them to understand the ‘why.’”

Athletic performance has evolved so much in recent history, with new techniques and technology emerging all the time. But all the technology and resources without a people-driven purpose is meaningless. At IMG, both Gomez and Dillman try to use the technology at their disposal to inform their ability to teach, and teaching is at the heart of what they do every day as coaches. The goal is for every Ascender to leave IMG Academy with an understanding of how their body works and how to train it properly. Even with their top-tier talent, the strength staff spends a lot of time focusing on the fundamentals of movement and refining basic lifting technique.

“When they go to college, they can teach their strength coach how to be a strength coach. How about that?” Dillman says with a chuckle. “We want the kids to understand what we’re doing. And we tell them to their face, ‘If you don’t understand what you’re doing, whose fault is it? And they’re like, ‘It’s your fault, coach.’ Yes, it’s my fault, because I’m not teaching them properly.

Keeping it simple isn’t a lost art in Bradenton. While it might be trendy in the athletic performance world to make training more complex, add more methodologies, use more measurables and gather more data, the staff at IMG will continue to focus on “doing simple better” and making decisions based on what’s best for their players.

“It’s awesome being here and being able to give back to the kids,” Dillman says. “I didn’t have to take this job. I wanted this job, because I’m in a space in my life now that I don’t really need a job. And so, the value of the messaging that I give is even better now because I’m not worried about my job, I’m just worried about what’s best for the kids.”

They might be NFL stars someday. They might be FBS stand-outs next year. For right now though, the players at IMG Academy are still high school students, and with the grounded approach of their coaches, they are in good hands.