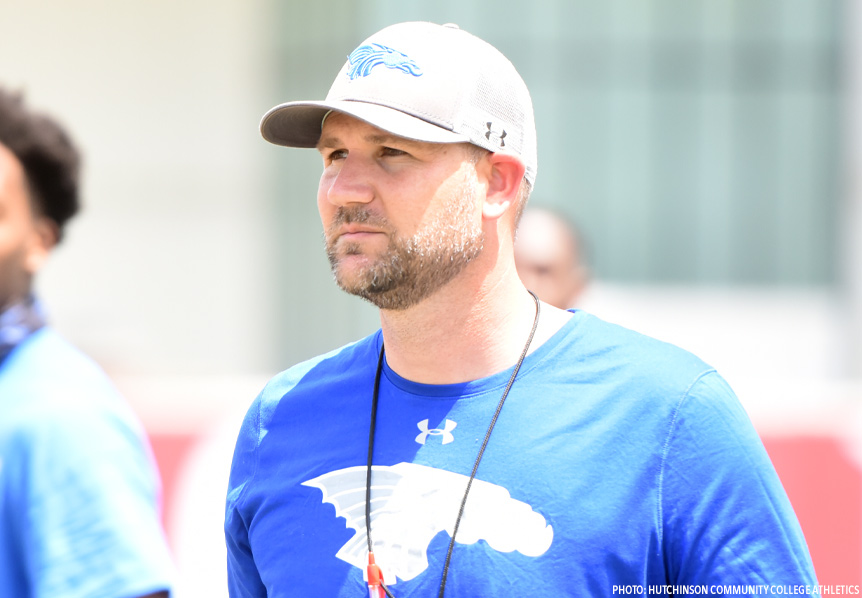 Drew Dallas had to wait 471 days between the day he was hired to his first head coaching job and his first official game. The Hutchinson (Kan.) Community College Blue Dragons had been waiting 89 years for its first football national championship heading into the 2020 season. The wait was worth it for everyone.

After losing the fall 2020 season to COVID-19, Dallas regrouped his squad for a spring 2021 slate of eight scheduled games, seven of which they played. They won them all, picking up blowout victories along the way of 48-8, 77-7 and 70-14. The NJCAA title game against Snow College was much closer (29-27), but in the end, the Blue Dragons persevered through a pandemic to finally grab that elusive national championship.

“In April, May, June and into July (of 2020), we didn’t have a whole lot of answers for what’s to come for our football team. That took a toll not only on the players but on the coaches as well,” Dallas says. “We dwindled down our focus to the day-to-day aspect of things. We didn’t know what the long term held for us. It carried over when we got back into school and football season. We just worried about being great today and finding a way to be great in the current moment.”

Dallas says once they had the opportunity to get together as a team, the first meeting established a goal of winning a national championship. But, to do so, you have to win the game that’s in front of you. It’s going 1-0 every week. Dallas admits it sounds cliché, but it works at Hutchinson.

For a Kansas kid like Dallas, winning a national title at Hutchinson in his first season as a head coach was more than he could have dreamed.

A graduate of Salina (Kan.) High School, Dallas went on to play quarterback at Fort Hays State and Kansas Wesleyan. He then jumped into the coaching ranks at Kansas Wesleyan before departing for the state of Texas, where he spent eight seasons at Division II Angelo State University coaching tight ends and receivers before a promotion to offensive coordinator that lasted from 2016-18.

“Initially, I went down to Texas to get my graduate degree and be a graduate assistant. I had a great opportunity down there. I always knew I wanted to coach college football and when you have the opportunity to do that in Texas, that’s something you jump on,” he explains. “At the end of the day, we had the opportunity to move our family with our three young kids closer to some family here (in Kansas).

“I wasn’t expecting to be in the role I’m in as quickly as it happened. Here at Hutch, I had the opportunity to work (as offensive coordinator in 2019) under Rion Rhodes, who I consider a Hall of Fame junior college football coach. Obviously, when this head job opened up, it was right place, right time, and something I wanted to jump on.”

While Dallas had to wait much longer to hit the field as a first-time head coach due to the pandemic, his offense was plenty prepared. As a former quarterback and offensive coordinator, this is the side of the ball where Dallas spends most of his time. And, despite the success he had at Angelo State, his offensive mindset shifted at Hutchinson.

“In Texas, we were tempo, tempo, tempo. We now have molded into multiple-formation sets and are able to run the football first. We keep things simple from a concept standpoint but create complex looks for a defense,” Dallas explains. “We have a system that we can adjust to personnel. A lot of that is being able to identify the playmakers and adjusting the offense according to that.”

At Hutchinson, Dallas plays with a one-back offense knowing he can “lean heavily on a big, physical offensive line.”

Clearly, it’s working for him and the offensive staff. The Blue Dragons ran for 273 yards per game during the spring season, which translated into 45.4 points per contest.

The defense wasn’t too shabby either, yielding just 13.4 points per game with five of eight opponents scoring 10 points or fewer.

“I give my defensive coaches quite a bit of freedom. We talk about the things that need to be stressed defensively, then let them go to work,” Dallas says. “We let their personalities play into it. We have a couple young guys and some veteran guys. It allows us to create a staff that works well together that can pull a lot of different ideas.”

After rolling through the regular season (closest margin of victory was 16 points), Hutchinson stumbled out of the gates in the national championship game against Snow College (Ephraim, Utah). The Blue Dragons fell behind 14-0 seven minutes into the contest.

Despite a more productive second quarter, Hutchinson faced a halftime deficit of 14-10.

Hutchinson was tested again in the third quarter when Snow Valley took a 21-10 lead. It was at this point Dallas made a personnel move not typically seen in championship games. He switched quarterbacks. C.J. Ogbonna started the year under center, then sustained an injury midway through the season. Dallas turned to freshman Dylan Laible, who skillfully guided the Blue Dragons through the remainder of the regular season without a blemish. Despite Ogbonna being healthy for the national championship game, Dallas says he explained to both quarterbacks he was going to ride the hot hand of Laible to start.

“That was communicated to both of those quarterbacks prior to the game about why the decision was being made, so we all were on the same page,” Dallas says. “The same thing happened at halftime. We sat there with the quarterbacks and coaches and explained to them that if we didn’t go down and score early on, we are going to make a switch at quarterback just to create some momentum.”

“The only way that switch works is if both guys are supportive of each other. They were tremendous in that aspect,” Dallas says. “A lot goes back to talking them through the situation and not catching them off-guard. They understood the why behind it.”

It wasn’t easy sailing to the title, however. Snow College trimmed the lead to 29-27, then failed on its 2-point try with 4:50 remaining in the game. After driving to the Snow College 38-yard line with time on his side and a fourth down looming, Dallas had another decision to make. He opted for a fake punt, which in the moment won the game with a presumed first down. But, Hutchinson was called for an illegal formation. It was a gutsy call regardless.

“It’s something we practiced all year long and something that’s in your back pocket in big situations if you need it,” Dallas explains. “We had 3 yards to win a national championship. It was the right place, right time. Unfortunately, we had an illegal formation called … but it was just one of those things, we prepped it, it was ready, we felt good about it and you need 3 yards to seal a national championship, so you go with it.”

Hutchinson punted and two plays later picked off a pass to clinch the program’s first title in its 89-year history. As the Blue Dragons prepare for the 2021 season, Dallas says buy-in from the new group of players becomes a little easier, which is important at the community-college level where you’re turning over about half the roster every season.

“Any time you are coming off a national championship, that gives you instant credibility with the new guys that this way works,” Dallas concludes.

This article was written by Michael Austin, contributing author for AFCA Magazine.