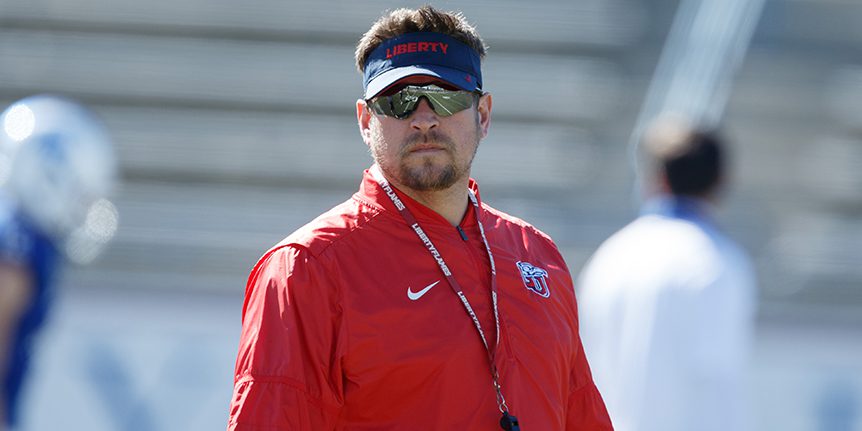 Everyone develops their coaching philosophy differently. Over the course of my career I have spent time as a tight end coach at multiple spots, but I have also served on the defensive side of the ball. That defensive background gave me the knowledge to teach tight ends what is going on in front of them and why. Learning defensive line play was a big plus because that is where the bulk of the box blocking will take place is against them.

RELATED ARTICLE: No Fullback? No Problem. The Y-Off Series

Teaching them the “why” is big for me. If they just go out to practice and do the same thing over and over again, without understanding the why, then they have missed the bigger picture and how they fit into the entire offense. There are also many different alignments the tight end must excel at such as: H-Back, Flex, on the line of scrimmage, etc. Overall the position is more complex than many realize, so I try to simplify it as best I can. Drilling fast, fundamental footwork to attack and win is No. 1. We use three types of base steps that we drill – Jab, Lead, and Reach. All three steps can be used either playside, backside, or inside based off the scheme. These are some of the everyday coaching points that I use.

The first step is a jab step which is straight ahead 6 to 8 inches. The second step is moving at the same distance as well. That way you always have your base. If you get them to think, “step and replace, step and replace,” they should always be in an athletic position. I believe in teaching four-step tempos. In the past, I used to teach one step at a time, but I believe you can get more taught in less time while teaching these as four-step progressions.  So, place the group in two lines facing a sideline or the middle of the field, with their right foot on the line. Make sure that everyone has a line as a reference. As a coach you can stand either out in front or behind everyone so you can see where everyone finishes. On your command, they should take the four jab steps and they should end up straight down the line. At the finish of the repetition, they can self-check and see if they ended up straight down the line. You can do this from three different stances as well; 2 point, 3 point, and 4 point (for goal-line/short yardage). I would recommend when you first begin training camp, spring football, to do each step two times in a row or until the whole group gets it correct. Then do the same with the left foot. (See Video 1.)

The next step is a lead step which is 10 to 12 inches on a 45-degree angle. This will be your most common footwork that you will use. Use the same down-the-line setup, have them start with their right foot on the line. When they step the first step should be outside the line, the second step should replace up and in. The third and fourth steps should move vertical, straight ahead. When you check your guys, they should all be straddling the line now. If they have moved too far off the line, or not enough, then this is an easy reference as a coach for you to correct the proper angle to the player. You can do this from three different stances as well; 2 point, 3 point, and 4 point (for goal-line/short yardage). (See Video 2.)

RELATED ARTICLE: Always Revert Back To Your Graining: Keys To Offensive Line Preparation

The last step is a reach step. Using the same down-the-line setup, have them all start with their right foot on the line. This time when they take that first step, their first step will lose a little ground and be about 6 inches off the line they started on. For second step, it is critical that it doesn’t cross the midline of the body so they aren’t in a power position to block. They still need to be in a thought of step and replace. This footwork is for your wide releases, outside reach blocks on a wide defender or wide alley block from the H-Back position. (See Video 3)

The next phase of blocking for the tight end is open space blocking. The drill is compress and shimmy. I like to use the rectangular stand up bags that are square in thickness for tight end blocking. They are big enough where you can hit them hard to get good, physical work where they shouldn’t be hurting each other. I also recommend using a blocking board for this drill as well so they will keep their base. Have the blocker start on the sideline on a big line (i.e. 10-yard line). Have to bag holder 5 yards in wider than the blocker at the bottom of the numbers (i.e. 15-yard line at the bottom of the numbers). On the start of the drill you want to have the blocker compress the space between him and the defender. Get them to attack the space to a 2- to 3-yard window from the defender. At that point they should shimmy to get their hip level down to get into a better blocking position. Many times this could be on a smaller, quicker athlete. If your tight end doesn’t get their hip level down, they will have a very low success rate of being able to get on the block. If they shimmy too early, they will also be lowering their success rate of being able to get contact on the defender. When you get into contact on the defender, hit, fit and drive him. You can do this from both the 3 point (releasing from the backfield) and 2 point (aligned out in space). I would recommend when you first begin training camp, spring football, to do each way at least two times or until the whole group gets it correct. Then do the same with the left foot. (See Video 4.)

One of the key fundamentals that many tight ends struggle with is avoidance in the passing game.  A lot of big, young tight ends haven’t been taught how to turn and avoid defenders. Many of my experiences with guys is that they have just used their size to run over people. You can’t get away with that as much at this level. A main drill that I like to use is a Gauntlet drill. The tight end will start on the sideline running across field down a main yard line (i.e. 10-yard line). Ideally you want three other people standing in front of him – one directly in front of him, another at the top of the numbers and the last person near the hash. As a coach, you have the football as the quarterback. The tight end can be in either a 2-point or 3-point stance. He will work his initial line of scrimmage release on the first defender, then running fast down the line he will work a rip technique on the second defender, and finally running down the line toward the third defender he should utilize a “chop” technique with the near arm and then immediately look for the ball. As a coach, you want to teach your tight ends to look for the ball as soon as they finish their rip or chop technique on a seam ball. Look right behind the defender’s ear. An example of this drill is on Video 5 (below). For equipment on this drill, you can utilize a hand shield at both the second and third positions. At the first position on the line of scrimmage, you can use a big square bag so they can overemphasize the use of their hands to not get held up by a defender.

Aaron Stamn will serve as Liberty’s offensive line coach during the 2017 season, the same role he worked in under Gill at Buffalo during the 2009 season. During his five years with the Flames, Stamn served as offensive coordinator from 2012-15 and tight ends and fullbacks coach from 2012-16. Additionally, Stamn works with Liberty’s kickers. If you have questions, please feel free to e-mail Coach Stamn at abstamn@liberty.edu.