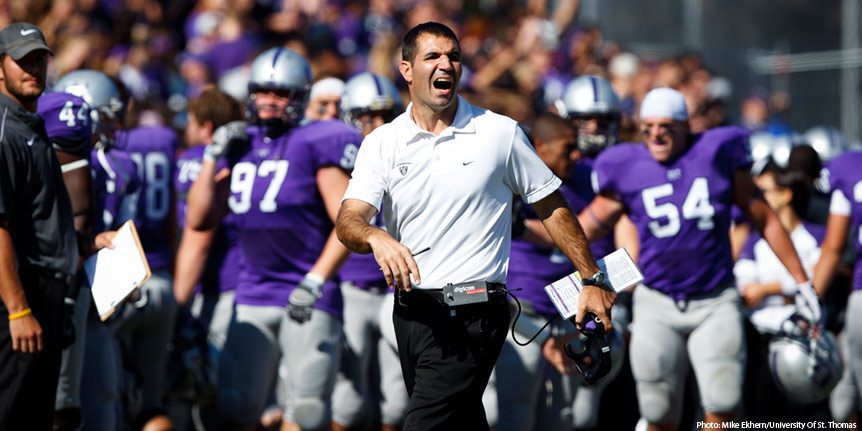 Spring is the time of year where the teaching aspect of coaching really comes into play. During this portion of the gridiron calendar, Glenn Caruso and his staff teach younger players (and re-teach some of the returning players) all the critical football fundamentals they’ll need to work on to become an effective player for the University of St. Thomas in St. Paul, Minn.

Meanwhile, all coaches involved in the strength and conditioning aspect of the program need to focus on the proper training methods and lifting techniques to maximize physical gains in strength, speed, flexibility and explosive athletic ability of the entire roster.

On top of those primary missions, the head coach is also charged with implementing all the new strategies that will best utilize the talent on the roster for the upcoming season.

Caruso, who is head football coach at the University of St. Thomas in St. Paul, Minn., understands that as a teacher, his ability to employ efficient teaching methods plays a key role in helping individuals grasp new concepts and execute them with a high-degree of confidence when the season kicks off.

In explaining his offensive philosophy, Caruso says how you teach and implement concepts is of the utmost importance. He outlines three philosophical pillars upon which his offense is built.

Caruso says an offense must be:

Caruso says his staff works tirelessly to achieve total balance as an offense. The wide scope of balance includes areas such as a 50/50 ratio with the run vs. pass, a 50/50 ratio with drop-back versus play-action, and within play action he wants there to be a 50/50 in-pocket vs. out‑of‑pocket ratio.

“Everything within our offense needs to have a balance point to it and we place great emphasis on it,” says Caruso. “As a result, we do a good job of staying balanced offensively – to the point where defenses we face are often on their heels against us – at times, at least.

“This occurs because defenses have a glimmer of doubt as to what we’re going to do next. And that glimmer of doubt is generated by our offensive balance, which is something we’ve worked tirelessly to achieve.”

While not mentioning the actual statistics he utilizes, the Tommies’ coach says his offense adheres to strict, measurable standards in both the run and passing games to achieve certain levels of efficiency.

Caruso says that the biggest area of impact with regard to efficiency is how they’ve built it into the progressions for teaching the offense.

“Efficiency for our teaching progressions, that’s the biggest thing, right there,” says Caruso. “If you watched us play, you’d probably say, ‘Wow! That offense is really complicated.’ But if you spent a year in our system, after those 12 months, you’d probably say, ‘That’s it? That’s all there is to this?’ And that’s all by design.”

In fact, Caruso says he spends far more time on the teaching progression of his offense, and the standards of efficiency, than he does on drawing up new plays.

“Efficiency is a cure-all,” says Caruso. “I mean, when it comes to Football Strategy 101, all coaches want to have the chalk last. We can all develop new plays, new tactical counters, counters-to-the-counters – you name it, and most good football coaches can strategize it.”

Caruso says it eventually becomes a trap and that football coaches can easily overload their players with too much information. As a result, it ultimately hampers a player’s ability to execute in-game, because there’s too much to process on a play-by-play basis.

“I’m not trying to downplay our play calls,” says Caruso. “But no matter the side of the ball, we always believed that the perfect play call – with players executing at only half-speed due to information overload – is never as good as an above-average play call that players can execute at top speed and with maximum confidence.

“Those are the most important variables to me as head coach. I’m a math guy and I believe in math terms such as variables, multiplying variables and grids. As such, there are only two variables that really matter on any given play: how good the play call was and how well your players executed the play.