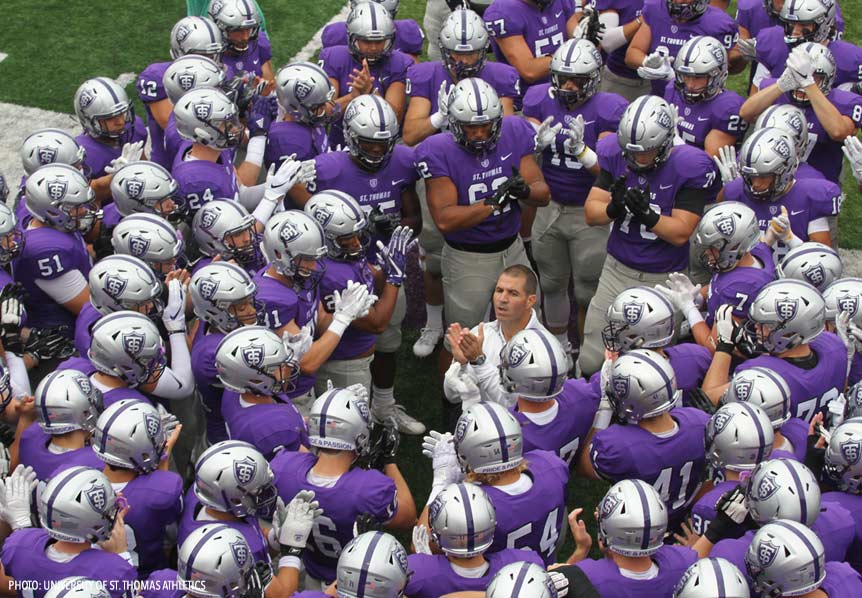 It’s just one of the important details Caruso has to navigate as he attempts something never done in college football — lead a program from Division III directly into Division I.

On July 1 of this year, the Tommies officially become part of the Football Championship Subdivision (FCS), joining the appropriately named Pioneer Football League to compete in the non-scholarship conference with teams spanning the entire country.

While the logistics of making such a move would seem daunting in any climate, add into the mix that it’s all happening during a viral pandemic that shuttered the Tommies’ fall football season, and it could seem overwhelming. Not for Caruso. The foundation for this change occurred well before the official announcement in May 2019, he says. It started the day he arrived on the St. Paul, Minn., campus more than 13 years ago.

“The way we approach the daily interactions is not going to change very much. The way we set it up when we got here 13 years ago was based off a FCS model,” Caruso explains. “Sure, some things have to change, but the bigger, pleasant surprise is how much they are going to stay the same.”

Caruso says while this is a once-in-a-lifetime opportunity, it’s made easier in that he isn’t taking a new job somewhere else to go from Division III to Division I. Regardless of playing level, the St. Thomas culture remains the same. 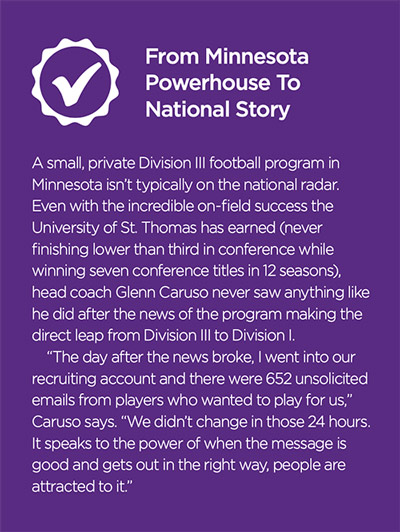 “People may look at the program and erroneously think it’s based on success,” he says. “But, that is the byproduct of the process that has been built and grown over a long period of time. For us, the true focus is how do we use the sport that we love to build the best husbands, fathers and leaders of men? How can we get that young man to be the best version of himself he can be? I know that sounds trite. I get it. But looking back over all these years, there is no way that sustained success can happen without strong foundations and principles, and those are part of ours. Any school can have a good football team, but it’s difficult to have a good football program.”

Caruso remains undeterred that the program’s principles have allowed for this jump to happen. He also realizes that going from Division III to Division I in such a short timeframe is unprecedented, and there are changes within the program that must be made to accommodate it.

He says staff size will increase. Support staff most certainly will increase as St. Thomas moves from playing in the Minnesota Intercollegiate Athletic Conference, which consists of private institutions residing in Minnesota, to now being a part of the Pioneer Football League, featuring a team on the west coast (University of San Diego), the east coast (Marist College in New York), Florida (Stetson College) and several states in between. The game day travel, but especially the recruiting base, exponentially multiplies with this move.

Caruso says the enormous footprint of the league obviously increases the recruiting scope. For the first incoming Division I class for this fall, St. Thomas has signees from 10 different states. Caruso wasn’t expecting to scale out recruiting beyond his usual “six-hour drive” from campus so quickly, but with COVID halting on-field football for St. Thomas this fall, he says his staff used the change in schedule to get a jump on this process.

“We thought the scaling out might happen by year two or three, but it actually occurred very early with this recruiting cycle,” Caruso says. “We did a good job making the most of the time we had.”

What also has to change for St. Thomas is the number of players on the roster. Gone are the days of carrying 140 athletes. The Tommies now have 110 players. Just like with everything else regarding the switch from DIII to DI, the roster has evolved over time to seamlessly transition rather than Caruso needing to cut 30 players on July 1. Recruiting classes have shrunk. Seniors have graduated without being replaced on the roster.

The change in roster size is one thing. Even the type of player St. Thomas recruits may change. But probably not as much as you might think. Caruso understands he is looking for different physical attributes in recruits with the move from DIII to DI, but a complete player at any level is much more than just talent.

“We are very aware that the players we are bringing in will be faster, bigger and stronger, but the core principles of who they are, they are still ridiculously competitive people. They are confident enough in their abilities, yet humble enough, to know that success occurs as part of the team success,” he says. “I’m not going to leverage the type of young man we get for any sort of on-field success. You can do both as long as you are thoughtful and diligent in the recruiting process.”

How COVID Affects The Timeline 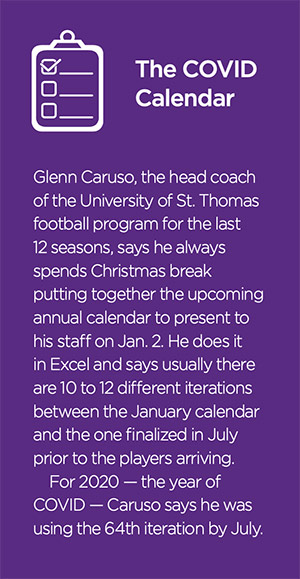 The Tommies announced in May 2019 the move to Division I. No one could have foreseen how 2020 would change the football landscape and players’ lives. On Aug. 5, 2020, the Division III Presidents Council called off all fall championships. As Caruso and his staff continued the preparation work for the Division I move happening July 1, 2021, they now faced no fall football in 2020 — no send-offs for seniors, no run at a national championship.

Amazingly, St. Thomas now faces the prospect of playing spring DIII football games (albeit just a handful of contests vs. a typical full schedule), then fall Division I FCS games in the same calendar year.

“It’s mind-blowing. But, it’s something no one has had the chance to do,” Caruso says. “We recognize that blessings and burdens are not mutually exclusive. The journey is what makes us who we are.”

Rather than simply flipping the fall training schedule to the spring, Caruso needed to dig deeper. His concern was losing the strength and speed developments typically gained in the spring for first-year players. He sees the spring as the largest return on investment in those players. Preparing for spring games as the sole coaching goal wasn’t an option.

So, Caruso and his staff identified three goals they must achieve this spring.

Caruso will also focus on players’ mental health. This has been a hard year. COVID potentially has impacted players’ physical health, the well-being of their families, the way they learn, their routines and how they socialize. While Caruso says mental health specialists, as well as meditation and mindfulness specialists, have been available to athletes for years, in 2020 it became an even bigger focus.

“As coaches, it was critical that we took a beat to see what the players were going through,” Caruso explains.

He cites the survey released this summer by Bill Carter’s Student- Athlete Insights of 43,000 college athletes that said, in part, the biggest stressor for college athletes was not being around teammates (mentioned by 77 percent of participants about what’s been difficult when dealing with COVID), outpacing concerns regarding finances (50 percent), online learning (63 percent) and getting out of a routine (68 percent).

“That told us how much the majority of our young men prioritize being together.”

Zoom, which Caruso admits he never heard of before St. Patrick’s Day, became vital to the program. He says not having the daily routine of the season showed players just how much they missed their teammates. They became more conversational and engaged in better open dialogue than in years past. They simply desired connection.

Forging Their Own Path

Connection also is something coaches use when entering a new job or career situation. Moving up from offensive line coach to offensive coordinator? Call your peers who
have done the same. Taking on a head coaching position at a new school? Talk to people on that campus and/ or coaches who have worked there previously. It’s second nature for coaches to reach out, connect and help each other.

Caruso admits he’s “talked to more people this year than in my previous 25,” but he’s not looking for real-world advice on how to make this transition from DIII to DI FCS. That’s because there isn’t any.

“We were looking for thoughts and ideas, not implementation. We housed our implementation internally. I wasn’t looking for a road map. I was looking for information regarding the destinations, so then we could put together our map and navigate it,” Caruso says.

He also returned to reading books on human psychology, personal growth and business principles. Caruso says it’s imperative for coaches to find authentic and genuine leadership outside of football. By limiting leadership just to football, coaches are narrowing their potential to learn.

“Finding creative and thoughtful ways to navigate unchartered territories is probably how I’ve spent the majority of my time in the last 18 months,” Caruso says. “There’s leadership all around us.”

It’s Caruso’s leadership that makes this incredible transition even remotely possible. It’s not lost on him what he, his staff, his administration and his players are about to accomplish.

“There’s a reason why no team in the history of college football has made this leap. It’s not because no one has thought about doing it,” Caruso reasons. “It’s because there are so many pieces that have to align for it to happen, and we happen to be blessed with that opportunity.”