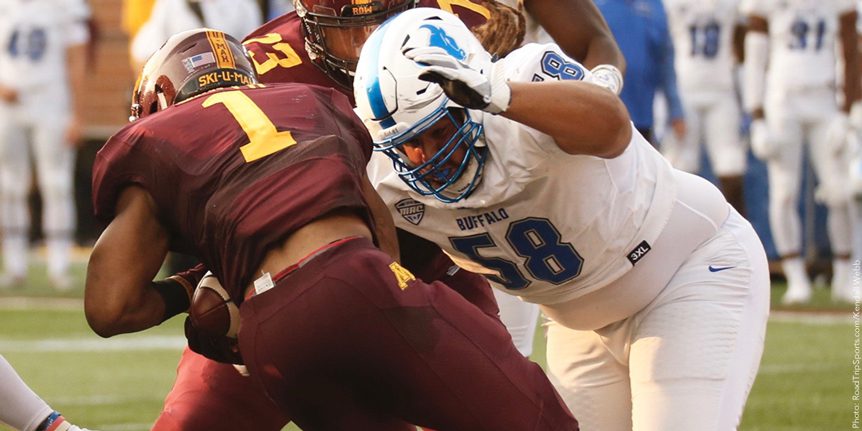 Leadership is forced on most linebackers by the nature of their role as signal callers and communicators at the line of scrimmage. Because of their position, linebackers must be more vocal and, as such, shape the defensive unit’s attitude during practice and games. Leaders are not always the most popular or talkative, but they are respected.

My teams have been blessed over the years with many convincing leaders. Never did we have a dominant defense without a respected leader. How did these leaders gain that respect? They developed a set of attributes in their personalities. Some were God-given gifts; most were products of time, energy and the desire to lead. Coaches must cultivate the following leadership qualities in linebackers every day.

American Cardinal James Gibbons said, “The higher men climb, the longer their working day. Any young man with a streak of idleness in him should make up his mind at the beginning that mediocrity will be his lot. Without immense, sustained effort, he will not climb high. And even though fortune or chance were to lift him high, he would not stay there. For to keep at the top is harder almost than to get there. There are no office hours for leaders.”

It’s obvious to most that success begins with hard work. The seniors, captains, quarterbacks and linebackers form the nucleus that sets the standard for the work ethic of the team. If this group does not demonstrate and demand hard work, the coach’s job becomes very frustrating. When young players see their peer commanders exerting consistent effort, they usually fall in line, and that behavior becomes a habit for their careers.

I agree with the legendary Vince Lombardi, when he said, “Contrary to the opinion of many people, leaders are not born. Leaders are made, and they are only made by effort and hard work.”

Every great leader I have prepared at linebacker has been a hard worker. None has been lazy. Teams won’t follow a player who doesn’t work hard. All of our effective leaders have also been enthusiastic. Because of their position, linebackers must exhibit a genuine zeal for performing and optimism for the future of the defensive unit.

Every player on the field sees the present circumstances, to some extent, through the eyes of the signal caller. His influence can make a poor call effective or take the starch out of a superior decision by the staff. The signal caller must believe in the game plan and sell it to the defense all week in practice and then on game day.

I often quote Dale Carnegie to our linebackers, first at fall camp and then at times of adversity during the season. Mr. Carnegie said, “Act enthusiastic and you’ll be enthusiastic.” I have found this statement to ring with truth. It contains a concept I had never heard of until I took his course on public speaking.

A body can actually control its mind. An athlete can be in the middle of double sessions, under a hot August sun, just trying to make it through another practice. If he follows his feelings, he will lack energy, which will curtail his learning and set a slower pace for those around him.

If he acts enthusiastically by moving quickly as if he had energy, his mind will follow with focus and vitality. One turned-on leader can be contagious for the entire defense.

Showboating and trash talk are selfish enthusiasm. They are brought on by pride and desire to bring attention to oneself. They have no place in great football programs.

During the modern era of football, individualism has taken a firm grasp on our society. We need to return to an age of sportsmanship. Sportsmanship has to do with manliness and respect for the opponent. A sportsman gets in the face of his teammate and jacks him up. A sportsman discourages his opponent by playing courageously until the final second.

The modern mentality of trash talk is faulty. It’s rare that I have seen a competitor at the college level intimidated by someone’s mouth. Almost always, the reverse is true; the competitor is inspired by the one who confronts him. Do not confuse showboating or trash talk with genuine enthusiasm displayed by a leader to spur his squad to victory.

No leader can succeed without a blueprint for success. A linebacker can work diligently and be eager, but he must show the troops how they can win. The leader must have a defined plan of action for the defensive unit to rally around.

The coaching staff designs the practice and game plans. Few people realize the hours involved in preparing a practice. Every minute is outlined, and each snap is either scripted or diagrammed to ensure the exact looks for the defense.

Once practice is organized, the leaders must be prepared. They need to understand the importance of this particular day and be able to convey that to the defense. The signal callers must also have a working command of the plan by down and distance, personnel, and so on. When a linebacker can promote a call through his knowledge of the game plan, it helps endorse the coaches and sells the unit on the game plan’s potential. When the leaders can persuade the unit that this plan will stalemate their opponents, it forms a firm union on the field and an air of confidence at the line of scrimmage.

On inconsistent defenses, the coaches alone sell the game plan and motivate the players during practice. With leaders in concert with the staff, the results are magnified. Each practice improves, and on game day, the linebacker becomes a player with a coach’s ability to explain calls and make adjustments.

A leader fosters team unity. He must constantly acknowledge the importance of every member of his unit. The media and fans celebrate those who make spectacular plays, yet they seldom understand that their favorites depend on their teammates and the scheme for the opportunity to make plays. A linebacker who leads must recognize the contributions of each of his teammates.

This attitude dilutes self-pride and promotes unity. A defense so tight that it operates as one heartbeat can become special.

Linebackers can’t be fainthearted or their teammates’ hearts will falter. The leader must bring unity by showing a confident heart and promoting the value of each team member.