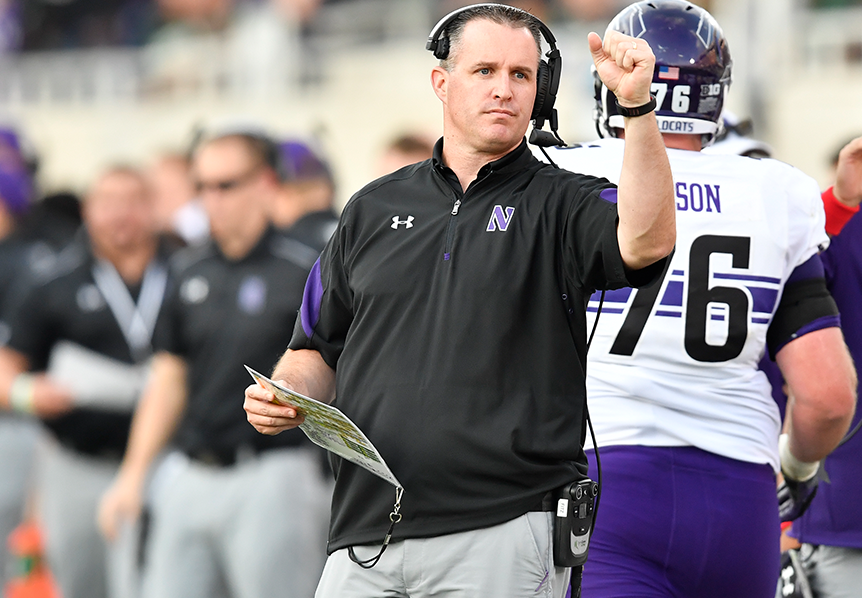 Despite experiencing numerous challenges that surfaced over the course of a global pandemic, Northwestern University Head Football Coach and current AFCA President, Pat Fitzgerald, sat down and recounted his coaching journey. Through hard work, meaningful relationships, and trusting leaders, Fitzgerald described how he has been able to transform the Wildcats into a consistently competitive program.

In his featured session, Fitzgerald offered an address to fellow domestic and international football coaches at the 2021 AFCA Virtual Convention.

This year’s convention looked significantly different from the typical year as the in-person meetings and gatherings were scrapped. Though the typical hustling and bustling of convention was absent, the connections and teachings continued in a virtual format, which featured a star-studded lineup of speakers, including Pat Fitzgerald.

Now a convention veteran, Fitzgerald shared his story about attending his first convention as a Graduate Assistant with the University of Maryland, and the impact it had on his career trajectory.

“I can remember that first year going to the convention as a GA and just how awestruck I was getting an opportunity to see the legends in our game and have opportunities to have conversations with those in the BIG 10 like Jim Tressel, and the great Lloyd Carr, and Joe Paterno and Coach [Steve] Spurrier,” said Fitzgerald.

Though Fitzgerald’s professional career began at the University of Maryland, he pointed out the significant impact that grade school football and those coaches had on his life.

Fitzgerald highlighted multiple coaches who left a lasting impact on his life, yet no one taught him about the power of influence quite like the late Northwestern coach, Randy Walker.

Taking Over in the Midst of Tragedy

As Fitzgerald took over the Wildcats’ program at the young age of 31, he did so under tragic circumstances. After Randy Walker’s sudden passing, Fitzgerald and his staff sought to honor Randy Walker’s family legacy. In doing so, he understood the importance of prioritizing people over drills. Fitzgerald desired to genuinely help his players work through the emotional difficulties of losing their coach before sharpening any scheme or skill on the field.

In alignment with his passionate desire to prioritize people, Fitzgerald gave an appreciative nod to all of the frontline healthcare workers, who have sacrificially aided the nation through such a challenging health crisis.

Fitzgerald also shared how his program was able to navigate the challenges of isolation throughout the pandemic by capitalizing on virtual meetings.

“We were really concerned with their mental health and we wanted to make sure we were diligent in staying in contact with our players,” said Fitzgerald. “And yes, talking football and continuing install, but more importantly building relationships.”

Every program across the country was left stranded without an alternative to enduring the challenging isolation period brought about by pandemic-based health concerns. Fitzgerald noted the importance of onboarding the athletes slowly throughout the atypical preseason as the athletes were able to return to campus. He also discerned the necessity of thinking outside the box to pump up team morale.

Fitzgerald discussed his personal experience of listening to and learning from the minority community throughout the past year. He offered his empathic heart toward those who have been treated prejudicially based on the color of skin rather than the character and skills possessed, and he presented the implementation of resources for student-athletes of color at Northwestern.

“I’m truly empathetic for some of the experiences a lot of our players have gone through and it’s forced me to look in the mirror…and truly look at how I run our program and how the experiences are, especially for our black student-athletes,” said Fitzgerald.

Grateful for the Gavel

In the opening moments of his speech, Fitzgerald offered his gratitude to AFCA Executive Director, Todd Berry, for guiding the organization diligently in the midst of unprecedented circumstances.

“I’d first and foremost like to thank Todd Berry, our great Executive Director, who under his leadership has taken the AFCA to new heights and has done an absolutely terrific job leading our entire membership through some of the most challenging times in our profession’s history.”

He also extended his gratitude and appreciation to current TCU head football coach, Gary Patterson, for serving as President of the Board of Trustees for the AFCA over the past year.

“You leave a huge footprint in the sand, Gary, and it is an honor to take over the gavel from you here in 2021.”

To watch Coach Fitzgerald’s Featured Session, including the Q&A, along with numerous other videos, please log in to your AFCA membership account and search through the AFCA Educational Library.