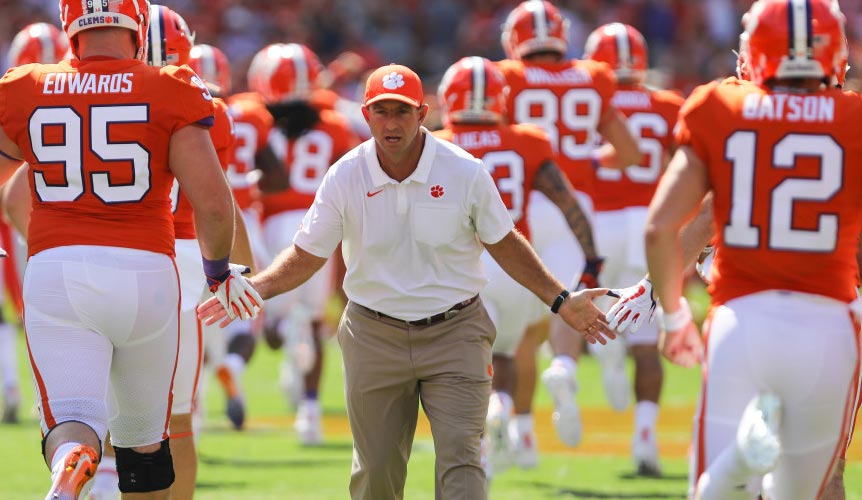 When your career is coaching football, and your peers are your literal adversaries, their opinion matters. Certainly, all coaches have looked across that eld when they’ve honestly “been had” by a better coach in that moment and thought … well, you know what you’ve thought.

But, no matter how positive or negative those thoughts, there’s a common thread that winds its way through the weave of a game, through the tapestry of a season, even through a coach’s psyche when he battles a truly worthy foe, win or lose. That thread is RESPECT.

Respect is an old word, and has been made famous by Aretha Franklin. In Latin, it goes back as early as 1620, but in common usage dates to Late Middle English. It means “to look back at” or “to regard.” Essentially, respect is something we do when we have time to process what we’ve just experienced and come to a substantive conclusion.

The Werner Ladder AFCA FBS Coach of the Year Award may not date to 1620, but it quite possibly embodies the nature of respect more than any other award in the game of football.

“It’s our oldest award,” says Vince Thompson, Director of Media Relations for AFCA. “We first started honoring a coach of the year back in 1935, and have done so every year since then. It’s one way our coaches can honor the best of the best in their profession. And it’s one of the only coach of the year awards that is voted on by the coaches themselves. So, it’s truly a peer award.”

Consequently, the coaches who’ve earned this title of distinction should come as no surprise.

They include — among others — Darrell Royal, Paul “Bear” Bryant, Bob Stoops and Tom Osborne. They include names synonymous with the word respect, and rightly so. Even more, these aren’t even coaches who’ve won national championships during the season they won the award. In reality, the Werner Ladder AFCA FBS Coach of the Year hasn’t been the FBS national champion since 2002.

“The coach of the year award means a lot to these guys because it’s voted on by their adversaries on the football eld,” says Thompson. “It’s voted on by the guys who they play against, or guys who know how they build a program. These are fellow coaches that know how they coach and what they do. And that’s why this award means so much more. It’s truly an award that personifies excellence over an entire season.”

Every coach who believes in the power of football to build better men knows the value of the game. Only a tiny minority of coaches can scale the heights to achieve true excellence, and sure, there’s always a little bit of luck involved in every game.

Still, to make the climb, great coaches know they need help from a great team of players and assistant coaches. It’s one of the primary reasons Werner Ladder signed on to sponsor the Werner Ladder AFCA FBS Coach of the Year Award in 2019. As a world leader in ladder manufacturing, Werner knows what it means to support a champion’s climb to the top. 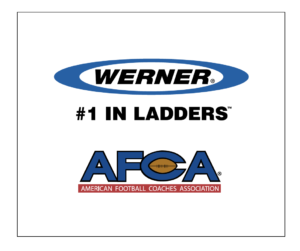 “There is no greater honor than being voted coach of the year by your peers,” says Todd Berry, Executive Director of the AFCA. “We are excited about Werner becoming the title sponsor of the Werner Ladder AFCA FBS National and Regional Coach of the Year awards. Werner is a global company that supports collegiate athletics in a variety of ways. We look forward to partnering with them to bring more recognition to the AFCA’s oldest award, and one of the most important honors we have.”

“Werner is thrilled to be partnering with AFCA and honoring these coaches who ‘step up’ every day on and off the field,” says Stacy Gardella, Vice President of Brand Marketing at Werner Co.

Two-time AFCA Coach of the Year Award winner Gary Patterson, head coach of TCU, understands what it takes to earn this title of distinction from his colleagues and adversaries on the field.

“The AFCA Coach of the Year Award I hold in highest regard because it is voted on by the American Football Coaches Association membership,” says Patterson. “There are so many coaches who are deserving of this award, so to stand on stage and receive this award was a humbling experience. I believe it comes with a sense of responsibility to represent this association on the highest level.”

Any coach who’s lost a tight game at the hands of a steadfast, glacial opponent knows the feeling of being outcoached. It’s this sincere understanding of what it takes to build a truly outstanding football program that makes the Werner Ladder AFCA FBS Coach Of The Year Award such a meaningful honor.

As a member of the AFCA, make sure to take part in this truly democratic process of voting for the best coach in the game. This award deserves your attention, because while winning matters, only you — as a coach — knows what it truly takes to build a football program that can not only win, but command respect from one’s peers.

Werner Ladder AFCA FBS Regional Coach of the Year voting opens in November and runs through the last weekend in December. Coaches typically have three weeks to vote. Once the five FBS regional winners are selected, those are the five finalists for national Werner Ladder AFCA FBS Coach of the Year, and that voting starts in the middle of December, and ends the Monday of the AFCA Convention. Make sure to take part in 2019 and early 2020, because your voice and your opinion matters.

Frankly, it’s a matter of respect.