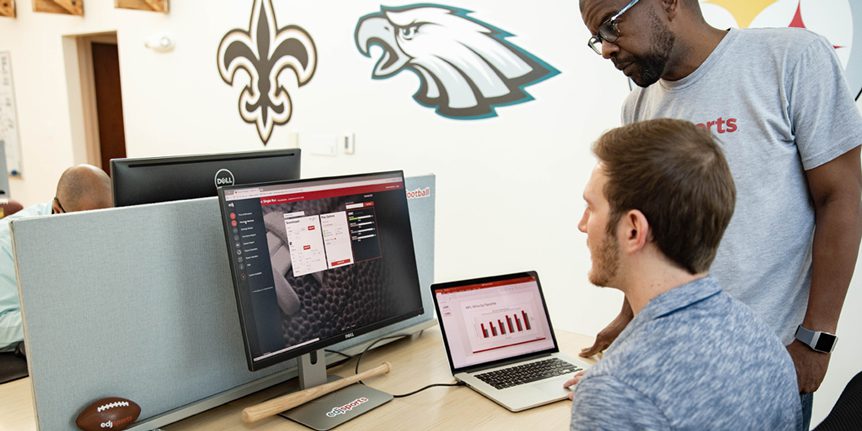 Case in point. The Philadelphia Eagles are faced with a decision in Week 6 of the 2017 regular season. With 4 minutes to go until halftime, on the Carolina Panthers’ 3-yard line, down 10-3, looking at a fourth-and-1, the Eagles wave off a high-percentage field goal and go for it, simply because the decision to go for it increased their Game Winning Chance (GWC) by 2.9 percent. Three tries later, the Eagles score a touchdown. The final score of the game? 28-23, Eagles over the Panthers.

The point is, analytics are about so much more than the acquisition of data. Frank Frigo, co-founder of EdjSports, says it’s important for analytics to impact what’s most important to a coach, which is winning a game. It’s important for data to transform into actionable information and help coaches optimize their own decision-making.

“The metric that really matters, the one that helps coaches, is GWC, or Game Winning Chance. Think of this as win probability,” says Frigo, who is also a world backgammon champion. “We can measure GWC pretty accurately for two custom teams through modeling and simulation. We’re going to understand risk and how multiple factors a affect risk and decision-making. How does ball position affect win probability? What about change in personnel or change in score or clock changes? Once you can measure these elements accurately, you can start to examine how different variables impact GWC and how sensitive GWC is to those changes.”

At the heart of EdjSports’ analytics platform is a “simulation engine.” It’s the engine that is constantly making calculations about all different aspects of a team and its performance. Its calculations make use of virtually anything that can be measured to derive GWC: penalties, turnovers, injuries, route accuracy, player spacing, the list is exhaustive. If it can be measured, it a affects GWC.

“But here’s the big distinction,” says Frigo. “Traditional modeling and analytics use look-up tables. How does this situation we’re examining look like something that happened in history? How often has it occurred? Our simulation engine is much more dynamic. We use 20 years of play-by-play data that informs how our simulation runs. But when we do an analysis, it’s actually very forward-looking. We’re saying, we’ve done a lot of work to describe who these two teams are. And now when we want to assess a particular decision or the impact of some situation, we’re actually simulating it going forward and we’re doing this virtually. We run that scenario literally millions of times to understand the statistical significance of our decision making.

“There’s an astronomical number of variables that you can describe in a football game that define a given situation. That’s the beauty of having a tool that can simulate and control what that looks like. We can model that situation and choose which plays from scrimmage we might try. How do those decisions affect GWC? It’s an approach that has been used with great results in financial markets, healthcare, education and sports.”

The Philadelphia Eagles certainly agree, and coming off their Super Bowl LII win against the New England Patriots, their reliance on analytics will no doubt grow.

Now, EdjSports is bringing an NCAA solution to the table that borrows heavily from its NFL product, but also seeks to account for the wildly varying disparities and levels of skill inherent in the college game.

For coaches who’d like more information about the EdjFootball platform, they can visit www.EdjFootball.com or call (502) 208-4088.