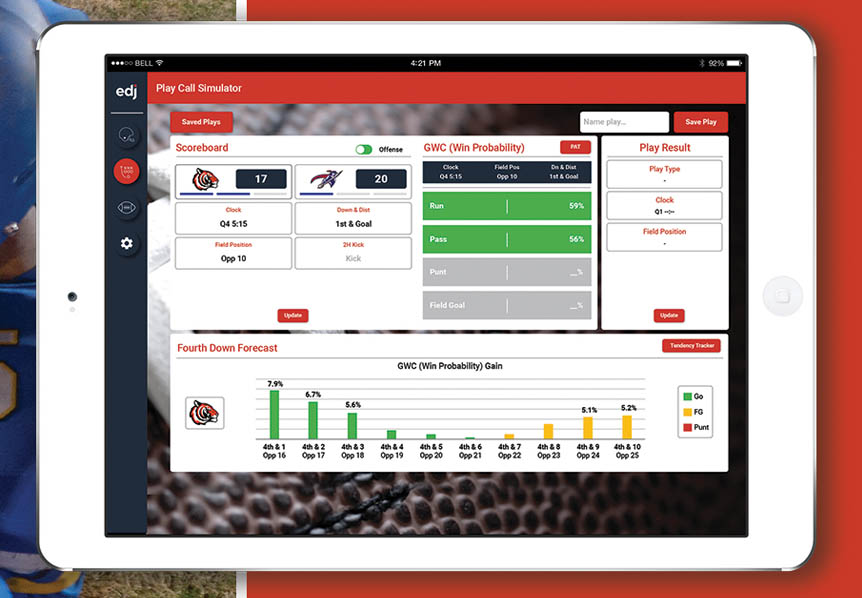 To say that times are changing, well, that wouldn’t do it justice. Certainly in today’s environment – awash with analytics – coaches are being forced to adapt to new situations they’d never before considered. The reality is, two years ago, no NFL coach in his right mind would go for it on 4th down in minus- territory unless it was a “must go” situation. You just didn’t see it. And if by chance you did, broadcasters would absolutely flay that coach on air. Whether it was the right call or the wrong call, it did not matter. Conventional thinking of the time was that you punt on 4th down.

My, how the times have changed. In week one of the 2020 NFL season, the reigning Super Bowl champion Kansas City Chiefs went for it on 4th down from the minus-34 yard line, and the broadcasters didn’t bat an eye. They went for it from their own 34, and they received praise. Think about that.

“That is unheard-of for teams two years ago,” says Anthony “AJ” Jones, Vice President of EdjSports’ Team Business. He has been working with analytics for decades, and while he finds this sea-change dramatic, he doesn’t find it surprising. “Coaches are getting the message. Fans are hearing the broadcasters. Analytics are mainstream enough where coaches and players understand it. Owners understand it. Maybe they haven’t bought into it wholesale, but they’re seeing teams that use it have success. So, everyone’s taking a deeper look.”

Part of this dramatic shift toward embracing analytics’ role in the game of football is a migration away from results-based decision making and toward process-driven decision making.

“Historically, it was hard for a coach to go for it on 4th down because the focus was on the result,” says Jones. “Everyone involved would look at that call and if it succeeded, it was a good call, but if it failed, it was a bad call. That’s a flawed decision-making process.”

That right there is the key point behind using analytics to drive decision-making in the game of football.

“In appropriate circumstances, even if it’s from your own 29 yard line, we can tell you that going for it on 4th down is the correct decision, fail or not,” says Jones. “By deciding to go for it, you’ve made the correct decision. Guys who do that well don’t second-guess themselves. They understand that choosing to go for it gives them the best chance to win the game, period. Coaches who understand this process know that good decisions don’t always result in wins. You still have to execute. But more often than not, making good decisions gives those coaches more opportunities to win games.

This is what coaches, players, administrators and fans are beginning to understand. If analytics are used to identify points in a game where good decisions can be made, then coaches who make those decisions at that time are making the right decisions, regardless of outcome.

YOU MAY ALSO LIKE: EdjSports Fosters Clarity, Confidence And Credibility

“Sure it can be unconventional, and you can disagree with what the analytics say, but in a given situation, based on a given customization, maybe the analytics say that 4th and 10 is a go,” says Jones. “The first time you hear those things, if you’re not getting your reps, that’s hard to hear. But if you sit back and think about what the analytics model is picking up, it’s paying attention to all the subtleties that we don’t think about. How many timeouts do you have? How many timeouts do they have? Is the other team likely to come back and score? There are so many different calculations that go into simulating the game state. People cannot mentally process it. It must be processed with computing power. That’s where we come in, and coaches who integrate it are reaping the rewards.”

EdjSports provides NFL, NCAA and high school teams with powerful advanced analytics for planning, play calling and post-game analysis. Their platforms assess a team’s Game- Winning Chance (GWC) at any moment of the game. Bring the power of analytics to your team, with understandable and customized, actionable insights. The result is more confidence in your critical decisions, with a true competitive edge that impacts the bottom line – winning. For more information about the analytics platforms from EdjSports, visit EdjVarsity.com.