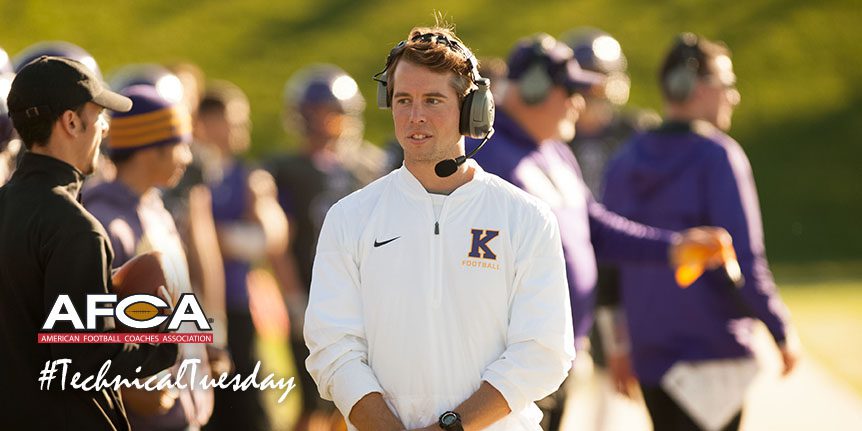 At Knox College, we run a 3-4 Defense with a slanting front. In the 3-4 system, it is imperative to have four coaches operating the different parts of the defense. During the last two years, we have utilized two coaches to work with both Inside and Outside Linebackers. Instead of separating the two units, we now have two pairs of eyes on each position. In the meeting room, the players are more equipped to understand the manner in which their job impacts their teammates. Obviously there are individual techniques specific to the outside linebackers and inside linebackers that require us to break up for a period or two, but on a daily basis, both units will go through a few core drills together. These drills are everyday linebacker drills.

As a young coach, one of the old adages that has stuck with me is the idea that anything one practices should translate directly to game play. If a drill does not show up on the field on Saturdays, then it is probably just taking time that could be better spent elsewhere. The daily drills that we do with our linebacker corps at Knox enhance movement skills, vision with its correlating reaction, and technique within the structure of a game scenario.

Our practice does not include a team-wide structured static or dynamic warm-up. Therefore, as position coaches we need to get our guys loose to start practice. The linebackers take advantage of this extra time by warming up using our core movement skills. Similar to many linebackers coaches, we use trash cans to represent offensive linemen in our read drills. Since these will be utilized later, we use the three can setup for our movement drill in the place of step-over bags. As an aside, we do not run across step-over bags during the season since linebackers never actually need to step over something when shuffling or crossover running.

Most of the movements that a linebacker does are in a confined area with sudden changes of direction. Therefore, we emphasize those quick movements in their work around the cans. The other major point of emphasis is pad level. Often, we will roll a mobility chute over top of the cans in an effort to force the hips to sink while doing the movements.

The player will start about 5 yards from the first can. The opening movement we do is a shuffle through the cans. We have each player shuffle down, the line flips and the players shuffle back. We then proceed to a crossover run, an M Drill (forward burst, backpedal, forward burst), and a backpedal weave. At times, we add in a hop at the end to work on their balance and explosion. The exact movements utilized are up to each coach’s discretion and what one feels their players need on that given day. (Diagram 1)

Since we are using this as a warm-up, we continuously remind the guys to focus on their technique and pad level rather than simply racing through the cans. Finally, a simple way that we consistently stress forcing takeaways is by having the players get used to finishing each drill by catching a football or scooping up a bouncing ball. The more comfortable defensive players get touching the football, the better.

The most important drill we do as linebackers is our Reads Drill. Some form of this drill is at the core of every linebacker group. As was previously mentioned, we incorporate cans as offensive linemen (specifically, a center and both tackles). We incorporate all four linebacker positions at the same time in our Reads Drill to allow the Ilinebackers to see the outside linebackers actions/reactions and vice versa. With all of our linebackers’s in the same area, we are able to set up the players who are not playing defense as offensive players to give the scout look.

Structurally, we have a coach at about 5 to 6 yards from center on each side of the formation. The coach standing on the defensive side will show the offense their movements and make a defensive call. The coach on the offensive side can then act as the quarterback for clean backfield action and to watch the actions of the defenders at the point of attack. On the coach’s cadence, the offense will take their steps in the given direction and the defense will react accordingly based off of the defensive call. The defense executes their technique through their gap and flows to the other side while the offensive players turn around and set for the coach to give them direction. The players rotate after two reps so that everyone works in on defense multiple times throughout the period. (Diagram 2)

Initially, the challenge with this drill is getting the new players into a rhythm of transitioning between offense and defense. The other aspect that sometimes needs to be touched on is defensive line action, depending on the complexity of that within a given scheme and if your players are capable of seeing the whole picture.

Drops and Ball out Break

Primarily, we are a zone dropping team in pass coverage. We work man techniques as well, but on a daily basis, our zone drops are the central focus. Through this drill, we are able to work on all of our linebackers’ pass drops and then incorporate a ball out break and intercept aspect into it.

All four linebackers align based off of the coach’s call of formation and defensive scheme. Any necessary checks are called and echoed. The coach who is playing quarterback calls cadence and the linebackers drop and move with eyes on him. When the coach throws the ball near one of the linebackers, all will break on a downhill angle toward the ball’s path (Ball Out Break). In this way, all of the participating linebackers will practice their drop, vision and ball out break, with one of them also finishing with an interception. Due to our landmarked drops, we will move the ball around between the hashes to ensure all of the guys get each drop that would come up throughout the course of a game. (Diagram 3) Depending upon the opponent, or if there are any special route concepts that week, we can add in linebackers who are not currently playing to act as receivers to aid the visualization process. The final piece we can add to this before we face a scrambling quarterback is to have the coach break contain. This will allow players to work on their rotation in coverage and any pull up, replace rules. (Diagram 4)

Much like most of the country, we have recently transitioned to the rugby-style tackling that the Seahawks have coined “Hawk Tackling”. After teaching the basics of this in fall camp, we have our entire defense go through a three-part tackling circuit throughout the season. For all of these drills, we use the tackling donuts and perform the Hawk Tackle on the player’s leverage side. Each day, our players will get about two reps of each tackling style to continue to inundate them with specific movements.

For this drill, we have a coach on the numbers at 5 yards in front of the defender and prepared to roll the donut. The next man in line will act as a blocker, forcing the defender to shed the block based upon position technique and perform an angle tackle.

The next drill has both the coach and the defender standing on the hash, 5 yards apart. The coach sends the donut hard across the field towards the other hash. The defender will maintain back shoulder leverage by either shuffling or crossover running with his shoulders square. He will gain ground on the donut before performing the Hawk Tackle.

#3 – Sprint and Change of Direction Tackle

Our third drill is designed to have the players make a tackle in open space when skill players are at full speed (our defensive linemen do not do this one). To operate this drill, we have a coach stand 20 yards away from the defender with both on the numbers. The player sprints directly at the coach. Once the tackler is approximately 7 to 10 yards away (dependent upon player’s speed), the coach sends the donut in an unspecified direction. This action forces the player to transition from full speed to a breakdown in order to make a tackle in space. (Diagram 5) I do not believe any of these drills are revolutionary; in fact they are quite simple. However, I do feel that we have cut out a lot of time-fillers and constantly rep our guys in actions that they can feel themselves utilizing on game day.

I would like to thank Head Coach Damon Tomeo and Athletic Director Chad Eisele, along with the rest of the football coaching staff and players for giving me the opportunity to coach at Knox College. If you have any questions, feel free to contact me at any time at bmyers@uwf.edu.

Britt Myers is now in his second season on the coaching staff at the University of West Florida as a graduate assistant. Prior to that, he spent two seasons coaching linebackers at Knox College in Galesburg, Ill. He wrote this article while at Knox. Before his time at Knox, Myers was the defensive coordinator and defensive backs coach at Lane Tech. Under Myers, the team’s rushing defense and total defense improved, and two defensive backs earned all-conference honors in his one season as the coordinator. Myers served as the wide receivers coach and special teams coordinator in his first year.