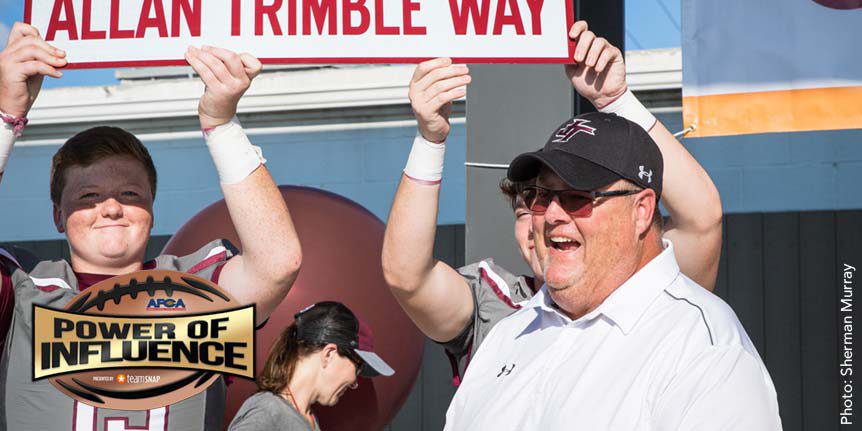 Allan Trimble is keeping everything in perspective.

He struggles to do so at times, he’ll be the first to admit. But somehow, Trimble manages to keep his priorities straight.

Trimble has been the head coach at Jenks High School in Jenks, Okla., for more than 20 years. Entering this season, the Trojans own a record of 224-35 under his leadership, and have won an unprecedented 13 state championships.

All his success hasn’t gone unrecognized. Trimble is no stranger to accolades over the years, and in 2017, he added the AFCA Power Of Influence Award – an award that has grown in notoriety and is now officially presented by TeamSnap during the general session of the AFCA Convention.

“They named the stadium after me, which is unheard-of here,” Trimble says. “But when it comes to the Power of Influence Award, you’re being honored by your peers, by guys who really understand what the profession is about.

“It’s super humbling. There’s all kinds of people in my career who have helped along the way, to produce this honor for me. We all know that it’s all about your support network and the good people that have helped you along the way.”

Trimble receives this award following a “whirlwind year.” In the summer of 2016, he was diagnosed with Amyotrophic Lateral Sclerosis‎ (ALS), also known as Lou Gehrig’s Disease.

The disease attacks the nervous system, resulting in the loss of motor skills over time. The pace of the debilitation it causes varies from person to person, but the end result is always the same – this terminal disease has no known cure.

“I’m looking ahead at where this thing goes, and I’m going to be completely dependent. When you look at the statistics of ALS, it wins the physical game 100 percent of the time. It’s undefeated.”

With his personal health failing, Trimble continues to coach and mentor young men at Jenks. Looking back at a lifetime of doing so with new-found perspective, Trimble believes in what he’s doing now more than ever.

The ability to look at life with the end in sight is scary and humbling, but it also provides invaluable insight Trimble hopes to share with everyone he meets.

Trimble decided to pursue a coaching career, in large part, because of the positive influence of coaches in his own life. As a high school athlete in Cleveland, Okla., a young coach by the name of Ron Wolfe showed Trimble what it meant to work hard, sacrifice and be part of a team.

The lessons Trimble learned as a player remain an integral part of the way he runs the Trojan program today. Everyone on his staff is guided by the same pillars of faith, family, academics and football.

“I saw what difference a really good coach could make in the lives of their people,” Trimble says. “I’ve always tried to hire men who are motivated to make kids better kids, and work hard, and let them know they have the freedom to use their creativity and their influence.”

Trimble hopes to instill character within his players, and believes in the value of football as a tool to set them up for success.

“Football is the greatest classroom there is for teaching young men about life,” says Trimble.

Trimble and his staff have to fight sometimes, not just for wins or scholarships, but for the futures of the young men in their program. If there’s one truth Trimble has learned after decades of fighting that battle, it’s the value of continuing to fight.

“I think now more than ever, the fight is worth it,” says Trimble.

Trimble’s resolve has certainly been tested with the news of his illness. After much prayer and deliberation, he even decided to retire in June 2016.

“My wife and I decided, ‘Who am I to walk away from this platform?’” Trimble says. “It’s been tough, but it’s worth it.”

It’s difficult enough to manage all of the duties as a head coach without having to worry about whether or not your own body is going to cooperate with you. Still, Trimble feels the benefits far outweigh his personal sacrifice.

“What these kids are gathering from this journey is something that’s going to send a ripple effect through the rest of their lives. Whether it’s a job situation where they don’t get along with their manager, or a tough go in their marriage, they’re going to hopefully have some experience of managing difficult situations and taking the high road.”

Count It All Joy

It may be hard to comprehend how a man who is facing such terrible adversity can keep such a positive attitude, but Trimble “doesn’t have a lot of secrets,” and his faith certainly isn’t among them.

“It all boils down to my faith,” Trimble says. “I really believe the verse in James that says count it all joy when you come into hardships.”

Recently, Trimble has struggled to “count it all joy,” but not because of his illness. The Trojans started the year with four straight losses this year – adversity that any football coach can relate to.

Trimble understands the meaning of that verse even more now. As his faith is tried, his patience grows, and he prepares himself to let go of the things he can no longer control.

“0-4 doesn’t help me sleep at night,” Trimble jokes. “In the grand scheme of things, it’s not as hard as waking up and having to have somebody help you put your shoes on.

“It’s my nature to want to win. As a coach, you want to figure out what makes your team tick. You want to make sure you’ve turned over every rock and strategy to help your kids be successful. I’m going to have to let that go.”

Adversity challenges everyone throughout the course of their life, but instead of wishing for a life free of adversity, or focusing on the adversity itself, Trimble encourages others to look for the lesson it has to offer.

“Life is what happens as you’re living on the front lines,” Trimble says. “I think God puts you in situations, and He walks you out the other side ready to equip other people to do the same thing.”

As far as Trimble is concerned, it is “all joy” that he has been placed on this path. It may not be the way he envisioned his life going, but he has a much harder time counting all of the blessings than finding reason to complain.

Throughout the course of his life, Trimble has been blessed with two beautiful daughters, a loving wife and a community where he is held in the highest regard. The rest of what he holds dear: the competition, the leading and mentoring of young men, the opportunity to be a shelter for others – those are the aspects of his life he’s clinging to for as long as he can.

Life forces everyone to let go at some point, but it’s a difficult transition for a man who has dedicated his life to helping others. Being strong and independent has allowed Trimble to help so many people over the years, but now Trimble will have to accept help from those around him for a change.

“Part of my maturation process that the Lord is putting me through is learning how to receive mercy, and how to be gracious,” Trimble says. “And I am gracious, but for some reason my pride gets in the way. And that’s probably the hardest process of all right now.”

Learning To Number His Days

As Trimble prepares to close the book on his coaching career, he reflects on all of the moments he treasures the most. There were so many big games and hard-fought victories, it would be hard for anyone to put it all into perspective.

While the competitive fire still burns, Trimble wants to focus on what’s truly important with whatever time he has left.

“You want to work hard. You want to win. You want to chase that competitive dream of being the best,” Trimble says. “But ultimately, you can easily be blinded by that and lose track of your faith and your family – those key elements that ultimately are the foundation to your success as a team.”

Coaches live extremely busy lives, and it can be a real struggle to keep priorities where they should be. Trimble has found a new point of view on his priorities since his diagnosis, and has rededicated himself to making each day count.

“I’ve always read the Bible verse in Proverbs, ‘Teach me to number my days,’” Trimble says. “Then when you get the diagnosis that says, ‘Hey, your days are numbered, brother.’ Boy! You get to look into your rear-view mirror with a little bit of different perspective. It’s definitely given me a perspective to help these young coaches.

“Do not miss your son’s football game. Do not miss your daughter’s soccer game. Do not work late on Sunday night, and if you need to go to church, you go. Which ultimately is the way we should do it anyway. We all know it, but it’s keeping that eternal perspective. So it’s been good to know your days are numbered.”

Most coaches don’t intentionally put football in front of faith or family, and yet it happens far too often. Maybe that’s why Trimble can honestly claim that it’s good to have such a strong reminder of what’s of real value in his life.

Trimble recognizes how difficult it is to face his mortality, but he’s hopeful others will benefit from the vision it gives him. He’s tried to view his whole life with an eternal perspective, and now that he has taken a step closer to the edge, the picture has never been more clear.

“It’s a tough one to know that your health is failing, but it’s also an unbelievable platform,” Trimble says. “If you live in that perspective as best you can, then life is full. Life is full. Life is more than a special teams deadline on Sunday night at ten o’clock.”

“I want to list things on my calendar that will make an eternal difference. Some of the things that show up on my list that are urgent, may not necessarily be so important on the eternal journey.”

In the end, a coach’s legacy isn’t wins and losses. A coach will be remembered by those whose lives have been touched, long after the masses forget how many records they broke or how many championships they won.

When coaches focus on building this eternal legacy, everything else falls into place naturally. Over the course of a career, wins, losses, records and championships are all the result of investing in the long-term success of those young people over whom you wield influence.

“Winning and team unity and excellence are all by-products of keeping your priorities and focus in the right order and the right perspective,” Trimble says. “All of life is a battle to keep the horse in front of the cart.”

The game clock for every football game starts with 60 minutes. There are ups and downs for each team, but only one promise for everyone involved – eventually the clock will hit zero.

What each individual decides to do with the time they are on the field is up to them, but once the game is over, there is no going back. The same is true for the game of life.

“I guess you could say this about life and you can say it about football,” Trimble says. “When you take your last step off the field, you want to know that you’ve done it the right way. That you’ve helped others in the process, and hopefully had a ripple effect on people in all walks of their life.”

This article was written by AFCA Magazine associate editor Adam Reed. To learn more about Coach Trimble, click here. Learn more about coaching Beyond The Game.