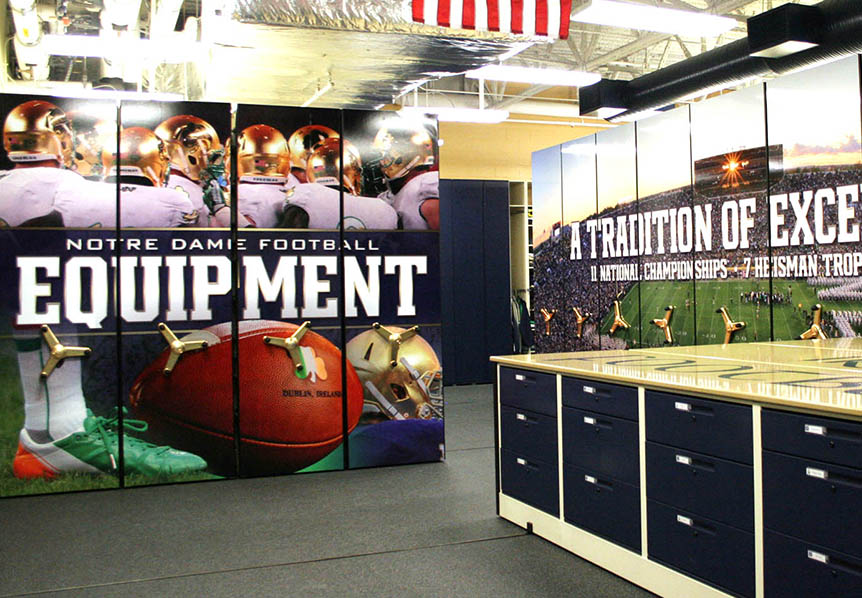 Two years ago, Weber State University in Ogden, Utah, broke ground on a new state of the art athletic complex by asking every fan at the season-opening football game to “turn some dirt” to celebrate the start of construction for the new complex. It was an ambitious undertaking that Weber State officials hoped would become a world-record-breaking event in terms of people involved in a ground-breaking.

The new facilities were set to include strength and conditioning facilities, a new plaza, ticket office, souvenir shop, team locker rooms, football coaches’ offices, meeting rooms and a brand new equipment room. This is a big deal at Weber State, because as James Bell describes it, Weber State’s prior equipment room was one of the worst in the Football Championship Subdivision (FCS).

“Our equipment room used to be the space underneath the bleachers,” says Bell, who is now head equipment manager at Weber State. “I had about 10 feet of head room before the ceiling shrunk down to a point. There was no room to store gear. I had to put our extra shoes in the travel trailer and park it in the lot because I had no place to stack shoes. We went from one of the worst FCS facilities in the country to the best. Today, we are sitting here at an FBS-level facility. From my experience working at Utah State University, where I am sitting right now is right on their level.”

Facilities of that caliber demonstrate to recruits, players, coaches and staff the commitment a university has to its student-athletes, according to Jay Hill, head football coach for Weber State.

“This new facility is critical for our program’s progress moving forward,” he says. “It is fundamental for recruiting and the future development of our players.”

Central to any program’s progress — Weber State’s included — is also streamlining operations within the equipment room. Even on his way in the door to Weber State, Bell identified Weber State as “a university that is making strides to stay competitive in the NCAA.”

As head equipment manager, Bell knew that updates for the sake of updates are all well and good, but where updates really matter is when they eliminate waste, improve safety and efficiency, and streamline operations.

One of Weber State’s early decisions was to include high-density mobile storage systems in the new equipment room. High-density mobile storage systems are large shelving-based structures that typically sit upon tracks and roll back and forth on those tracks with the use of hand- cranks or computer-assisted touchpads. Because they usually allow for access to only one section of shelves at a time, far more storage capacity can fit in a much smaller space.

“It’s a game-changer because it technically doubles your storage space,” says Bell. “Three or four of our Spacesaver shelves are still open. On the one hand, this is because when we were in our old facility, we didn’t have the room to keep as much equipment, so we just didn’t own that much equipment. Now, we have open shelves and I’m fighting to keep those ‘football’ shelves, while others are interested in giving that room to other sports.”

The reality is that Weber State is now coming up on a year since its new sports facility opened, and its high-density shelving has created so much space that the equipment shelves remain open. It’s a great problem to have, according to Bell.

“There’s no way to have the organization and the ease of working unless you have the space to do it, and our Spacesaver shelves give us that. I’m still buying totes to put on these shelves to keep us organized — here we are in August when we get a ton of new product and equipment — but it’s OK because our Spacesavers have opened up so many options that we didn’t have before.”

Chris Bacsik is head football equipment manager for the University of Notre Dame, which also installed the high-density mobile storage system from Spacesaver. As the COVID-19 pandemic set in, Notre Dame went to great lengths to make room for all of the equipment and apparel they ordered last November. The high-density mobile storage system means that equipment managers can keep what they need in the equipment room in the right place and keep it accessible.

“That accessibility is important,” says Bacsik. “If you’re reaching for a 2X t-shirt up there, you want to make sure you’re not pulling out four shirts, so it helps us keep more manageable stacks. Then, if it doesn’t fit up the shelf, the extra space means were not forcing it up there. We can keep it boxed up or move it into our additional storage areas at the stadium.”

The issue with storage solutions and equipment of any type is air flow. The COVID-19 pandemic has taught us all the importance of air-flow and ventilation, whether that’s in a storage system or between student-athletes. For Bacsik, one of the nice elements of high density storage is it helps cut down on potential contamination once the shelving is closed.

“There isn’t going to be a lot of air flow in the system, but anything that we put on the shelf is either fresh from the vendor or freshly laundered, so it wouldn’t get contaminated or come close to being contaminated by anything else,” he says.

On the opposite side of that coin, there is an insane amount of laundry and equipment that flows into the equipment room on a daily basis, and much of that equipment and apparel has the potential to include the coronavirus-containing respiratory droplets we’ve all learned so much about this past year.

A variety of schools, including Notre Dame, have invested in ozone chambers to kill the virus when it contaminates surfaces. Bacsik and the Notre Dame program chose the ZONO Disinfecting and Sanitizing Cabinet from ZONO Technologies for its ozone decontamination process.

Basically, ozone (O3) is a highly reactive gas composed of three oxygen atoms. It is both a natural and a man-made product that occurs in the Earth’s upper atmosphere. It is a powerful oxidant and has many industrial and consumer applications related to oxidation. This same high oxidizing potential, however, causes ozone to damage organic matter in animals and plants above concentrations of about 0.1 ppm. This is important, because it means ozone has the ability to kill bacteria and viruses, and serves as a highly effective decontaminant when used appropriately.

“Our ZONO system is basically a giant cabinet, and we can fit 48 helmets in there at one time on these mobile racks that fit inside the machine,” says Bacsik. “You can have racks for shoulder pads, racks for helmets, and when guys come off the field, they can immediately throw their helmets on the rack and we just push the racks into the machine for a quick, 30-minute sanitizing cycle. It also has a heating aspect to it, so if you have sweaty shoulder pads, it not only sanitizes them but dries them as well. It’s not going to cook and compromise our gear, but there’s enough warm air in there to dry up moisture-causing bacteria.”

Sometimes, the most natural solutions are the ones sitting right in front of you, and this sentiment extends from ozone in the air to software in the cloud. Brandon Devie is an assistant equipment manager for the University of Hawaii at Manoa, and for him, a straightforward equipment management software solution is streamlining his processes.

“At Hawaii, we play our games at Aloha Stadium; we don’t play them on campus,” he says. “So I have about 13 games a year that are either away games or like away games. It’s not realistic for me to keep track of our equipment with an old system. EquipCheck has been super valuable. I especially like that it has an Android app, so I don’t necessarily need an iOS device to use it like most other solutions.”

“Equipment managers serve a lot of different functions in the department,” he says. “If I can reduce the time I’m spending checking things in and out, or digging through Microsoft Excel spreadsheets because I have an app on my phone, then that’s more time that I have to do something productive. On top of that, I can now involve my student workers. I can give them a login and they can issue items and receive items. They can make counts and complete other tasks. They can’t change the names of items or other information I want locked down, but I can let four of my trusted students or my football managers issue items to football players, and I don’t have to worry about doing that anymore.

“It unloads some of that work so I can accomplish other tasks, like working with headsets or doing laundry instead of inventory reports or working with a new sled that just came in. The software allows me to delegate work to someone else fairly easily and then just print a report to give me answers I need.”

Whether it’s storage solutions, sanitization solutions or inventory management solutions, equipment managers are at the forefront of seeking out solutions that streamline the way football programs are managed.

This article was written by Paul Markgraff, managing editor of AFCA Magazine.

When you’re building a football program, you want your focus to be on developing athletes, not on digging for equipment, uniforms, and supplies. No matter what your team’s current storage situation is like, Spacesaver can help you get your equipment organized and protected – without breaking your budget.