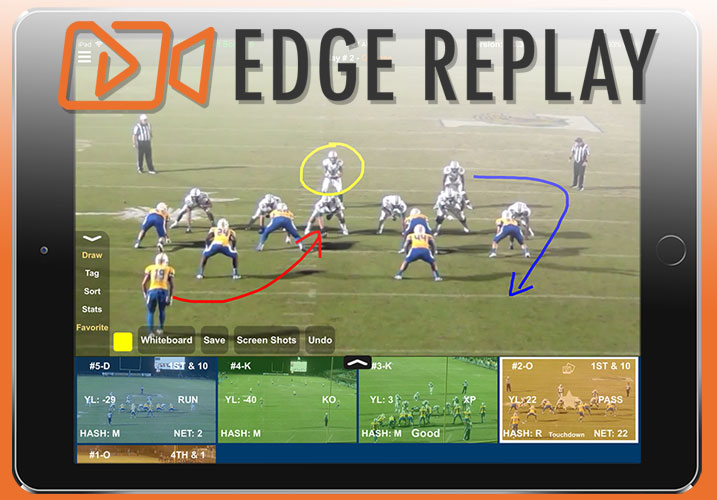 Sideline replay systems have become more and more popular in today’s game. It has rapidly gone from a novelty, to a “nice-to-have,” to an absolute must for programs that are serious about being contenders. Yet, many programs are still searching for the system that can deliver the features they need without breaking the bank.

The EDGE Sideline Replay System from Sport Scope Video is the ideal sideline replay solution coaches have been searching for. Their system combines reliability, efficiency and ease of use with all the features coaches have come to expect from more expensive replay systems.

The genius of  EDGE Replay is found in its simplicity. The system requires less networking equipment, no laptops, and one small, easily transportable case. This simple design not only brings down the cost of the system, it makes it a breeze to set up, and gives coaches the peace of mind they need on game day. Perhaps the most critical part of the system, EDGE Recorders are manufactured with fewer parts, which cost much less to manufacture. Every single EDGE Replay System comes with an EDGE Recorder box for each camera angle and replaces the need for coaches to spend their limited funds on expensive laptop computers.

The EDGE Recorders, combined with the simple, efficient and powerful Sport Scope 3-Point Network, enables coaches to set up and operate the EDGE Replay System from both the press box and end zone camera angles with just one staff member to operate the recordings system with the use of one iPad. After the initial setup, which takes about 30 minutes, coaches typically get the EDGE Replay System up and running in less than  15 minutes. Setup is made easy with the use of three pre-installed cases that make the process easy and intuitive, while also protecting the system from any inclement weather.

Once the system is setup, coaches will receive replays on their iPads automatically. One person can operate the recordings for the system with a single iPad, with the option of using up to 10 iPads if desired. The system also offers coaches the freedom of using unlimited angles.

It’s recommended to have 2 people for best results of controlling the recording capture and live tagging: one person hitting start/stop and one person tagging each play on the Sport Scope iPad app. By utilizing the built-in live tagging in the EDGE Reply app, coaches will receive live game stats, enabling them to filter out their opponent’s tendencies with run/pass reports and more. Does your team have the EDGE? Video and ODK directly into Hudl. See up to two angles on the video player.

Quickly sort clips by tagged information. Save clips to device to show in locker room at halftime.

Upload your synced video clips and ODK directly into Hudl. The edge software does everything for you. Just use the your iPad to record/stop each play.

“When Hudl Sideline failed us when we needed them the most entering the playoffs, I once again began my search for a product that would work. I am excited to say I have found what I have been looking for in EDGE Replay . . .” Protective hard cases to defend your equipment from weather.

Everything pre-installed in individual carrying cases. Replay video clips in 2-3 seconds anywhere in your stadium. No internet required.

Works every time in small and large stadiums.

Quick and easy setup with everything you need included. Save time, space, and money by using the edge recorder instead of a laptop.

No outlets needed for endzone or sidelines.

Does your team have the EDGE?