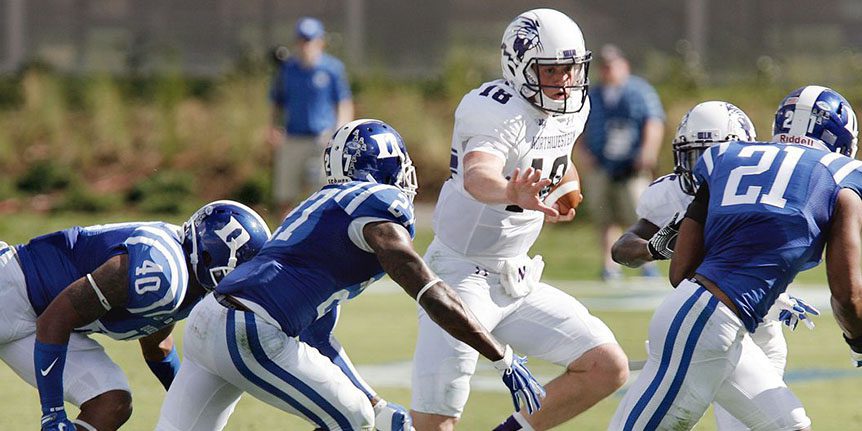 Defensive coaches across the country are charged with the difficult task of defending a wide variety of offenses. From triple option to spread to pro style, our game plans adjust and adapt to put our players in the best position to be successful. One could argue odd fronts, even fronts, man coverages, or zone coverages put you in the most advantageous position. However, none of that matters if your team cannot make tackles. Aside from fumble recoveries, incompletions, and interceptions all successful defensive plays end with a ball carrier on the ground. Schemes are necessary, but the fundamentals of effort and tackling are the most important components to playing defense.

It’s a great time to be a #BlueDevil! #DukeGang pic.twitter.com/86YlGYzIge

RELATED ARTICLE: Everyday Linebacker Drills You Should Be Using

The first step to understanding our Devil Tackling progression is to comprehend the why behind it. As previously discussed, safety is our top concern. There are few opportunities in practice to tackle live. Therefore, we needed a way to work tackling without contact and made an effort to take the defender’s head out of the equation. Those two things will be displayed throughout the teaching progression.

The second reason why we teach Devil Tackling is a direct reflection of reviewing our game film. We used to preach “head across the bow” and practice drills to emphasize this concept. However, these drills were not showing up on film. If tackling defines your defense, and defense is based on leverage, then tackling begins with leverage. This will also be shown in the drill sequence below. Each of the drills you will watch is the first day they were implemented, so you will see some great technique and some we use to coach from. I will review the coaching points for each drill (which will also be show in a slide), but the details of the drills will be evident by watching the drill tape. Each drill will be backed up by game film to demonstrate how these techniques show up in games.

The first drill in the Devil Tackling progression is called “Fit” and is exactly as it sounds. We are teaching the defender how to fit the ball carrier. There are three main coaching points.

In the drill tape, you will see three variations of the Fit drill. We begin the drill on partners to ensure players understand the feel of tackling a ball carrier. We will also use standup bags during the season and progress to moving targets. (See Video 1a)

The second drill in the Devil Tackling progression is called “Roll”. The progression is exactly the same as Fit, but adds a roll at the end. The most important part of executing a roll tackle is to violently roll AWAY from the contact. This keeps the head out of the tackle and limits any yards after contact, which accomplished both of our goals as coaches. (See Video 1b)

The third drill in the Devil Tackling progression is called “Drive for Five.” If you do not execute a Roll tackle, then the tackler must Drive for Five on contact. This means the tackler must drive his feet for five hard steps. Rarely does a defender get five steps in before a ball carrier hits the ground, but this drill emphasizes driving one’s feet through contact. We coach the initial contact very closely in this drill. The tackler must create contact with his near shoulder while his near leg is in the ground. If not, the tackler’s hips are open and this becomes an arm tackle. In the game film, you will see the defender’s feet kick up into the air as he makes a tackle. This is a direct result of the Drive for Five drill as he continues moving his feet through the contact. (See Video 2)

The fourth drill in the Devil Tackling progression is called “Profile Tackle.” This type of tackle is used when you have the profile or side shot of a ball carrier. The coaching points are very similar, but now we will aim for the near pec of the ball carrier. The second example in the practice film shows a mistake by the tackler. He does not land his near leg while making the tackle, which creates an arm tackle as his body opens the gate for the ball carrier to run. While this may result in a missed tackle, we teach our defenders to go into a roll tackle at this time. (See Video 3)

The fifth drill in the “Devil Tackling” progression is called “Run the Angle.” This drill teaches a defender how to properly close ground on a ball carrier. There are several coaching points to this drill. (See Video 4)

The sixth and final drill in the Devil Tackling progression is called “Vice.” This drill teaches defenders how to work together in a tackling effort. The main coaching point for this drill is to “Own Your Hip.” If each defender wins on his leverage side, then the ball carrier has no escape lane. Devil Tackling techniques are still displayed when players are making a vice. The final clip of game film shows one defender executing a Devil Tackle while another defender executes a Profile Tackle. (See Video 5)

The goal of coaching tackling is to get ball carriers on the ground in the safest way possible. Devil Tackling has given our defenders the tools to successfully complete those two objectives. Practicing football has changed in the modern era and we are charged as coaches to adjust our teaching methods to best fit today’s game.