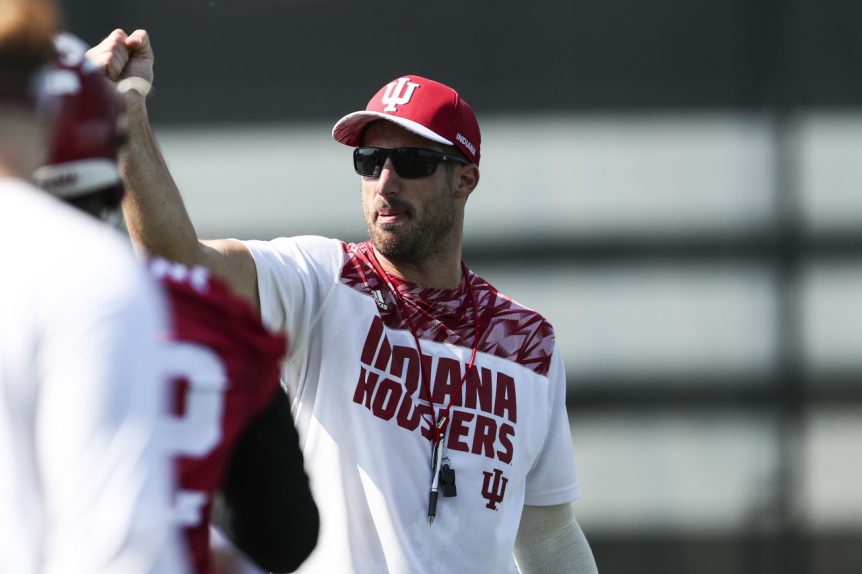 Dwight Freeney, arguably the greatest pass rusher that specialized in the chop-spin move once said, “I’m spinning when I get off the bus. I’m spinning when I get out of the locker room. That’s just me.” As a former player, I was lucky enough to have an opportunity to see one of the greatest defensive linemen of my generation from a teammate’s perspective. For merely a “cup of coffee” of time spent with the Indianapolis Colts, the student-like experiences I had are forever cherished. Dwight became a master of the chop-spin/ice pick over time due to consistent, detailed repetition combined with unbelievable talent. With the success he had in his career with the pass rush move, his confidence in executing consistently was off the charts.

There are fair and just reasons to be fearful of teaching and encouraging defensive lineman as a group to utilize the chop-spin/ice pick move in the pass rush. The majority of testimonies against the move that I have experienced as a player and coach all involve;

While all the mentioned issues have validity, the most impactful for a defensive line is a lack of required athleticism. In that scenario, the focus of fundamental teaching would most likely be spent on different foundational defensive line techniques (Get Off, Strike, Block Destruction, etc.).

Why the Chop-Spin/Ice Pick move?

A defensive lineman must always have a pre-snap pass rush plan in order to be successful. Without a vision of how the move will occur, the path and execution will lack in precision and pace. The beauty of the chop-spin/ice pick is the consistency of having a pass rush plan before the snap, with natural reads that force counter moves off of them.

Masters of the chop-spin/ice pick have earned that ability by focused and detailed repetition. There are an abundant amount of different pass rush moves to choose from based off of ability, but the focused attention to detail on one specific rush move will allow players to play fast and attack their technique. This also allows coaches to teach the specific move more accurately on a consistent basis.

There are certain moves in pass rush that are more favorable to a defensive end than a defensive tackle and the opposite as well. The chop-spin/ice pick is a pass rush move that can be taught to the entire defensive line group. Most defensive lineman struggle with the footwork and body control required to execute the spin/ice pick. One detail of practice that stuck out when working with defensive line coach John Teerlink was the emphasis he put on working moves on air. The theory is simple, if you can’t execute on air, you can’t execute against an OL blocking you! Working on air is critical to creating muscle memory when learning the nuances of movements involved. The movement on air looks very similar to a pirouette in ballet dancing. The repeated practice of pace, violence, and execution of the spin-ice pick is great to work on air and in any environment.

When developing this technique, the next step is to involve an offensive line body presence in the teaching process. The defensive lineman must learn and trust their ability to jump and throw their own back into the OL. The movement is very similar to a basketball player in the post executing a spin move towards the basket. If the spin is not executed into the defender, the big man will be further away from the target rather than working towards the bucket.

As mentioned previously, it is critical that defensive lineman know that they need to develop their initial get off, vertical path and pad level in order to create a consistent image of the outside elbow of the OL on their 3rd or 5th step depending on position and athletic ability. In my career as a player and coach, I have been taught different visual triggers on the OL that initiate a counter move. This includes the head, hip and center mass of the OL. What always bothered me as a player was being told to attack one part of his body with my hands while needing to see a different part of the body. I have found the most success in using the outside elbow as the attack point AND visual key!

The three following reads of the OL outside elbow are made by the 3rd or 5th step of the Speed Chop move; I hope that this article has given you new ideas and coaching points towards teaching the Chop-Spin/Ice Pick pass rush move. It is an effective pass rush plan that allows the players to play fast and attack while giving coaches the tools to coach in great detail with accuracy and understanding. The position of the chop in relation to the outside elbow of the lineman gives a visual key that can be seen and felt during a defensive lineman’s pass rush rep. Additionally, this allows corrections to be clearly understood between player and coach.

Football coaches are teachers at their core. With anything that is taught fundamentally in your system, it is important among players in this generation to know the reason why. Teaching the players the “why” when presenting the Chop-Spin/Ice Pick is critical to alleviate fears and hesitation as a coach, and to minimize critical errors among your players.

Perfect practice makes perfect. In order to develop a pass rusher, and specifically working this move, more reps against different OL sets will create muscle memory when defensive lineman need to counter with the Spin/Ice Pick or Speed to Power.

Lastly, you should always emphasize to the defensive lineman that they should never plan on executing a spin move pre-snap. That affects the get off and pace and can create blurry, incorrect reads off of the outside elbow of the OL. Even the greatest spin move pass rusher of all time, Dwight Freeney, agrees, “It’s a process. If I was just to go out there and say, ‘I’m going to spin, guys,’ they would block me.”

Pat Kuntz starts his first season with the Virginia Military Institute in 2019 after spending the last three seasons at Indiana University as a defensive graduate assistant. Kuntz will serve as the defensive line coach for the Keydets. From 2010-2015, Kuntz was an assistant coach at Roncalli High School in Indianapolis. In the 2014-2015 season, Kuntz worked as the defensive coordinator at Roncalli. Kuntz was a four-year letter winner (2005-2008) and three-year starting nose guard at the University of Notre Dame. He was also named Lineman of the Year in 2007 and 2008 and led the nation in passes broken up by a defensive lineman in 2007.