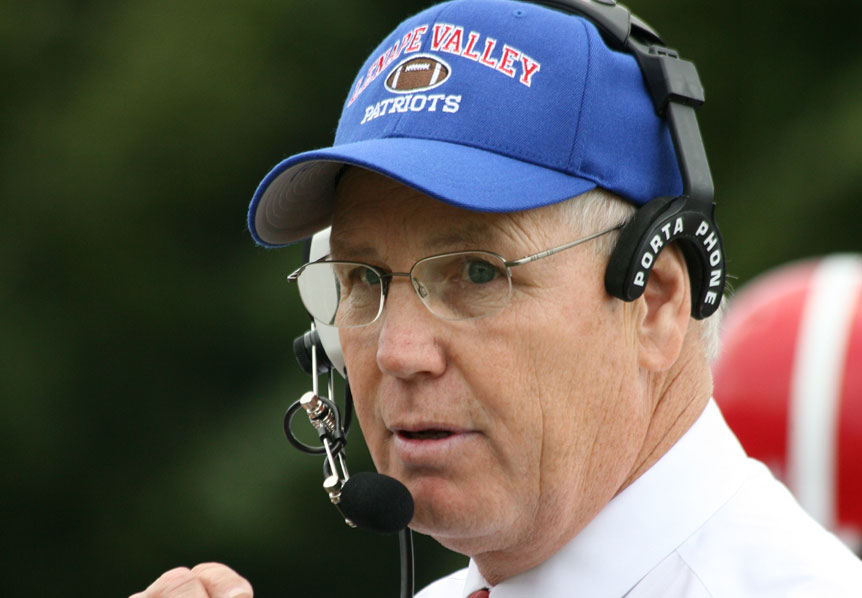 Around the same time, tragedy struck the community when a local two-year-old was hit by a truck and died. The family had no connection to the Lenape Valley football program. Smolyn still made sure the Friday night raffle proceeds that week went to the family.

Four years ago, the wife of the then-Lenape Valley athletic director passed away from pancreatic cancer. Smolyn donated all the funds from his women’s football clinic to pancreatic research.

Outside of his community, Smolyn felt deeply affected by the death of Aaron Feis, the assistant coach at Marjory Stoneman (Fla.) High School who died protecting students in the 2018 Parkland mass shooting. Smolyn set up a weight-room workout in which all players would complete lifts in sets of 21 to memorialize the 21 people who died. Smolyn asked players simply to give up their lunch money for that day to donate to the scholarship fund set up in Feis’ name. Word spread and the team raised $1,400.

He’s had his team raise money for troops returning from Iraq and Afghanistan. He’s organized Division II and III recruiting events for local players — well beyond just Lenape Valley athletes — to earn a shot at extending their football-playing careers.

And amazingly, along the way, Smolyn amassed 348 victories (which made him the active New Jersey leader) in 50 seasons (45 with the Patriots) along with seven state titles and 12 league championships before retiring in March.

For his service, passion for the game, impact on community and excellence on the field, Smolyn is the 2020 AFCA/AFCF Power of Influence Award winner.

“I’m overwhelmed. For me, it’s always been about the Lenape Valley program,” Smolyn says. “My start for this begins back when I was in high school. My high school coaches taught me how to work, how to believe in myself. I coach every day to pay it forward for the way I was coached.

“It’s not just about me. You can’t do this for this period of time without a supporting wife and a great family, great assistant coaches and community. A lot of people have a hand in this award. It’s been an incredible journey … Lenape Valley has been my life.”

Chris Smolyn has seen first-hand the impact his father made on the Lenape Valley community. He joined his dad’s coaching staff in 1986 as team waterboy. He was just 5 years old.

“When you see these families come through with multiple members who have played for him, you see the impact of what Patriot football has meant and my father’s connection to that,” says Chris Smolyn, who also has coached with his father. “One of our big running backs this past year was related to one of the program’s first big wide receivers in the ’70s. There is a family connection. They put their trust in him in the ’70s and ’80s and continue to do so all the way through.”

‘I Never Wanted Another Job’

Smolyn arrived on the Lenape Valley High School campus in 1976 after five years of coaching at Green Brook High in Somerset Valley, N.J. He never left.

“I never wanted another job. Even now, I go to school a couple days a week, and I love walking through those doors,” Smolyn admits. “The people in the community have been so supportive over the years. It’s been a great relationship. I never saw a reason to leave. I never wanted to give up that feeling I had at Lenape.

And while Smolyn may deflect credit, those who have worked with him through the years understand the impact he has had on this football-crazed community.

Pickett, who has coached with Smolyn for the last 27 years, says the 348 career wins are impressive … but not as impressive as the legacy he has left beyond record books and stat sheets. It’s a legacy of caring for players and the community at large.

“The kids know that he cares. It doesn’t matter if you’re the star or not, you’re going to get the same response from Coach Smolyn,” Pickett explains. “Football still means a lot to this community. With 45 years here, you can imagine the number of lives he has touched.”

Caring for the players means holding them to certain standards. For Smolyn, all players must carry the same dedicated work ethic. They must act properly on and off the field — in season and out of season. Their grades must not slip. He holds players accountable and sets high expectations, so they can rise up to meet them. And, when you get knocked down — and you will — you must have the strength to get back up and fight.

“We preach persistence all the time. A personal grit. The determination to never allow your energy and enthusiasm to be dampened by discouragement,” Smolyn says. “You’re going to get knocked down in this game. You’re going to lose games. We’ve been fortunate to be successful. But, there have been losses and tough times.

Adjusting Through The Years

The fundamentals and principles of the Lenape Valley program haven’t changed in 45 years. Smolyn’s Wing-T offense and 4-4 defense haven’t either (his son, Chris, who played for his father in the late 90s as a split end quipped, “I sure would have loved for him to throw the ball more”). But, what has changed, is Smolyn himself.

He says in his first years on the sideline it was “my way or the highway,” but now he talks more to players. He asks them their opinions. He wants to learn from them, rather than just boss them.

“I’ve been more open to suggestions from assistant coaches and players,” Smolyn admits. “On Thursdays, I’m asking the quarterback, ‘What pass do you have the most confidence in?’ Normally in the past, that never would have happened.”

“The difference between 15–20 years ago and today is that back in the day, Don would just tell them to do something, and now he tells them why they need to do it,” Pickett acknowledges.

Pickett also says he’s watched Smolyn go from that old-school coach and adjust with the times, especially in terms of technology. As game film moved from exchanging tapes to online video platforms, Smolyn didn’t balk. Pickett admits maybe Smolyn wasn’t always the most comfortable with it, but he knew it was the future of the game, so he needed to grasp and understand it.

Plus, Lenape Valley was one of the first schools in New Jersey to have instant replay for the officials, according to Pickett.

When Smolyn looks back on his five-decade career, he’s proud of the ways his players stepped up to give back to the community. He knows what the regular-season wins, as well as the state titles mean to the people who love this program. For Smolyn, however, he understands sharing it all with his family has been the best part of this journey. His daughter used to keep stats for him. His wife hosts and cooks a huge dinner for all the seniors on the team. She traditionally bakes treats during Lenape Valley playoff runs.

“There’s been a lot of playoffs,” Smolyn says with a chuckle.

Smolyn’s grandchildren now attend his football camps. And, best of all, the 1999 state title was shared with his son, who was a senior on that squad.

“The highlight of my coaching career was coaching my son. It was the rides back and forth from school,” Smolyn says. “Winning a state championship his senior year, you couldn’t have capped it off any better than that.”