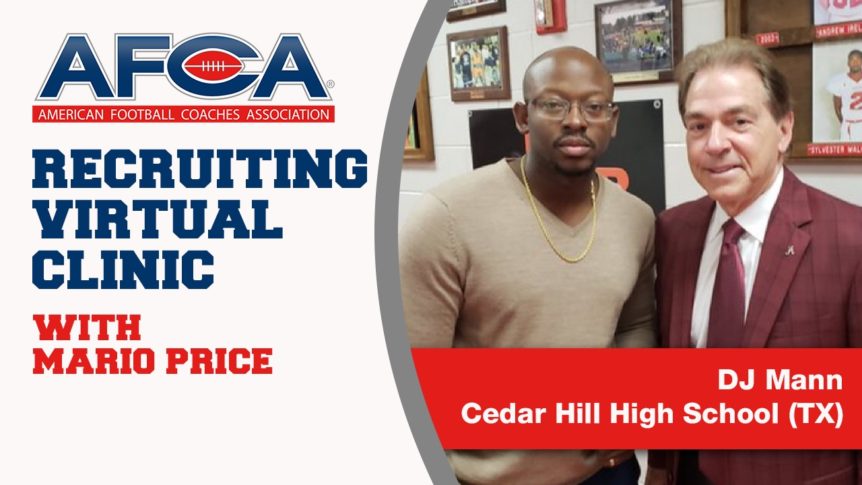 In this AFCA Virtual Clinic, we gain insight into the recruiting tactics at the high school level with Cedar Hill High School (TX) Coach DJ Mann. Coach Mann has been a high school recruiting coordinator for the last 11 years in the state of Texas and has built quite the reputation of using the resources available to get his kids recruited by the next level. The reason why he does what he does is because he gets high satisfaction of seeing those kids and families celebrate the huge accomplishment of signing that letter of intent.

RELATED ARTICLE: How To Successfully Help Your Players In Their Recuriting Process

Coach Mann uses these main principles for recruiting, and he calls them the “Traits to Separate Yourself.”  They are as follows:

The first method Coach Mann uses to gain college attention for his high school athletes is creating buzz by using social media. The main thing is to always have a theme that ties into your class or recruiting program so that anytime you are hit with news about one of your athletes it is tied to a hashtag or theme. The best way to get this to work is to get athlete approval, meaning getting a popular opinion and ensuring that it is attention-grabbing and interesting for the ones you are pushing it out to.

You’ve Got To Have Film

The next part of getting attention for your athletes is one that is very important of course but may also be one that is not necessarily the end all be all in the players’ film. Everyone must have film to support their case of being capable of playing their sport and position. To put that in the perspective of the college recruiter, he sees so many tapes of athletes from all over the world, therefore your athletes must differentiate themselves any way possible, including their game film. Some ways you can do that are:

Academics time and time again have proven to be an area that must have the most discipline during recruitment for a potential student-athlete, as well as those working with that student-athlete. Coach Mann recommends that working hand in hand with teachers and counselors, and maintaining those great relationships are essential for the eligibility aspect of a student-athlete. Keep in mind the sliding scale that the NCAA has as well, if you have an athlete who is a scholar, and has a high GPA, then he would not have to score as high on his SAT or ACT test. Subsequently, if you have an athlete that struggles in the classroom, their test scores need to be higher to offset a lower GPA.

With that information known there are two main things that can help keep GPA’s well above the standard requirements of the NCAA. First, get your student-athletes in the habit of not settling for passing grades. Second, know the academic strengths and weaknesses of your student-athletes, and encourage them to take an honors or AP class in a subject area that interests them. Honors and AP classes have extra weight on their grades and that weight could be a difference between a C to a C plus average. Lastly, and most importantly in the aspect of academics is knowing your 48H and ensuring the courses your athletes are taking fit into that 48H. It is important to know what classes do and do not count toward collegiate eligibility. The best way you can do this is to always get your school’s course catalog and update your 48H with it.

When Coach Mann goes into more detail, as far as dealing with recruiters directly, he points out that all of your athletes must have easy to read prospect sheets. The point is to make sure they are easy to find information on. Use academic information if it would show well to a recruiter. The most vital component about dealing with recruiters is to maintain clear communication. You never want to misinform a recruiter about anything when communicating about one of your athletes’ background, character, grades, etc. That puts a bad reputation on not just you as a recruiter, but on your entire program, as well, which could cost future players the opportunity to be recruited.

Coach Mann says that doing your research on the schools coming in to recruit your athletes helps when communicating because you can learn so much about how schools recruit. One coach may have the power to offer your kid while another would have to talk to the position or head coach about it first. Who recruits in your area and how many kids has he already offered? Also, always keep the communication relationship open the whole year and not just during a season. Recruitment is yearly, so keep up with that coach. Doing these things keeps you in the know, and can catch the attention of the schools who want to give your athlete a chance.

The best way you can be a solid recruiting coordinator is by knowing the most persistent ways to promote and market your players. Don’t limit athletes to a specific geographic range. You should be emailing and contacting schools from coast to coast to find a school and coaching staff willing to show interest. You need to build up a good clientele during the offseason so that by the beginning of the season, you have a clue as to who really wants to recruit your athletes. This is who you will contact multiple times throughout the season. A great way to get buzz for an athlete on the field is by attending camps and combine clinics. Coach Mann talks also discusses the difference in going to the big-time camps like a big Division-I school, or the Nike combine, and going to that mid-level Division-1 or Division II school satellite camp.

Coach Mann does his best day in and day out, and that is how he has been able to secure some very prestigious signee classes that have gone on to play college football.

“Don’t look at the satisfaction of just those big school offers,” says Mann.

He shares a perspective that those athletes don’t judge the scholarship based on the school. It gives them the chance to all be on equal terms by showing that they earned the right to play at the next level, and that should be the goal for all recruiting coordinators, as well. Please check out Coach Mann’s clinic for a strong Q&A by the live-stream viewers.

Don’t forget to check out other content in the AFCA educational library. This content includes anything from drills and coaching tactics to convention sessions and podcasts that can better help you and your football program.