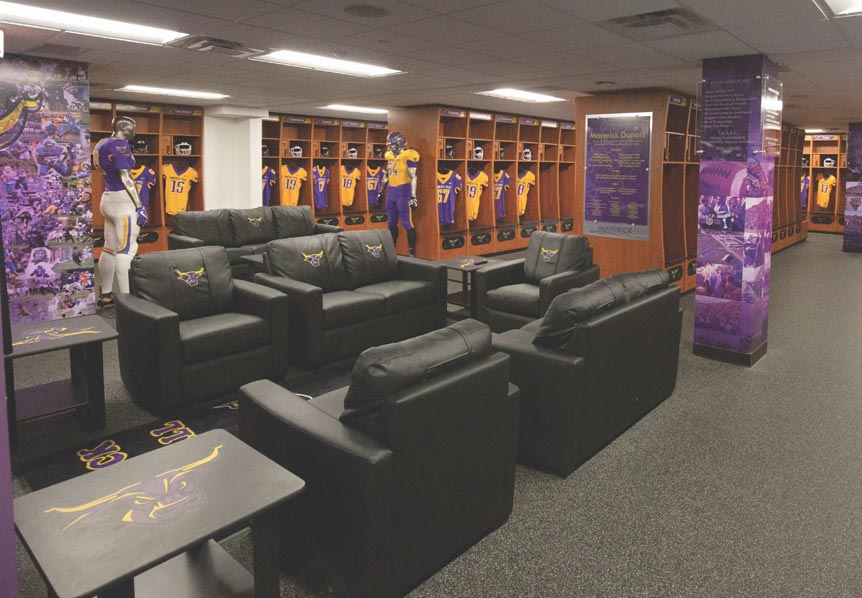 One of the first things recruits and their families visiting a college campus see is the locker room. For that reason, football programs feel the need to impress. Football coaches want their team’s locker room facility to be grand, clean, branded to bear the school’s colors and make the athlete feel proud to be – or aspire to be – a part of the program.

The time had come to replace the 30-year-old metal lockers at MNSU. They were old, rusty and the locker room itself didn’t allow enough space for the athletes and all of their gear.

“We went through a bid process, but we were already familiar with Wenger Corporation,” says Greg Borchert, Project Manager. “They assisted from day one with the design and layout. We had a restricted ceiling height, and they came up with a concept that accommodated our needs and maximized our space.”

“When I arrived in 2008, the locker room was already 10 years old,” says Todd Hoffner, head football coach, MNSU. “The Minnesota Vikings had used it during spring training for years, so it endured a lot of use. The metal lockers were dark and not very appealing.”

“The old locker room was run down,” he says. “We were in here two times a week re-riveting hinges. It was definitely time for a change.”

Hoffner says it took a lot of maneuvering to get in and out of the old locker room, and the layout was not ideal. Each athlete had a 14-inch stool that had to be set inside the locker. With clothing, gear and a shortage of hooks in the locker, there simply wasn’t enough space to accommodate the athletes.

They were hoping for a clean and organized area, with a more centralized entrance, and plenty of space for student athletes to interact, socialize or study.

“We wanted a place for them to call their own so they could be with their peers in a welcoming and comfortable environment,” Hoffner says.

Wenger Corporation’s athletic division sales manager, Mike Mills, invited the team to Owatonna, Minn., to tour the facility where their Elite Wood Lockers would be manufactured.

“You might only get one shot at this in your career,” says Greg Weis, assistant athletic director for development and revenue generation. “This locker room will stand for a long time, so we had to take the extra time to get it right.”

They walked the entire manufacturing floor, reviewing every process involved.

“The tour made us really comfortable with the production value and overall quality,” Weis says. “We knew when we left that we wanted to work with Wenger Corporation.”

The demolition began so the new locker room could take shape.

Some of the mandatory items included:

The new lockers are 7 feet, 9 inches tall to create a big impression, have built-in seats to replace the old stools and have contoured side profiles for a sleek, consistent look.

“We want our student-athletes to experience a first-class program, and it all starts with the locker room,” Hoffner says. “Our mantra is ‘Respect all, but fear none,’ and this locker room conveys that.”

As a bonus, Wenger delivered the lockers one week early, which helped keep everything on schedule.

The new lockers and design of the locker room fits the Mavericks perfectly.

“We are very proud that the MNSU team selected Wenger Corporation as their partner for the renovation,” Mills says. “They brought us in early to assist with the aesthetic, direction and functionality of the lockers. After having multiple conversations with Coach Hoffner, we were able to finalize the design of a locker that met all of the coaches’ and players’ needs.”

“Mike Mills made it a no-brainer for us,” Weis says. “His attention to detail was great. He really made us feel comfortable through ordering, shipping and installation.”

“This locker room has a Division I look and feel and gives us the ability to recruit and solicit talented student-athletes who are playing at a level above ours,” Hoffner says.

The coaching staff agrees that the GearBoss lockers provide the perfect finish to the ultimate team room.