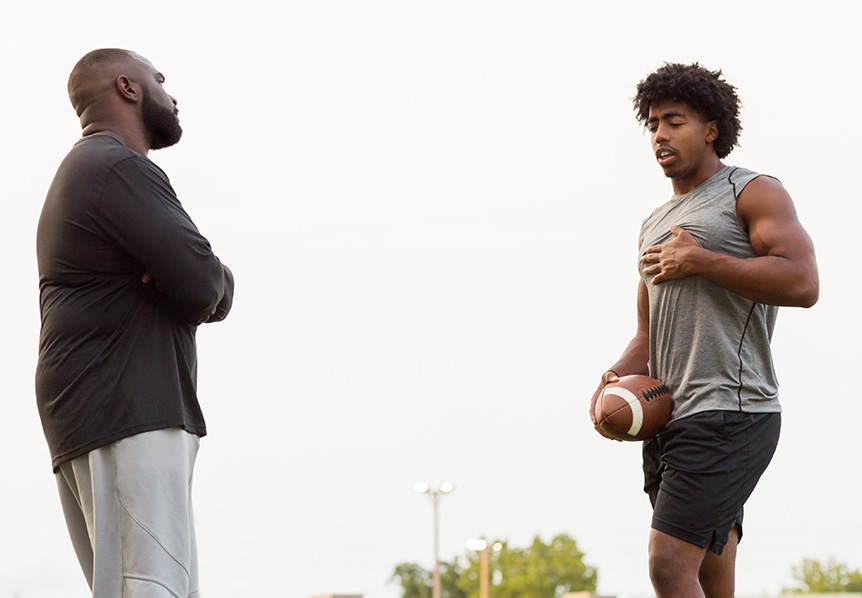 Talking about racism in America has never been easy, due in large part to the fact that slavery has been a part of our history. Though textbooks often identify the year 1619 in the settlement of Jamestown, Va., as the time and place of slavery’s birth on our shores, numerous scholars — including Davidson College history chair and professor Dr. Michael Guasco — point out that explorers brought enslaved Africans with them across the Atlantic Ocean for more than 100 years prior.

Without question, for enslaved Africans ripped from their families and communities, that journey across an ocean in a creaking wooden sailboat was fraught with brutality, crippling fear and sadness, disease, and for many, death. That is a reality of our collective past, and there are no two ways about it.

Without question, enormous strides toward equality among races and genders have since been made for all Americans.

Here we are in the year 2020, with hindsight hopefully more informed, yet not completely perfect. Our ongoing conversation around racism remains incredibly difficult for many reasons, which are often more easily felt than conveyed in words. Perhaps it is best to say in this moment that there are no perfect words, and this discussion will remain ongoing. Maybe it’s best to admit that it is better to have an imperfect conversation with each other than it is to wait for perfect clarity. Clearly, we have difficult conversations ahead of us all that must take place, and maybe, it’s best for us all to take part because, at the very least, we all owe that to each other.

The following paragraphs are in no way designed to be the final word on how to have this conversation, but this conversation is happening now. Hopefully, the information here can help facilitate an honest, open, compassionate dialogue between between coaches and student-athletes.

Over this past summer, I talked with six football coaches across the country about the topic of discussing racism. Some of our discussions were extensive, and there is no way to include everything here, but I will try to include meaningful ways to facilitate this discussion within your program. The three coaches featured here are all from college football programs and are all members of the AFCA. They include:

It is with great humility that I present a fraction of the ideas – just three different concepts – that came out of those discussions, but hopefully these concepts will help inform and invigorate any discussion about racism that coaches may be willing to engage in with student-athletes.

One theme that came up repeatedly during these discussions was a sense that the kids of today share a different approach toward change than people even a generation or two removed. In any discussion of race, it’s important to understand the potential for this evolution in attitude.

RB Green describes himself as “well-versed in the history of the Civil Rights Movement.” He grew up in the middle of it. Raised in Atlanta, Green went to Booker T. Washington High School, the same high school attended by Dr. Martin Luther King, Jr., who played quarterback there.

In late Spring 2020, Green attended the very first meeting with his team’s council on racial equality, a concept developed in part by Navy head coach Ken Niumatalolo, as the director of the council. Its nine members include representatives from the sophomore, junior and senior classes, and student-athletes of as many different races as possible. He walked in with incredible knowledge and began talking about Dr. King and Rosa Parks and civil rights history.

The point the player was making was that while the kids respect and appreciate the history of the Civil Rights Movement, they have their own ideas about how to proceed. Green says they were already organized and communicating. They’d already had a group chat. They were already moving. They just needed him to facilitate. They needed to know how to be heard without being disrespectful to law enforcement or stomping all over other peoples’ rights themselves.

“The players had their ideas of what they wanted to get done; they just needed some help shaping those ideas and learning how to go about it,” says Green. “My title may have said director on paper, but I was going to be a facilitator or coordinator. It was awesome to see and it was humbling.”

On three separate occasions, Mike London broke the color barrier as the first African-American head football coach hired at a predominantly white institution: the University of Richmond in 2008, the University of Virginia in 2010, and William & Mary in 2019. Prior to his career as a football coach, London was also a police officer and detective with the Richmond Police Department.

For London, just being open to having difficult conversations is absolutely critical.

For London, one of the most important aspects of having these conversations about racism is being relational.

“Whether it’s in coaching or anything else, if you’re dealing with people, but especially young people, it’s about being relational,” he says. “People don’t care how much you know until they know how much you care. When you’re a police officer, literally what comes out of your mouth can escalate or de-escalate a situation. For me, living a standard of treating people with dignity and respect was born out of being a police officer in the streets of Richmond.”

Conversations about racism are often a search for common ground, which delivers shared meaning, and shows that regardless of our differences, we are all walking down the same road in that moment. We all travelled different roads to get there, but as we start having this conversation, as we continue it, it’s especially important to listen well, because we each already know our own roads. Only by listening closely can we envision someone else’s path, empathize with it and shine a light that exposes the common ground we share.

“It’s going to take these ‘sit-down’ opportunities, the understanding that we’ll have to develop, the difficult conversations,” says London. “The journey of a thousand miles starts with the first step. We’ve just got to have those steps. If change is going to occur, it’s going to have to occur within the two of us.”

Unfortunately, it’s become easy for any conversation around racism to become charged with cynicism. When two people approach a set of facts from two different perspectives, the conversation can quickly devolve because people’s preconceived notions about those facts shape the way they interpret the initial set of circumstances and resulting events.

How acts of overt and systemic racism make people feel are the driving force behind much of the conversation we’re having today. Those feelings are real and they cut deep, and the sooner we can all understand that fact, the sooner we’ll begin to uncover the common ground necessary for real change.

Van Malone is accustomed to talking about these issues with his team, and his team knows these conversations are coming. As such, Malone does his best to help his student-athletes shape the way they act to effect the change they seek.

Over the summer, after a Kansas State student’s tweet rife with racism about the death of George Floyd prompted outrage across the country, Kansas State football players threatened a boycott of the football program. A week later, after constructive discussions with school administrators, players shared a letter on social media saying they were pleased with “the diligent work of our university and athletics administration as we work through these important issues.” The team didn’t miss a beat as they constructively approached their administration and worked toward common-ground solutions.

Malone knows that emotion can drive the decisions of students and coaches alike, and it’s important that those emotions are channeled in constructive ways.

“What I talk to them about is the fact that this is the moment for them to speak up,” he says. “As they’ve done that, they need to be constructive, even with our players and their boycott. Because, what they want to do is effect change. As they look at leaving their college campuses and step into adulthood to go out and be men in the community, in society, they don’t want it to be the way it’s been. They are doing everything they can to step up.

“What I think is my responsibility, and I share this with them, is to help them be constructive as they speak, to help them have the proper message when they speak, because sometimes, if you don’t convey your message right, then the people you’re trying to reach don’t get the message. It can become counter-productive. I’m not in any way trying to hinder their feelings, but I try to make sure that the message says what they want it to say. They have every right to say what they want to say. But, they have to make sure that what they’re saying isn’t being said to hurt somebody else, because if it is, then they’re no better than the people they’re asking to change.”