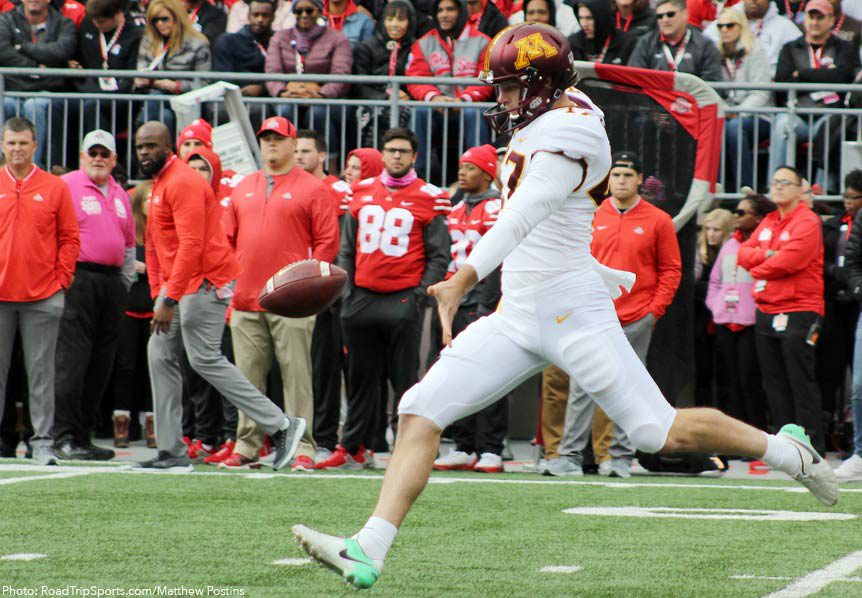 For the punter to perform at optimal level, he must identify each punt’s objective and adapt his punting to the game situation. Every time the football is punted, the punter must have a purpose.

By knowing the objectives of each punt, the coverage team will be prepared and markedly more effective. is being the case, the purpose of every punt needs to be communicated, usually via the coach to the punter and then via the punter to the rest of the team.

Through practice and preparation, the entire punting unit can anticipate the objective of each situation. Sometimes the punter has the option to change the direction of the punt based on the rush. He might change the punt from the line through communication calls just prior to the snap.

Some type of rush toward the punter should be expected at all times. For the punt-blocking unit, the rush is not only an attempt to block the punt, but the unit is also anticipating a mishandled snap, trying to identify any attempt at a fake by the punting team, and ensuring the punter doesn’t intentionally delay getting the punt off.

If the punter is allowed to take more time getting the punt off, the coverage, the outside gunners, will have more time to get down field and cover.

The closer the punter punts from his own end zone, the more he can expect to experience an intense rush. The proximity to the end zone magnifies the rushing team’s objectives and adds the incentive to hurry the punter’s get-off time and rhythm in hopes of forcing a bad punt so they gain an advantage in field position. Even worse, the rushing team might score a quick touchdown after a blocked punt or mishandled snap.

The closer the punter is to the 50-yard line, the less likely the opponents will aggressively rush, in part because they are wary of a possible fake by the punting team.

The football is in the open-field area, usually between the 20-yard line and the 50-yard line. (See Diagram 1) In general, the return team focuses on returning the punt. The punter can expect a moderate to heavy rush.

To optimize hang time and distance while placing the football in a position that minimizes the coverage area.

Always be prepared to direct the flight of the ball to a particular spot to minimize the coverage area and allow the cover team to quickly blanket the return man. Take advantage of the closest sideline when the ball is placed on or near the hash mark. Remember that when you combine precision placement with maximum hang time and optimal distance, your coverage team can cover the entire field effectively.

If the ball is in the middle of the field, or any time there’s an overload or the punter feels there’s too much pressure coming from the outside (the direction he intends to punt), then he needs to immediately consider changing the strategy by punting the ball straight down field with maximum hang time and optimal distance. By punting straight down field, the punter can stay well within the center of his protection. This places him in the safest position to get the punt off successfully.

Every time a punter punts the football, he performs a directional punt, directing the football to its destination. When referring to the strategy of directional punting, it’s most important that the punt accomplishes a purpose that minimizes or virtually eliminates any return and gives the punting team an advantage in field position. In general, directional punts are performed in the open field all the way to or just across the 50-yard line. In this area, it’s crucial for the punter to obtain optimal hang time and distance, enhancing the success of the coverage team and maximizing the distance the opponent must go to score.

By selecting an exact target, the punter can focus his entire punting motion in that direction, thus optimizing hang time and distance.

Beginning with the initial step, everything — steps, hips, shoulders, leg swing, punting foot, and follow-through — should be done in a direct line with and square to the target. The forward motion of the body moving in a direct line ensures the generation of maximum power and control. Proper mechanics can also be achieved when the punter aligns with his target from start to finish.

Some punters, particularly at the professional level, occasionally adjust their alignment in a slightly offset position to compensate for the direction they’ll be stepping in their approach. This offset pre-positions them, so by the time they complete their approach and kick the football, they’re better aligned within their punt protection.

For instance, if the punter is attempting a punt toward the right, he might adjust his stance slightly offset to the left outside of the stance of the long snapper. This adjustment is so subtle the snapper has no problem snapping the football slightly to the left. This simple adjustment allows the punter to receive the snap, complete his approach, and successfully punt the football to the right while maintaining a safe position well within the center of protection.

Punting to the Corner

The football is near the 50-yard line. (See Diagram 2) Because the football is near midfield, an intense punt rush by the return team is less likely because of the increased probability of a fake punt by the punting team.

The punter wants to angle his punting approach toward either sideline at a point between the 10-yard line and 5-yard line markers to place the football inside the opponent’s 20-yard line at a position nearest the goal line.

The coffin corner is either corner of the playing field formed by the sideline and just in front of the end zone. A punter might try to place the ball so that it lands and goes out of bounds or is downed near the corner, thus forcing the receiving team to play very close to its goal line and maximizing the distance the receiving team must travel to score.

The coffin corner punt is a controlled drive punt normally driven at a lower trajectory out of bounds with the intent to pin the opponent deep in its own territory. The punter tends to hold the football on his approach slightly lower and longer before the drop. This natural adjustment produces more of a drive punt that’s more proficient in accuracy and distance.

RELATED ARTICLE: How to Win with Kicking

Because the objective is to have the football land completely out of bounds and off the field of play, minimal hang time is needed (because there’s no threat of a return).

Sometimes a punter attempts to punt for the corner when he’s outside of his range; in this case, the ball might simply roll dead deep in the opponent’s territory before going out of bounds. This might prove effective, but the coverage team must be alert in case of an attempt to return the football.

When punting to the right corner, the right-footed punter needs to consider aiming at a particular point out of bounds that’s closer to the goal line, preferably the 5-yard line.

When punted correctly by a right-footed punter, the ball will spin clockwise and tend to fade to the right as it noses over. By aiming tighter to the goal line, the punter plays the natural fade and allows room for the punt to be effective.

For example, if the punter truly aims at a point directly over the 5-yard line, as the football turns over and begins to fade, it should go out of bounds within the 10-yard line, well within the 20-yard line objective.

By aiming over the 5-yard line, the punter gives himself a 5-yard cushion to either side. This allows him to play it safe and keep the football out of the end zone, avoiding a touchback. This strategy enables him to place the football well within the 20-yard line and actually closer to the 10-yard line.

When punting to the left, the right-footed punter considers aiming at a particular point out of bounds that’s more away from the goal line, preferably the 10-yard line. Again this allows him to play the fade. As it noses over, the punt will fade naturally toward the right and go out of bounds, ideally near the 5-yard line mark or even closer.

This article was excerpted from Football Kicking And Punting, by Ray Guy and Rick Sang, published by Human Kinetics. To purchase the book, please visit https://us.humankinetics.com/.

For more information and special offers, visit our website.