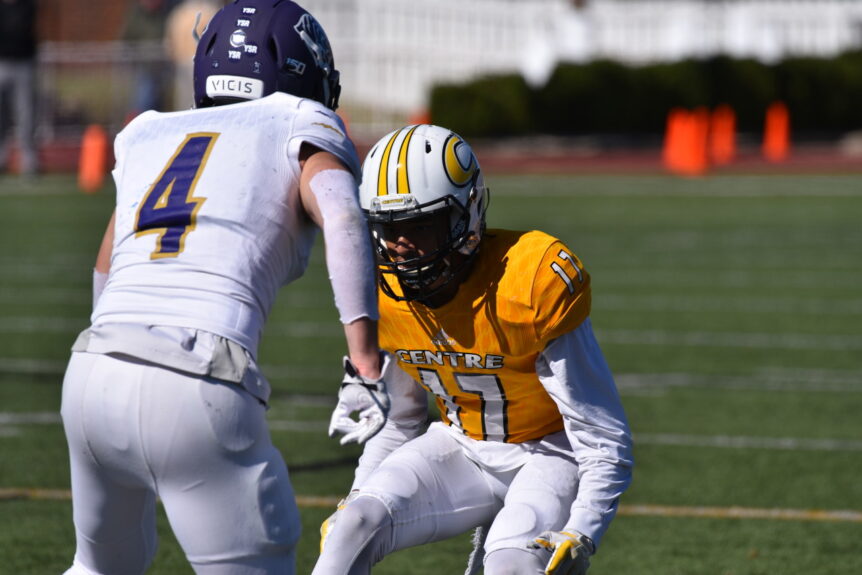 The first rule of being a defensive back in a successful secondary, is learning how to become comfortable being uncomfortable. The position requires you to be in a stance lower than the person you are covering while asking you to run backwards for the duration of the game. You are playing a position where the odds are not in your favor unless you can overcome various forms of adversity. This position reflects the lessons taught in life by constantly reminding us that nothing is given but everything is earned. You must excel under pressure and heated moments to shine like a diamond in this position.

RELATED ARTICLE: Making Adjustments And Coverage Checks With The Secondary

It is important to understand that, as a player in the secondary, you will run nonstop, with periods of isolation. Your confidence will be tested since you will be asked to make everything possible, while always being watched. When you believe you have mastered the position, the rules will change and the style of play you utilize will evolve. There is more to playing defensive back than just lining up and covering the person in front of you. It takes a lot of work that can easily be taken for granted to be a successful secondary unit. Through this article, I will be discussing the process of evaluating defensive backs, the importance of communication and the significance of investing in fundamentals.

Some coaches believe a certain player is a corner while others think he is a safety. While this could be true, gone are the days where a defensive back can just play one position and nothing else. The offensive side of the football has become more creative, when calling plays, with the ability to create mismatches and opportunities. The solution is to find defensive backs capable of being interchangeable within the secondary. In a 4-2-5 defense there are five defensive backs in the game, or a hybrid at the rover position. You want to narrow down how versatile the players in your secondary unit currently are with evaluations. You must identify what they do well, their limitations and other positions they can play within the secondary. This is easier said than done, but there are steps to take when evaluating players in the secondary.

When looking at a safety, you want to determine if they are better at slot coverage, in the box, deep middle of the field or could play corner if asked. You can have an athletic safety that can cover sideline to sideline but if they will not make a tackle in the box or open field, then you have some concerns. It’s no different than if your safety is great at blitzing and open field tackling but constantly gets beat in isolation coverage or is not able to judge a football when it’s in the air. The rover must be physical like an inside linebacker, who is capable of playing the middle of the field and great in isolation coverage. If the rover is struggling in any of these categories, you will have to decide what modifications need to be made defensively for success.

After completing an evaluation on a player, you rank each of them 1-5 based on the information you have collected.

1. Player can only play the position he is currently playing; nowhere else

2. Player has some flexibility, but match-ups could be a concern

3. Player is interchangeable and solid at two positions; can be trusted

4. Player can play three positions, so you can dictate match-ups

5. Player has no restrictions; use as needed

The more flexible you are in the secondary, position-wise, the better your chances are of keeping the best five players on the field.

A. The entire secondary being aware of the defensive call
B. Everyone confirming they are all on the same page with the defensive call
C. Being aware of the down and distance, area of the field and spot of the football
D. Knowing the personnel on the field with the situation
E. Recognizing formations
F. Locating certain players on the field based on the personnel and formation
G. Determining alignment and what concepts to play based on match-ups, wide-receiver splits and divider rules
H. Adapting to motions by using a predetermined check call to make proper adjustments
I. Understanding where your help is or if you have any help on a certain coverage

After initially reading this list, the first thing that came to mind was the way in which I would get the players to play fast without over thinking. Defensive schemes are advancing to compete with offenses that are constantly making new adjustments. You can still be simple and play fast, but your players in the secondary must understand what is going on. What I mentioned above is information that should be second nature to a secondary player. The quick recall skills should be activated. It can be taken for granted that secondary players know how to think like above and will be fine communicating with one another. The thought process can be indoctrinated into them as players with scouting reports, practice situations, quizzes and film study.

Moving from the field to the press box helped me understand how important communication was in the secondary from a different perspective. Not being able to be on the field with your players and personally tell them how to make an adjustment in between plays can be challenging. If players are not asking questions, then start putting them in situations that force them to ask questions. This will allow you, as a coach, to understand what information is being retained and lost in transition with your players.

Athletic ability is a necessity for all defensive backs, but a great defensive back must master the fundamentals. Some of the best defensive backs I have coached were not always the most athletic. Instead they became great at perfecting their craft since their athletic ability would only carry them so far. There is always someone working harder while waiting for the opportunity to showcase their talent. Time will eventually expose a flaw in a player’s athletic ability, or they will compete against someone who is superior to them from a raw talent standpoint. So it is imperative for defensive backs, who are at a physical disadvantage, to perfect their craft fundamentally and mentally by establishing discipline.

The transition from high school to college and potentially the NFL will be about adaptability within your fundamentals. Take the time to ensure players know that details are important, and each practice rep will create good or bad muscle memory. The players must understand that they are working to become a perfectionist. This does not mean you should over coach something because different players have their own unique intangibles. As a coach, you are required to help the player perfect their craft. A player who is allowed to practice bad fundamentals without any consequences will have problems when their athletic ability fails them. Here are some things to consider when wanting to make a defensive back more fundamentally sound:

As coaches, we must teach players what fundamentals are on and off the field. This will provide players a better mental understanding of what is expected of them. It will create clarity and teach players that there is more to football than just relying on athletic ability. It will communicate that they must be true students of the game. Defensive backs must become creatures of habit by formulating muscle memory for success. They must also understand how to react and adapt by using other skill sets beyond athletic ability, while remaining calm and poised, when adversity strikes.

RELATED ARTICLE: Win Before the Snap: Why You Should Build a Pre-Snap Heavy Offense

Being a defensive back is not easy and creating ways to effectively produce positive results on a consistent basis in the secondary is even harder at times. It is crucial that we, as coaches, understand how to evaluate the best guys to play in the secondary unit. We must reemphasize and stress the importance of communication and how it will help dictate success. Student-athletes must understand that they are truly students of the game and relying solely on athletic ability does not always guarantee a positive outcome. Our challenges will continue to grow in the secondary as coaches, but we must continue to stick to the basics and invest in core concepts.

Warren Wilson joined the Centre College football staff in the Spring of 2018 as the defensive backs coach. Prior to the 2019 season, he took over as the Colonels’ special teams coordinator.

From 2010 to 2014, Wilson coached in the high school and college ranks primarily working with secondaries. He also has Division III experience, having spent time at LaGrange College as the special team’s coordinator, recruiting coordinator, secondary coach and junior varsity head coach.