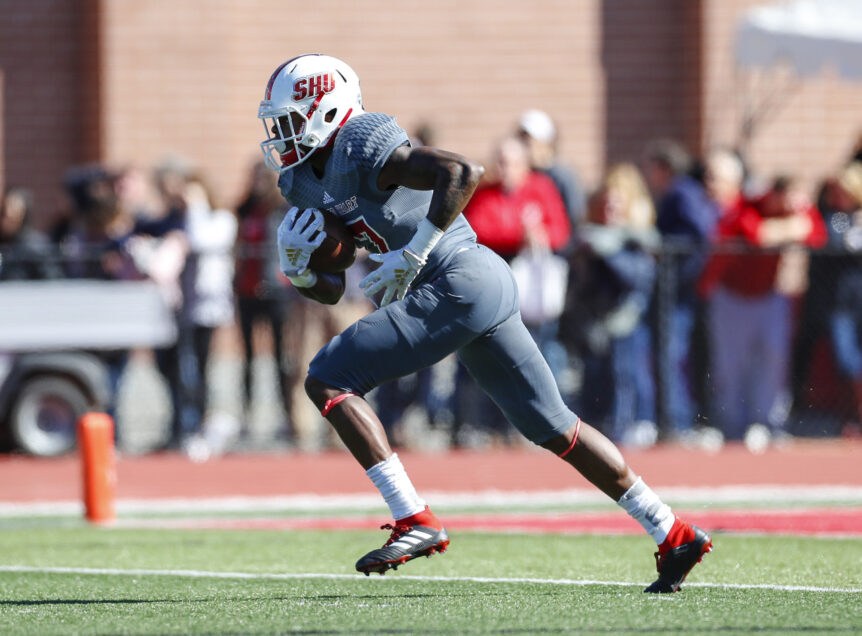 So many times, with special teams, we fall into the trap of over complicating our schemes and trying to fit into the “Mad Hatter” role. However, using a simple return that allows each player to block the same kickoff cover opponent no matter where the ball is kicked can lead to great success and confidence within your players.

Philosophy & Goals for the KOR Unit

During the first meeting going over the kickoff return unit we discuss the goals and philosophy with the team. Our philosophy is to be an explosive return unit, reliant on speed, technique and effort. We can employ a sideline and middle return within base schemes.

There are four goals that we have for the kickoff return unit. The first is to field all kicks cleanly. The second is to give the ball to the offense every time. The third goal is to average a starting position for the offense on the 35-yard line. The final goal is to be penalty free during our returns.

For the front line, the tackles are the widest players. They aligned stacked with the L2 or R2 of the kickoff team. They have their back foot on the +49-yard line. Their feet are staggered in, looking at the ball with a slight bend in their knees, and their hands are ready to play the ball. For their drop, they are going to push off the front foot and gain ground with their back foot.

The guards are the players that are closet to the ball. With the ball in the middle of the field they will align by splitting the football and the nearest hash mark; other alignments will be based on game adjustments. They will also align with their back foot on the +49-yard line, their feet staggered in, looking at the ball with a slight bend in their knees. They also need to have their hands ready to play the ball. Similar to the tackles for their drop they are going to push off the front foot and gain ground with their back foot.

The ends are the final position of the front line; they are aligned even between the tackles & guards splitting the -40- yard line with their feet staggered in looking at the ball. They also have a slight bend in their knees with their hands ready to play the ball. Similar to the tackles and guards, for their drop, they will push off the front foot and gain ground with the back foot.

The first thing that the front line must do is see the ball kicked, if they were to leave beforehand that could give the kickoff team an advantage and potential surprise onside attempt. They need to understand the distance & direction that the ball is kicked. To do this once they see the ball kicked, they get their eyes right to the returner to better understand where the ball is going. This will allow them to adjust the angle and depth of their drop to gain leverage based on where the ball is kicked. Finally, when they engage with the cover man, they need to absorb their target with proper leverage, making him run through the middle of their body. This will allow them to redirect the cover man away from the return and finish their blocks.

For the blocking, once they have hit their drop landmark, they need to keep their feet wide and active to maintain balance and the ability to move with their target. Use a FIT position and strike with their hands & hips, using a punch and at pad level. The aim point is the inside number of the jersey of the cover man, with their thumbs up and elbows in.

RELATED ARTICLE: How to Win with Kicking

For the back line, the fullbacks are aligned in a two-point stance staggered in at roughly a forty-five-degree angle towards the football in a ready position. Their eyes need to be on the football to see it kicked and their hands need to be ready to react to a pop-over or squib kick. They are aligned four yards on top of the -25-yard line.

Diagram 4: Fullbacks, 4-yards on top of the numbers, ready to play a specialty kick

The “Rattlesnake” is the next position and arguably the second most important position to the returners themselves. This is the next best “Returner”, who can handle the ball extremely well. Their stance is in a two-point stance, square to the kicker with their eyes on the football and their hands ready to play a specialty kick. We have also had this player look at the laces of the ball to see if they are pointed a certain way to give away a directional kick or specialty kick.

The objectives for the Fullbacks & Rattlesnake players are to have great relation to the ball and their cover guy; similar to an offensive blocker we want them on the ball side of their opponent. They will use our FIT position, striking with their hands and hips, and work to sustain their block.

For the backline players we talk a lot about their return procedures, having them understand how to react to the ball being kicked as well as being able to listen to the returners behind them making the calls. For a deep kick, we tell them that is a ball kicked over their head and called for by the returner; when they hear the returner calling for it they go into blocking mode and execute the assignment of the return that is called. Just like the frontline players, once the ball is kicked and they see it is over their heads they get their eyes to the returner immediately; this will allow them to get the proper direction of the kick and give them the best leverage on the cover man.

A short kick we have them act aggressively and recover it if they can, if it is coming at them too fast we tell them to let it go and get into blocking mode to the first opposite player they see. They will only field a pop-over or squib kick if the returner makes a “short” call. Another important piece for the backline is that they need to be able to listen to hear the call from the returner; sprint to their assignment and be precise. They need to be physical by bringing their feet and running through contact; and understand angles being the low man and playing with leverage.

The final two players are the returners for their alignment it will be based off of what the opponent has shown to do with their kicks. For a directional kick team, we will place the off returner 3-yards inside of the near hash and the returner being kicked to 3-yards outside of the hash on the -5-yardline. This can be adjusted based on the kicker’s leg strength. The biggest reason for shifting them is to allow the returner a chance to get to the location of the ball square his shoulders and catch the ball going forward.

There is some communication that is used by the returner; in our case we always have the right returner make the call. The “Me, Me” call is when the right returner is going to catch the ball; “You, You” is when the left returner will catch the ball; “Short, Short” is for the short kick in front of the Rattlesnake. The biggest procedure for the returner is if he fields the ball cleanly, he should get vertical immediately.

For identification of the kickoff cover men the defenders are counted from the sideline in; one through five; the L1 is the farthest outside player to the left as the Kickoff return team faces the kicker. The count never goes past 5; either the L5 or R5, if the Kickoff team has a 6 & 4 alignment, then the L5 or R5 is on the other side of the kicker. For this return they will block whoever is in the position when the ball is kicked, if a team uses a twist or switches post kick that will be handled on a game by game basis.

Diagram 6: Kickoff cover ID; Outside working in is labeled 1-5. Count does not go higher than 5

For the back line, we use double teams. However, with recent rule changes we had to change how we deploy the double teams. The Rattlesnake drops 10-12 yards over top of the returner and will block the R5 with the left full back. With this double team the full back will make contact first and then the Rattlesnake will join the block after the ball has been caught by the returner. The left full back is going to drop to the -15-yard line the direction of the kick and he will block the L5, once the ball is caught, he will get help doubling the block with the off-returner.

The off-returner must make sure the ball is caught and then get to his blocking assignment. Once the ball is at helmet height of the returner the off-returner will yell “Go..Go..Go”, which will alert the full backs to engage their assignments. With the ball in his hands the returner must work up the field for 3-5 hard steps before working to split the double teams’ blocks. The returner needs to work to set up his blocks and have an understanding of the entire return scheme. 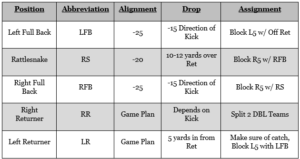 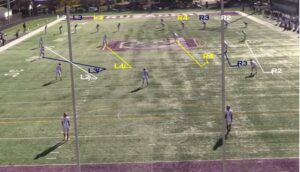 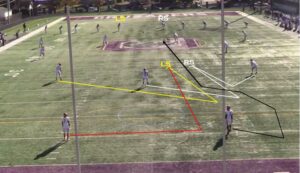 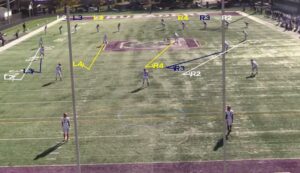 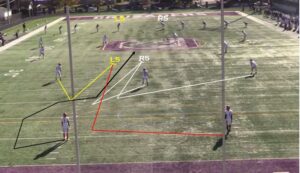 Brad Watkins joined the SHU coaching staff in 2019 as an assistant coach, working primarily with the running backs.

Watkins spent the 2018 season as the director of football operations, and special teams and run game coordinator at Nichols College, where his kickoff return unit was the 15th-best in the nation in terms of yards per return (24.07).

He spent the 2016-17 seasons as the defensive line and special teams coach, as well as the strength and conditioning coordinator at Wilmington College. Watkins also served as the interim head coach of the Quakers from November, 2016 to December, 2016.

Watkins spent the 2013 and 2014 seasons at Ohio Northern University, where he first coached the defensive tackles and served as the punt coordinator (2013) before coaching the running backs and serving as the JV head coach and offensive coordinator (2014).

He began his coaching career as a volunteer assistant at ODU (2010-12),  where he created weekly special teams reports for all six phases, broke down practice video for special teams, and assisted with winter and summer workout programs. In 2013, Watkins was promoted to running backs coach and assistant special teams coordinator for the Monarchs.