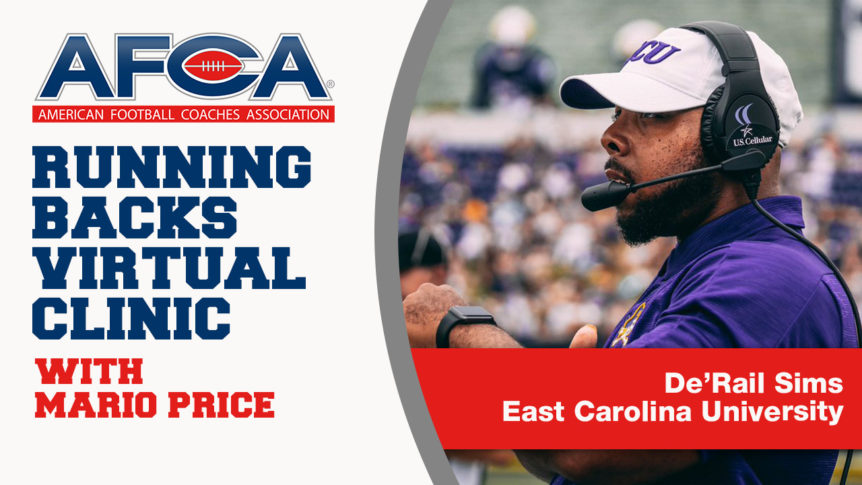 In this AFCA Virtual Clinic, De’Rail Sims, the running backs coach at East Carolina University, discusses his philosophy for the running back position, as well as everyday drills that translate to success in games.

At ECU, Coach Sims strives to create a winning mentality for the running backs. One way he establishes this mentality is by detailing the running back pedigree with three foundational principles, which include:

Coach Sims said from the way that you walk into the room to the way you “teach the teacher” on the whiteboard, you want to win and excel at everything you do. He also believes the old adage that you are one play away from being that guy, so it is crucial to take advantage of every opportunity, while never coming in second place to the person in the mirror.

Coach Sims explains that if you are obsessed with something then you have a tremendous passion for it. This is why he elects to use the term “ball obsession” over the commonly used term ball security. In order to play, you must be able to block and pick up the blitz. Knowing assignments allows the player to play fast and confident with natural instincts.

At ECU the running backs are expected to get 1% better each day. They accomplish this by recruiting better athletes each year so there is always competition in practice. It is also important to win in space.

“I always tell my guys that good backs get what offensive lineman block, but the great ones go get past what the offensive linemen block,” said Coach Sims.

It is vital to not make the same mistake twice with negative plays. Obviously running backs (and any position for that matter) strive to minimize the damage of negative plays. Coach Sims also highlights the importance of paying attention to details with a savage mentality. Part of this attention to detail includes ball obsession. The football should be carried against the ribcage and close to the heart with the wrist above the elbow. The tip of the football should be up by the running backs’ chin with the rest of the ball against the body, closing the backdoor on any defender trying to get a hand on the ball. The Pirates work on this throughout numerous position drills, some of which Coach Sims decided to name after NFL running backs.

This drill develops awareness to be able to regain balance after being knocked down to one leg. To execute the drill, bend over at the waist and place your hand that is opposite of the ball out in front of your face mask with your fingertips touching the ground. Then lift the leg (that is opposite of the ball) off the ground and get three “pops” or hops in, exploding out in front on the one leg, raising the chest and eyes to the sky. It is important to keep the ball tight to the body.

Up and Out Drill

The purpose of this drill is to focus on keeping the ball tight to the body while getting up off of the ground, as well as controlling the ball while going down to the ground. The running backs will lay down with the ball and get up in an athletic position bursting out 10 yards.

Take It With You Drill

This drill focuses on keeping the ball covered with the off-hand and sprinting while keeping the ball high and tight. The players will receive two commands. The first signifies a cut where they should jump up and cover the ball; and the second is to spring out continuing to cover the football through traffic.

The focus of this drill is on ball obsession close to the chin while maintaining good leg drive as a defender tries to make a tackle. The running back should start with a football in the right hand and left hand. Then teammates on each side of him should try to strip the ball out, while another teammate is behind him pulling him back to help emphasize the leg drive.

The objective for this drill to is focus on finishing off the run by fighting for extra yardage while maintaining good leg drive and pad level. The way this drill works is the running back will start with the ball high and tight while under a shoot with two defenders holding hand shields in front of him. On the whistle, he will accelerate through contact fighting for extra yardage. You can also add the blaster in the middle of the drill for resistance, as well as a change of direction component at the end.

Incorporating bag drills into practice allows the players to work on multiple things in a short amount of time. Typically, bag drills will always work the players’ eye discipline, as well as their ability to pick their feet and knees up to continue driving and making cuts. Coach Sims took some time to explain the importance of some other bag drills he uses throughout practice.

Q: What do you want to see in the first few clips of a running back with his highlights?

Q: What is your philosophy on playing multiple backs? How do you keep your number two, three, or even four guy engaged?

A: I rotate them every two series and then whoever got the hot hand is who we stayed with. We aren’t trying to win the game in the first and second quarter, but in the third and fourth quarter.

Q: How do you take advantage of your pre-practice and post-practice with your backs?

A: It depends on how much individual time I get on a given day, but usually we’ll work on catching in pre-practice, as well as ball security/ball obsession.

Q: What questions do you ask your backs after a series?

A: I always ask them to tell me what they are seeing because I want to see if it matches up with what I am seeing. If It matches up with what I’m seeing, then I ask them why they are seeing what they are. I also ask them if they hear the offensive linemen’s calls because we try to teach our running backs to know the calls, so they can anticipate where they can hit at when the ball is snapped.

Q: What is your pre-game routine with the backs?

A: Number one we will do Stance and Start, number two is Barry Sanders Drill, number three is Beast Mode, then we’ll do some form of blitz pick-up, and lastly, we’ll work on catching some flare routes or check down routes.

Q: What is your favorite run play and why?

A: My favorite run play is inside zone because it’s a “feel play.” I know a lot of times it’s designed to go frontside A gap, but you never know where the ball will hit at whether it’s frontside A gap, backside A gap or backside B gap.  I think it’s a nasty physical play.

To watch Coach Sims’ Virtual Clinic, along with numerous other videos, please log in to your AFCA membership account and search through the AFCA Educational Library.