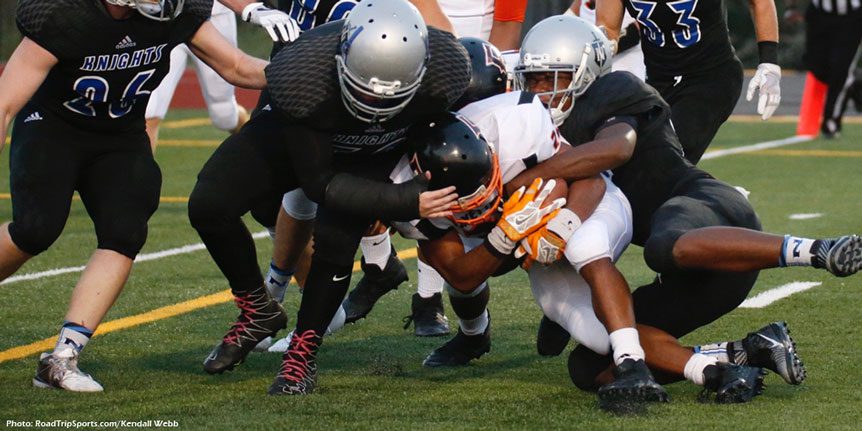 Over the years, we have compiled a list of thoughts, ideas, and philosophies on coaching defense. We had come up with a myriad of goals, objectives, and concepts that we wanted to stress to our players but could never come up with a simple way to communicate all the different aspects of what we wanted to achieve and how we wanted our players to play on defense. This all changed with the visual creation of the Defensive Pyramid of Success.

The pyramid was born out of one simple goal we wanted to achieve: Keep the offense out of the end zone. While there are a host of goals worth shooting for (limiting total yards and offense gains, stopping 3rd down conversions, stopping a key player), the ultimate success of a defense rests on the concept of preventing the opposing offense from scoring, referred to as scoring defense by both the NFL and NCAA. The top NFL and NCAA defensive units are usually at the top of list the in terms of scoring defense.

In order to achieve this goal of preventing a team from scoring, we start with what we feel are the best ways to do this: stopping the run and limiting explosive plays.

While it is impossible to defend everything an offense can throw at a defense, we feel focusing on stopping the run is the quickest way to make a team one dimensional. By focusing on taking away the run, we do several things. One, we take away the offensive’s ability to control the clock; two, we limit their ability to dictate the pace of the game; and three, we frustrate the offensive unit’s ability to have confidence that they can simply run the ball.

By limiting explosive plays, we can ensure that the offense must consistently move the ball in small chunks, which can be very difficult to do over the course of the game. We define explosive plays as 12-yard rushing plays and 16-yard passing plays. The success of the defense increases dramatically if we can limit their explosive plays.

In order to achieve these two objectives, we must focus on the following: block destruction, perfect tackling, and causing turnovers.

Block destruction, by definition, means getting off of offensive players who are attempting to impede our ability to get to the ball carrier. When we engage an offensive player attempting to block us, we stress attacking half the blocker by using a blow delivery by striking with the heel of our hands, thumbs up, elbows in, and locking out. Once this is accomplished, we stress that the players use one of three techniques to disengage from the blocker: throw away, rip, or overhand punch. We allow the players to use the technique that they feel the most comfortable using.

Causing turnovers involves the second man in on the ball carrier executing a club or strip on the ball. This is only done once a ball carrier is secured by another player. We stress that the players will only cause a turnover if they attempt to punch or rip the ball out each time they are involved in a tackle (the more shots we take, the more likely we are to get the ball out). While there are instances where a single tackler may be in a position to cause a turnover, we only stress this if a score is imminent (i.e., the ball carrier is about to cross the end zone or is about to catch a ball in the end zone), a ball carrier does not see us coming (i.e., sacking a quarterback from behind), or the game situation dictates we need the ball back (i.e., we are behind on the scoreboard and time is limited in the game).

In order to put us in a position to achieve these objectives, the following aspects must be accomplished: alignment/assignment, read keys (eyes), react (technique), and relentless pursuit.

Alignment and assignment means that the defender must get lined up correctly and must know his assignment for the call given. It is critical that each player knows where he is supposed to be both pre- and post-snap and know what his job is before the ball is snapped. This is accomplished with chalk talks, film sessions, and walk-thru periods on the field.

Reading keys means that the defensive player must have his eyes on the offensive player that will cue him in to doing his job. He must be focused on his man so he knows when to move, which direction to step in, and where he must go based on the call given. This concept also involves recognizing blocking schemes the offense is using, identifying pass drops of the quarterback, and reading route combinations receivers are running.

React tells the defender what technique and movement pattern to use, based on what his key read has given him, in order to put himself in the best position possible to do his job. This will involve what direction to step, what block destruction technique to use, and how best to tackle the ball carrier. This allows the player to have confidence in his role and fit for defending the offensive play.

The Defensive Pyramid of Success was created by years of experience and knowledge gained through the insights of clinics, coaches, and players on what they feel leads to successful defensive play. This visual gives us a simple way to communicate and teach our players what we need to do in order to give us the best chance possible to defend the variety of offenses we see each season.