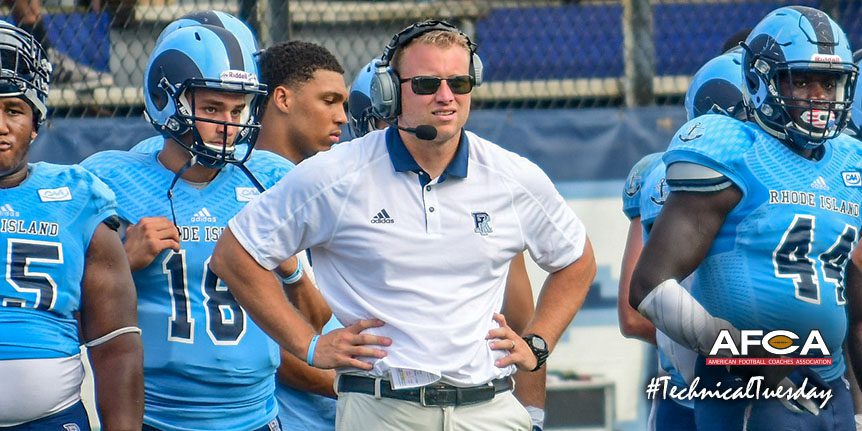 Defending the spread at the University of Rhode Island (URI) starts in the Nickel personnel defensive package. Nickel defense is comprised of 4 defensive lineman, 2 linebackers, and 5 defensive backs. In order to defend the run game and cover the pass game effectively, Nickel is played against 11 (1 Back/1 Tight End) and 10 (1 Back/0 Tight End) formations. This personnel helps to be creative with multiple blitz packages (man or zone), coverages (man or zone), and disguises (playing cover 3 or man in a 1 high safety structure). It also puts one more athlete on the field who can cover the opponent’s best athletes.

Spread offense has evolved into a number of different variations that require simple, sound principles defensively. These defensive principles must have built in adjustments that counter great players, protect defensive liabilities, and have answers for offensive adjustments. These adjustments are the lifeblood of any great defense. Unwritten rules of defending the spread effectively are great eye control, sure tackling, and fanatical effort.

Some of the most effective spread offenses use a “no huddle” or “check with me” pace that stresses defenses to get aligned. The way to offset tempo offenses are with the simplicity of defensive signal, a no-huddle defense, and a “mayday” check. Using defenses that are called with one word that encompasses front mechanics, linebacker alignments, and coverage, will lessen panic and confusion. No-huddle defense makes players responsible for getting the signal from the sideline, then understanding the offensive formation and tendency with a high football IQ. When offenses are going at a pace that does not allow defensive players to see the call, a mayday check can be implemented. This is a single defense used weekly. It is dictated by game plan and has a universal signal. The top priority in defending any offense successfully starts with playing run defense effectively. A critical component to limiting the run game is the alignment of the defensive line. The base alignments for the defensive line are crotch alignments, meaning their down hand will align down the midpoint of their visual key. This alignment will affect the jump through of offensive linemen to linebackers, helping them stay clean and give them the opportunity to take two (blockers with one player). In (Diagram 1) the defensive end should take the tackle and the pulling guard.

Our techniques are heavily based on the look the offense gives (formation, backset). Various spread offensive schemes have tendencies that offset the back or place the back at different depths based on the offensive play executed. The two pieces of critical information pre-snap are: 1) depth of the back and 2) if there is a Y-off or player carrying an extra gap in the core (attached group of players in the majority of offensive formations). To take advantage of this, a simple numerical system helps communicate the type of run variation to anticipate. Back to the 3 Tech: If the back is set to the 3-technique side, he will tighten to prevent the scoop. The Buck will play squeeze technique. He will be responsible for the quarterback verses zone read. The nose will play a 2i-technique, which widens his gap and helps him play the scoop. The end will play a crotch alignment on the tackle and set the edge. (Diagram 4) Back to the Nose (1 Tech): With the back to the open B-gap, the nose will play a shade on the center. This will make it more difficult for him to be scooped. The 3-technique can widen his alignment anticipating a reach. The defensive end will use chase technique, exchanging gaps with the linebacker. The Buck will play a crotch technique on the tackle and set the edge. (Diagram 5)

Gap Displacement Calls: Gap displacement calls are used as an important adjustment to defend spread offenses. They make controlling the run game more doable for our conflicted player/players who must defend both the run (in the run fit) and the pass (in coverage). Moving a gap closer to a conflicted player make their responsibility achievable. These calls come from the linebackers and are communicated to the defensive line. When executing gap displacement calls, we use two terms: make the trip or redirect. These two terms are based upon backset depth, backset width, and offensive tendencies. These two terms resonate with players and give them a better understanding, pre-snap, of the alignment of the back and how to execute footwork, which ensures they can do their job well. Gap displacement calls are also tied to the pass game. Pass-rush games must be executed with these calls. The defensive end will be responsible for a one-gap movement. He will alert the nose, pre-snap, with a “cover me” call. The nose will see him “cross face”, which triggers him to exchange pass-rush lanes. (Diagram 7)

Against a spread offense, the linebackers need to get aligned efficiently, get the front set, and understand run/pass responsibly in a matter of seconds. Therefore, built-in rules help us execute this quickly and effectively. Linebacker alignments will be based off of field/boundary. They will start in “home alignment” (against 2×2), this will align them in 30 techniques (outside shade of the offensive guards). The Mike linebacker will line up to the field and the Will linebacker will line up to the boundary. If the ball is in the middle of the field, we will align based off the safeties strength call. The stress player (Nickel) will align apex between the slot receiver and the end man on the line of scrimmage. Linebackers will use their triangle read to understand the different types of run and pass concepts spread offenses can use to attack them. We tell them to “see short” (the offensive line) and “feel deep” (the tailback to the mesh). This helps them react to high hat and low hat, and see any type of pulling offensive lineman. Linebackers will fit against the run game by taking their gap against a hard double or falling back against a jump through. (Diagram 8)

In the secondary we must be able to defend the threat of Screens, RPOs, and Play Action Pass. These conflicts are handled by a variety of different coverage checks. In Nickel defense, these coverage checks put a safety in the run fit. He is responsible for the D-gap (the widest gap in the core). This affords him more time to react to his run/pass reads and be effective in our vice coverage concept (Diagram 9). At corner, playing press and press bail gives the opportunity to take away any type of screen (bubble) option based off of corner leverage and alignment. Corners will “taxi” their alignment, creating a distorted read for the quarterback. Taxiing alignments gives the opportunity to show one look pre-snap and move to the best pre-snap alignment when the cadence starts. This is a technique built in with linebackers and safeties as well. It creates uncertainty for an offense when it is reading players in RPO schemes. It is critical that players don’t let their disguise compromise their assignment. This means that players must be in the alignment to do their job once the ball is snapped.

Examples of Defensive Structure against the Spread

Against 2×2, “double vice” will be played to the passing strength. Vice coverage puts the safety outside the Nickel, making the Nickel extra in the run fit. He will wall any inside routes and double a vertical by No. 2. The Mike and Will are responsible for the inside gaps on their side of the center. They have gap displacement calls available to them if they are conflicted. They will combo cover the running back and tight end. The corner has No. 1 man. If No. 2 immediately goes inside, the strong safety can give the corner help on any vertical by No. 1.

“Vice” is played away from the passing strength. This makes the free safety the aggressor to the tight end/flanker side (Diagram 9) and puts him in the run fit (D-gap). Against the pass, the free safety will drive inside routes by No. 1 and “double” any vertical. The Buck will disrupt the tight end (putting hands on) release, giving the Will linebacker time to go from his run fit (A-gap) to his coverage. The Will can use a gap displacement call if he feels conflicted by having a run gap (A-gap) and No. 2 to the flat.

Against 3×1, we will play “double vice” to the Passing Strength. Vice is played on No. 2 and will put the Nickel in the run fit. He will wall all in breaking routes and double verticals from No. 2. The Mike and Will linebackers will “combo” the tight end and running back with the Y-off the ball. This means they are responsible for them in coverage. If the strong safety gets an inside breaking route from No. 2, he will transfer his eyes to No. 1 and drive on any In breaking cuts or double a vertical. “Vice” on No. 1 is played away from the passing strength. This puts the free safety as the aggressor on No. 1. He will be extra in the run fit. He will drive inside routes by No. 1 and help double a vertical. (Diagram 10)

Cover 3 is used as a changeup to defend the spread. This gives the opportunity to “gap out” the linebackers and a secondary player in the run fit. Gap out means that each player in the run fit has one gap. Therefore, the Mike and Will backers will have the open (A or B gap) to their side. The only thing that takes them across the center is a pull or a Y-off going back across the formation. The negatives of playing cover 3 are 4 verticals and not having an extra hat in the quarterback run game. A possible adjustment to 4 verticals is playing carry technique with the Nickel and the Will. They will carry the No. 2 receiver throughout the snap. A one high safety structure is most valuable against teams who do not have an elite athlete at quarterback. (Diagram 11)

These are some of the base concepts used to defend spread offenses. The variety of spread offenses (athletic quarterback, pocket passer, 10p, 11p, 2 back, 1 back) force coaches to create adjustments to help sustain success. Having defined defensive principles help coaches and players defend a variety of offenses with more consistency.