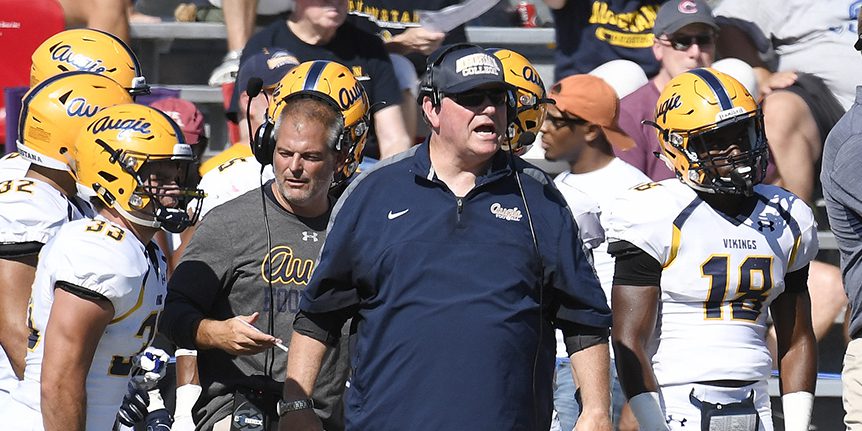 Upon arriving as the Defensive Coordinator at RPI in 2013, I learned that we played two double slot option teams.  Having no previous experiences vs this specific offense, I began to research them.  I first put on my old offensive coordinator hat and broke down the components of their run game, blocking schemes, adjustments and formation change-ups.  It became apparent that this offense wanted to establish the fullback run game by giving him the ball on mid-line, dive and veer options.  The quarterback running (keep) on veer, dive and QB Follow was another extremely important ingredients to their success. I had to develop a system to control the fullback & QB run games.

I had coached and defended both the Wish-Bone and Houston Veer Option offenses in the 1970/80’s, so I looked for similarities.  It became apparent to have/assign a defender for each gap and then the other defenders run like crazy to the football.  The more defenders we could align and assign close to the line of scrimmage appeared to increase our ability to stop the inside run, working A gap and Out.

I explored other specific gap run game offenses, especially the Wing-T.  I recalled that Wing-T teams’ defended other Wing-T offenses by employing an 8-man front.  Additionally, in 1950/1960’s the Maryland Wide Tackle Six defense was a huge run-game controller. My conclusion was to defend the option games from the inside out vs base formations using an 8-man front, where the inside 8 defenders had a specific gap responsibility dictated by formation, defensive call or blocking scheme read.

Alignment and Responsibilities vs a Balanced Formation:

All eight front defenders must play from inside to outside, bounce everything.

Nose Guard/Defensive Tackle: (NG/DT) types are responsible for ‘A’ gaps, N/T head aligns on the guards inside ear, credit card depth off the football.  The N/T must never allow the guard an inside release on a LB.  NB/T attacks the OG’s near shoulder pad and play off the quick cut-block as they pursue down the LOS.  I found by aligning two BIG GUYS in ‘A’ gaps, it immediately controlled/ended the offense Midline Option, FB Trap & QB Follow just by employing ‘A’ gap alignments.

Defensive End/End: Align credit card depth, their INSIDE EYE to OT’s OUTSIDE EYE-tight, tight ‘5’ alignment. Attack shoulder/neck area of OT with your hands and invite your feet.

Versus a Veer Block: force OT inside to the original alignment of football- (he cannot block LB your side). DE now has ‘B’ gap responsibility vs Veer Block, which generally means FULLBACK. DE must keep shoulders square get to the depth of the OT’s knees original alignment/depth. Tackle everything/one that runs through YOUR ‘B’ gap.

Versus a Straight-on/Base Block by Offensive Tackle:  DE now has ‘C’ gap and plays QB.  DE cannot get driven OFF the LOS or WIDE, as either will create an open highway for QB to turn and keep for a possible big play.

Outside Linebacker/Strong Safety Types: Align on LOS slightly wider than the SLOT- generally arm’s distance, understanding OSLB cannot get hooked on toss sweep action by SLOT. Read SLOT’s release angle to outside creek of OT. Should SLOT release straight ahead or inside take 1 step each foot and work to get hands on SLOT (if possible – (occurs about 25%) and eyes look through the original alignment of OT’s near creek-becomes MESH POINT occurs here. His reads is the MESH, but QB’s hands: no ball, has ball. NEVER READ MESH- READ QB’s HANDS after MESH POINT.  OSLB has ‘D’ gap – feather-technique on QB vs option to PITCH- Must know – are you defending boundary or wide side will depend how much distance/time you have to slow play QB.  Always keep your shoulder’s square and look QB in his eyes as QB ‘reads’ YOU. Your eyes depart QB, he will ‘depart’ you-turn up field on keep.

Play Action Pass:  the fake is away from OSLB – CONTAIN RUSH- Fullback waggle. Action TO- drop and cover man to man on SLOT your Side (may have gone in motion away), No SLOT, drop to 5/6 yards depth & width – late crosser.

Inside Linebackers: Best two run stoppers. Align with heels at 3 yards. Check the width of GD/OT spilt – ‘is split/hole large enough to run through.’ Align ISLB OUTSIDE FOOT on OT’s INSIDE FOOT.

Read Offensive Tackle’s Block Versus Veer Block: Immediately STEP UP and then OUT to ‘C’ gap. Dip OUTSIDE Shoulder to protect and rip-through SLOT’s Cut Block. You must get to the depth of the OT’s head’s in his stance. ISLB has ‘C’ gap and QB- ISLB’s eyes locate QB’s empty hands or football in hands. DO NOT LOOK to READ MESH- READ QB’s HANDS after MESH POINT. Play from inside out.

If Offensive Tackle Blocks Straight On Defensive End: Remember the OG/OT split check? If the hole was large enough to run through cleanly- RUN THROUGH NOW, tight to GD, Dip & Rip if necessary. ISLB has ‘B’ gap- Tackle anything that enters your gap, (offenses started to adjust so we could not disrupt gives, mesh points or QB follow behind the LOS). Small split, ISLB attacks the Near leg of OT, the OG coming straight out to block YOU. Keep OUTSIDE Leverage.  Remember your N/Z is alone in A gap, so ISLB can play wider.

FLOW AWAY: pursue to direction of play, eyes up hands down to defeat Cut block from OC, OT. Push helmet down and fire back leg that is being attacked. Regain, do not retreat to continue pursuing.

We also employ calls that predetermine responsibilities for DE, OSLB and/or ISLB and put a defender into a Run Blitz mindset.

SAFETY:  Align 10 yards from LOS between the Goalpost uprights. This will keep SAFETY in center field, adjusting his alignment only slightly to the boundary when the ball is on the hash. Great help for PAP and counter option.

Safety’s read and technique is to move laterally on a 10 yard plane in the direction of the offense’s action.  Once the ball has advanced to C gap run an arch to become:

Be aware of crack back block from the wide receiver. This creates a natural exchange of responsibilities with the CORNER, Also, the FSOT may outside release and travel upfield to cut block SAFETY as SAFETY moves to a contain responsibility, especially to the short side of the field.

CORNERS (BC – boundary, FC – field): Employ Man to Man Coverage on SE their side. Align 5-yards off with slight Inside Leverage. Read/react to SE’s release.

Should SE release inside (impend slightly) while working to an outside-in alignment (after WR passes Slant Route phase), and continue on CRACK Block route on FS, yell ‘crack’ out and switch responsibilities with Safety, which we term ‘natural exchange.’

2 – Is unbalanced adding an LOS blocker?

GENERAL PRINCIPLES: The Dirty Dozen of Defense vs Slot Option:

Dick Maloney comes to Augustana after five seasons as an assistant coach at Rensselaer Polytechnic Institute in Troy, New York. He served as the Engineers’ Defensive Coordinator as well as the team’s Recruiting Coordinator and was a part of Liberty League championship teams in 2015 and 2017.