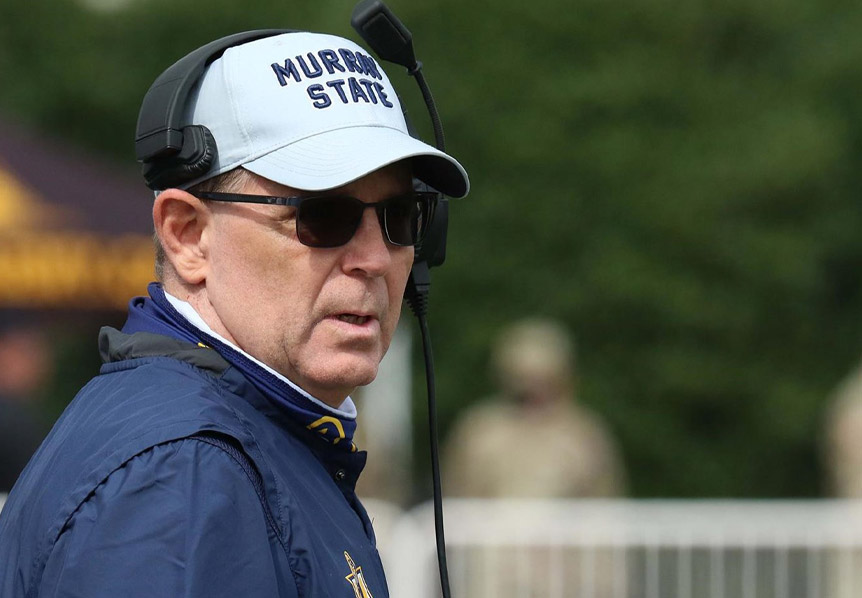 Murray State head coach Dean Hood is one of a kind. Fresh off of a spring season where the Racers posted a 5-2 record, and promptly being named 2021 Spring AFCA FCS Regional Coach of the Year, Hood seemingly fits the bill of a Division I “big-time ball coach.”

While Hood and his staff may have made it look easy in Murray State’s first winning season since 2011, his career doesn’t exactly scream overnight success. Hood started coaching in 1987. 2008 was his first opportunity as a head coach.

The two decades Hood served as position coach, assistant coach and coordinator do not demonstrate a lack of vision, leadership ability or ambition. Rather, his patient, persistent career progression tells the story of a coach who is a true believer in focusing on the task at hand, making the “big time” where he was at and, most importantly, always striving to put his players ahead of winning.

“It’s a constant battle between the scoreboard and the team picture,” Hood says. “Everybody that coaches feels that rub every single day. But you know what? I’ve never had a kid call me back after he’s been out of the program and they’re five or 10 or 15 years removed, call and say, ‘Hey coach, I just wanted to call and tell you, “Thank you so much for teaching me how to backpedal.’”

Over the course of his career, Hood has continually endeavored to use the platform of football to help young men become better husbands, fathers, neighbors and community leaders. Maybe his climb up the ladder of success was slowed significantly by that approach. Maybe it wasn’t. Rest assured, though, Hood has no regrets.

Now in his second job as head coach — his first was at Eastern Kentucky from 2008 to 2015 — Hood realizes his role involves more than just investing in his players. As the leader of the program, he holds a position affording him a unique opportunity to help develop the other coaches on his staff as well.

If anyone should know what it takes to be a great assistant coach, it’s Hood. His career includes stops at Kentucky, Wake Forest, Charlotte and Ohio, as well as several other colleges, and he has held positions coaching secondary, tight ends and outside linebackers, as well as several seasons serving as defensive or special teams coordinator.

When Hood looks back and tries to pinpoint how he was able to have the successful career he has enjoyed, he makes no hesitation in declaring how much the influence of other great coaches has contributed. All coaches, in his opinion, copy aspects of their coaching style from other coaches, and the great ones are fortunate enough to have great coaches to copy.

Stoops, Kidd and Grobe were all head coaches at a program where Hood served on staff, and all of them had similarly glowing words to describe the type of coach Hood is. When he took the job at Murray State, he felt a sense of duty to carry on their legacy and invest in the young coaches on his own staff.

“As an assistant coach, I always thought if I’m ever a head coach, I’m going to be really intentional with character development, leadership training, but I didn’t know how I was going to do it,” Hood says. “It was trial and error when I got to Eastern Kentucky, and I was the head coach. And it’s been an ongoing process.”

While Hood continues to evolve his process for developing the coaches on his staff, he recognizes one critical, but often overlooked aspect of coaching coaches — finding like- minded individuals to hire. A head coach can do everything right, but if their assistant isn’t invested in their philosophy, that assistant’s maturity and growth is severely limited. Considering this, Hood diligently seeks out the sort of coaches who have the same vision for building players into great men and working to set them up for lifelong success.

“You gravitate towards the guys that have the same common goal,” Hood explains about his hiring process. “And goal is not the right word. Every football coach has a goal to win a championship, so it’s more about gravitating towards the people that have a purpose of using football as a platform to build authentic men. Before we get on the board and start talking scheme and philosophy and all that kind of stuff, I have to know that you’re a guy that’s going to treat these players like your son, and that you’re going to model in the correct way for them. You’re going to mentor them, and you’re going to monitor them even after they’re out of the program.”

“Model, Mentor and Monitor” is the three-pronged approach Hood and his staff take to ensure they not only reach their goals of winning, but fulfill their larger purpose of setting up their players for success in life. In every interview, this philosophy holds the top spot on the checklist. Coaches who have a “win-at-all-costs” mindset need not apply.

Having three catchy, alliterated principles to help coaches remember their larger purpose sounds great. Hearing coaches talk about their approach in this manner makes for fun, punchy headlines and “Model, Mentor and Monitor” would probably look great inscribed on a plaque or painted on the walls of the weight room. What’s less fun, and a lot of consistent hard work, is putting those three words into action.

The first step in the Murray State coaching approach centers on what Hood describes as being “a sermon in shoes.” Hood wants the actions of his entire staff — starting with himself — to make a far greater impact on their players than any motivational speech, coaching cue, core values chat or devotional ever could.

In today’s society, many are quick to promote the exact opposite environment. Especially when it comes to football, the general consensus holds that a player’s value is determined by their performance. Performance-based acceptance means if you make the winning catch, you kick the clutch field goal or you execute the must-have tackle, then you will be accepted.

That’s a great approach for the business of football, but it is an awful approach for leveraging the game to show players how to conduct themselves in their day-to-day lives.

“We want to flip that environment, that culture for our kids,” Hood explains. “We want to elicit an acceptance-based performance. We want them to realize that we accept them, just like we do our sons and our families, and we love them. And we’re trying to help them be, not only the best football player and best student they can be, but we’re also trying to help them be the best man that they can be.

“When kids realize that, that you’re real, and you’re trying to help them be the best men they can be, then they want to perform. They’re free to perform. They don’t feel the prison of, ‘I’ve got to perform to be accepted.’”

When Hood says, “just like we do our sons and families,” he means it. “Family” isn’t a buzzword at Murray State. Beyond simply talking about the importance of family with players, the Racer coaching staff puts words into action. Hood encourages coaches to let their players see them interact with their families, bring their wives and children around as much as possible and model what a loving family could and should look like.

In simple terms, mentoring boils down to advising those who are young and inexperienced based on experience. Players have a lot of questions about a wide variety of challenges, and most coaches do a fantastic job of having an answer or finding an answer to guide them on their journey and avoid learning lessons the hard way. As far as Hood is concerned, the ability of coaches to have those conversations isn’t an issue. The challenging aspect of mentoring consists of putting in the time and effort to build trust with the players, so they know who to approach when they need wise counsel. In Racers terms, Mentoring boils down to quality time as a product of quantity of time.

“Distance increases error in any sport, and it’s the same thing with mentoring,” Hood says. “You have to take time to spend with your players in order to mentor. Quality time is a straight line, and there’s no such thing as creating quality time.

“You can’t be away from your kids, and then all of a sudden, take a little vacation for two hours, and have quality time. Quality time shows up in quantity of time. You have to just be around your kids.”

Hood gives the example of a father out in the yard, throwing the ball around with their son. It may catch dad off guard when a tough life question pops up during this interaction, but the question doesn’t happen just because they decided to “have a catch.” The child feels comfortable asking tough questions when they see dad there for them time and time again. The quality, meaningful conversations may seem random, but they are a product of consistent investment and interest in their child’s life.

Within the football program, this may feel much easier said than done, especially when some programs have hundreds of players, and a staff of less than a few dozen. Hood acknowledges the constant challenge and encourages coaches to be intentional with trying to get close to players and create opportunities for more quantity of time that will — hopefully — lead to quality time.

Among other methods, Murray State coaches use player questionnaires to create more opportunities for interaction between players and coaches. Players answer questions about everything from their upbringing to their favorite music or restaurants, and coaches follow up to get to know them better.

“Our coaches go to their apartment or to their dorm room and just go over it, so that they’re not just jersey number 25 out there running around on the practice field,” Hood says. “Rather, jersey 25 becomes a kid that you find out about his upbringing and his hopes and dreams and fears and likes and dislikes.”

The final step in the Murray State approach warrants far more frequent discussion. Those who are a part of the football fraternity know the game forms lifelong bonds. Coach Hood aims to ensure his staff takes these bonds as a solemn charge and intentionally pursues maintaining those relationships long after a player has played their last snap.

The influence a coach has on a player rarely rises to a higher level than when they are currently on the roster — this is just the fleeting nature of our great game. Sadly, without an intentional effort to continue to influence players after they leave the program, many coaches let the incredible influence they have drop to nothing, and they miss out on a massive opportunity to continue to fulfill their big-picture purpose as coaches. For Hood and his staff, this is simply not an option.

Not every coach will be able to look back towards the end of their career and reflect on even half of the incredible coaching experiences of someone like Dean Hood. He has walked his own unique path. Where he shouldn’t be unique, however, is in his undying commitment to his players. So, send that text. Make that phone call. Visit for the weekend or meet up for lunch when you’re in town for recruiting. The purpose doesn’t stop when the player leaves the program.

This article was written by Adam Reed, Editor, AFCA Magazine and AFCA Insider.