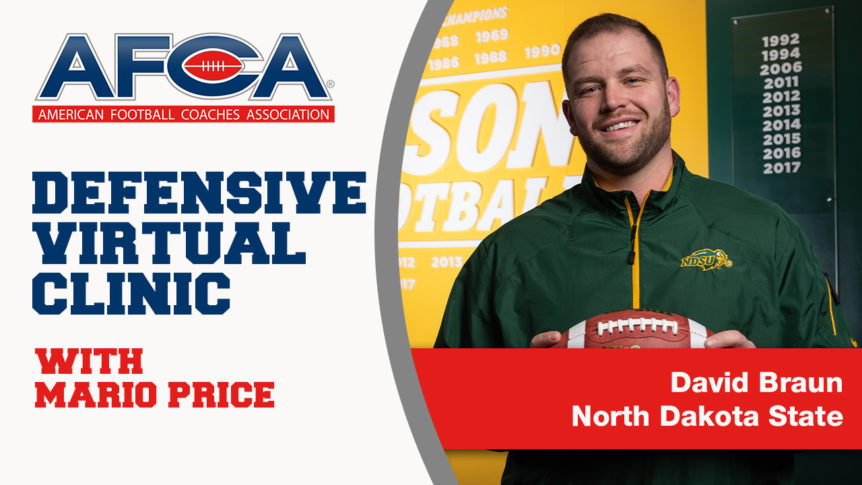 In this AFCA Virtual Clinic, David Braun, the Defensive Coordinator at North Dakota State University, shares his method for creating ball disruption. At NDSU, the defensive staff emphasizes and celebrates the importance of ‘The Process.’ The process consists of grading every practice with great detail and charting interceptions, forced fumbles, fumble recoveries, pass break-ups, strip attempts, and scoop attempts. Getting the football back to the offense is top priority for the Bison. With a goal of three takeaways per game, Coach Braun values the importance of practicing creating turnovers. Each day in practice the expectation is for players to get into a tap, or thud position, and get hands on the football. It may not always create a turnover, but it creates a habit of working the football.

It is worth mentioning that Coach Braun said uncontested fumbles should be scooped up with two hands and returned for a touchdown. A contested fumble, on the other hand, should be fallen on and covered up.

Creating a disruption on defense causes so much distress for offenses. One way to create ball disruption is by stripping it from the ball carrier. After securing the tackle, the defender should rip the ball out. Simply put, forcing fumbles kills offensive drives and punishes teams.

Another approach to creating ball disruption is by doing something Coach Braun calls the mirror hand technique. This is a drill that can be used with anyone who has the ability to rush the quarterback, whether that a defensive lineman, linebacker or defensive back. Essentially, you work the get-off, pass rush, and when the quarterbacks’ top hand comes off the football to throw, the pursuing defender should mirror the throwing hand in the air. It is important to note that the defender should keep balanced centrally and stay on the ground, so that if the quarterback pulls the ball down, a tackle can still be made.

This method to creating ball disruption also creates pass break-ups. There will be two players, an offensive player starting with the ball in the outside arm, and a defender. Once the drill begins, the defender will chase the receiver and as the hands go up with the ball (simulating a catch), the defender will chase the hip, hook the hips with the closest arm, and punch through the hands.

For Coach Braun, and really any defensive coach, it is crucial to disrupt the rhythm of the quarterback. One way to do this includes mirroring the hand. Often times this causes inaccurate throws which lead to incomplete passes or interceptions. Another way to disrupt quarterbacks is by legally hitting them. As Coach Braun said, since quarterbacks are so protected by penalty flags it is crucial to hit them below the chest and above the knees. This stays away from the head and neck area, as well as the knees, which is less likely to draw a penalty flag. Consistent hits will likely create a sense of timidness and caution in the backfield, thus disrupting the flow.

Charging the mesh is another sound way to disrupt the quarterback. By sprinting at the mesh on an RPO, the quarterback will have to make a decision much quicker. If he hands the ball off, then a tackle can be made in the backfield. If he throws, the throw could be errant because of the quick pressure. Disguising coverages is another great way to confuse and disrupt the quarterback. Often times they will make pre-snap reads and determine who the intended target will be before the ball is snapped. If defenses do a good job of disguising though, then the quarterback is forced to second guess his pre-snap read and will have to take the time to make a post-snap read. Again, this often leads to inaccurate throws or interceptions.

Q: How often do you work your turnover drills?

Q: With NDSU’s offensive style, how are you able to work a lot of what you will see over the course of the season?

A: By working together and really cooperating between myself and Tyler [Roehl], the offensive coordinator in terms of things they need to see on the offensive side of the ball and things we need to see. He’ll incorporate things that aren’t in our base offense to help us out and give us good looks.

Q: What is your team turnover goal per game?

A: Our goal is to be +3 per game and the offense has a goal to have zero per game, so as a defense we want three turnovers per game.

A: We won’t specifically create a drill for it, but we will emphasize it in position drills and when the guys do get scoops in practice. I think it will help special teams as well.

Q: What is your base defensive coverage?

Q: You talk about changing up the defensive-end tempo versus RPO, not always squeezing down but attacking the mesh, is that a call or does your DE have the freedom to mix it up?

A: Sometimes we’ll have a game plan, but we can make adjustments, as well and speed things up.

Q: With the historic success at NDSU, how do you add your own identity to the defense? How do you make it David Braun’s defense?

A: It’s not my defense. I did a lot more listening than speaking when I first got here. This allowed for more consistency. As a coaching staff, decisions will be made collectively and if it helps put our players in a better position then we’ll get it on the field. We’re not going to change the foundation, but we will keep evolving and getting better.

To watch Coach Braun’s Virtual Clinic, along with numerous other videos, please log in to your AFCA membership account and search through the AFCA Educational Library.