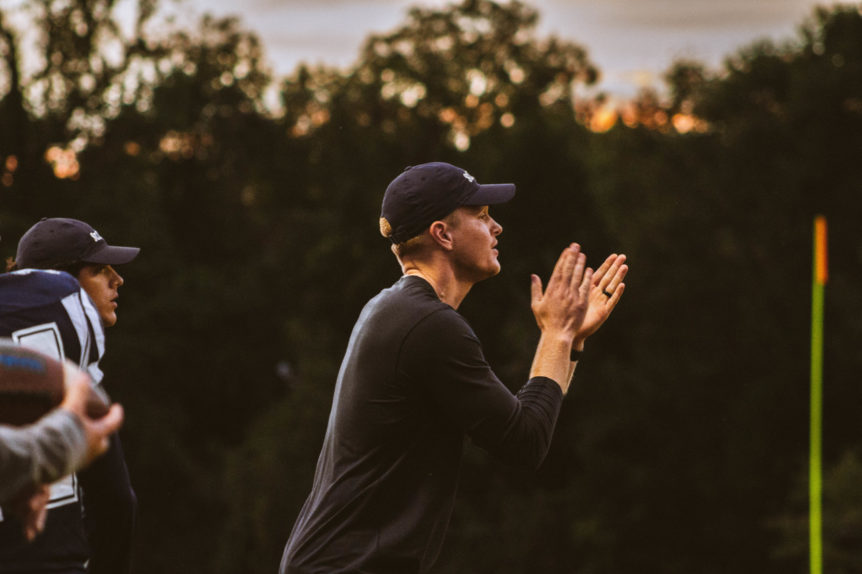 Dan Casey is the Head Football Coach at St. David’s School in Raleigh, North Carolina. Coach Casey provided fellow coaches with insights about how times are changing within the sport of football during a breakout session at the 2020 AFCA Convention in Nashville, Tennessee. He also highlighted the importance of updating processes and routines that contribute to success.

Often times, football coaches have preconceived notions about what the physique of certain position players should look like. Obviously, the linemen working in the trenches should naturally be bigger and stronger but what about the other position players?

RELATED ARTICLE: Dave Clawson’s Philosophy On How You Should Be Developing A Sustainable Program

Casey referenced Bob Dylan’s iconic song The Times They Are A-Changin’ before describing how the NFL physique and build has changed over time. He pointed out the difference in physical build between the 2002 NFL tackle leaders Zach Thomas and Brian Urlacher and the 2018 NFL tackle leaders Darius Leonard and Blake Martinez, citing that Darius Leonard looks like a safety based on the rigid perception, which most coaches share, that size determines position.

“The reason the guys look completely different is because the game looks completely different,” said Casey. “We always talk about being bigger, faster, and stronger but if you compare these pictures and if you compare the way the game is going, the only reality in that phrase is faster. The guys aren’t any bigger and the guys aren’t any stronger these days.”

Coach Casey shared his desire to transition away from arbitrary height and weight descriptions defining certain positions. Instead, speed development and playmaking ability should define a player’s position.

“If you change your perspective from size and strength and shift your thinking to speed you are making space for a lot of different players to be on your team and make contributions.”

When describing how the game is played differently today, Coach Casey pointed out that teams want to capitalize on the speed advantage by getting horizontal in the run game and vertical in the pass game. He also shared with the audience that speed is the most valuable commodity in the game.

Each week during the football season Coach Casey, along with his staff, creates a game plan to win, and part of that game plan is answering the question of whether or not his team has the speed advantage that week.

Coaches often view speed as an important aspect of the game, but not to the point of building their entire program around it. This is where Casey has a unique vision.

“The greatest skill on the football field is speed,” said Casey. “Speed is a skill, and nobody wants to admit that. Everybody thinks it’s God-given, but speed is a skill that you can develop with work if you’re committed to human performance as the building block for every single thing you are doing in your football program.”

There will always be different building blocks and fundamental absolutes that should never change for any program. However, there are things that should change over time, and when discussing this, Casey brought up the creation of the universal shelf system. He paralleled the concept that a few mounted and unchanging studs could support and sustain a system of numerous layouts and changes over time. He posed that if football programs follow this idea, they will be able to support and sustain change over time.

“The brilliance of this system is that it allows for you to make changes without disrupting the whole,” said Casey.

Most coaches face the struggle of creating workouts that accomplish the common purpose of enhancing human performance while also being enjoyable at the same time. Casey referenced a book called, Peak Performance in which the authors provide this equation: stress + rest = growth

However, Coach Casey created his own multiplier to give an even greater meaning to this equation: stress(enjoyment) + rest = fulfillment

By cutting down on the time spent working out and allowing for more rest and more enjoyment throughout the daily grind and stress that playing football demands, athletes are able to enjoy the process and receive more fulfillment from their investment into the game in return. The more an athlete experiences enjoyment, the more likely their adaptation, transformation, and buy-in will be apparent.

Throughout his coaching tenure, Coach Casey has been named the NCISAA Big 8 Coach of the Year after St. David’s appeared in the 2018 State Finals. In addition to coaching football, Coach Casey is involved in the off-season strength and speed program. Casey was also selected for the AFCA’s 35 Under 35 Coaches Leadership Institute this year.

To watch Coach Casey’s Breakout Session, along with numerous other videos, please log in to your AFCA membership account and search through the AFCA Educational Library.