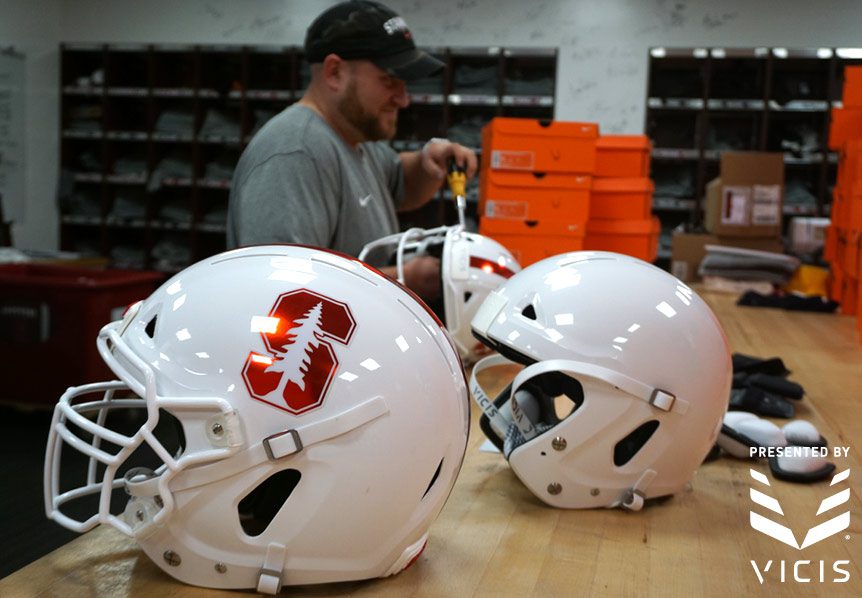 Football equipment management is a complicated business. If you’ve ever seen an equipment room at a Division I FBS football program, you’ll notice a couple things. First, there’s typically way too much equipment to fit into a given space. The past decade has seen an absolute explosion in the depth and breadth of custom equipment available to football players. In that same time, equipment rooms haven’t really grown enough to accommodate it all.

“[Custom equipment] has been something that’s been available for a while, but it’s becoming more and more prevalent and in our face, as the players and coaches want certain things,” says Greg Valenzisi, director of football equipment, Stanford University. “A helmet, shoulder pads, if you’re just buying stock like you used to do in high school, you just need sizes and you’ll figure it out. That’s great. But when you get to this level, you don’t want a linebacker that is 6’2″, 225 pounds, wearing the same shoulder pads as a quarterback with the same measurements. They need different things, different aspects of the same equipment.”

All of that custom equipment adds a certain layer of complexity, and Valenzisi and his staff must be ready to go when a shoelace breaks or a cleat fails on a given shoe. They need to know – down to the player – exactly which equipment will be required to get that player back in action, and they can’t spend a bunch of time trying to figure it out.

“I have to have a memory like an elephant,” says Valenzisi. “I have to be able to look at a kid and tell – off the top of my head – which helmet he’s wearing, his size, his chin strap, his face mask. Here’s his shoulder pads, the style, the manufacturer. Here’s what cup and girdle he’s in, whether he’s wearing a backplate, knee pads, custom shoes. Are they a light shoe, a mid or a low? I have to know everything that kid’s wearing at the drop of a hat, because if something happens at practice, if something happens in a game, and we need to replace equipment, I need to be able to react, and fast.”

The reason for moving in this direction is that coaches have found that optimized and customized equipment can provide an edge in a game where any edge matters. College football has become so competitive and there is real parity at the top levels. Sure, there are several FBS teams that stand a little taller than the rest, but for many of the 130 schools in NCAA Division I FBS Football, every single rep counts because that rep can mean the difference between a checkmark in the W column or one in the L column.

“It’s something that a lot of great equipment managers have gotten used to; that’s kind of what we use camp for,” says Valenzisi. “We get these 30 days while we’re practicing, and a lot of people think we’re just in here doing laundry. But my assistant and I are sitting here going through a list of people and custom equipment and trying to memorize what every player is wearing. So when our freshman wide receiver comes up to us and tells us he just blew out a cleat, we just take off running, knowing what he wears. If I have to get on my computer to look this up, that’s two to three minutes that he’s not getting reps and he’s not getting better.”

That level of memorization is pretty eye-opening in a world that has come to rely so heavily on all of our information being stored in databases. But Valenzisi says it just comes with the territory, and really, it helps him develop closer relationships with the players, which is a part of the job that he truly loves.

“The relationships that we build with these kids are why we do the job,” says Valenzisi. “We want them to know that they can come in the equipment room every day and they have somebody who cares for them, somebody who’s looking out for them and always has their best interests at heart. The more they trust us, the easier it is for us to take care of them.”

For all equipment managers, the custom work they put in to helping student-athletes is commensurate with the reward they take away from the game, and that level of care means a lot to the student-athletes while they’re in the program, and when they graduate.

“At Stanford University, it’s something we pride ourselves on,” says Valenzisi. “We want to take the best care of our athletes, because some of our kids are going to be NFL players, but some are going to go on and hopefully change the world in some capacity. We want to make sure that when they’re done with us, they’re in the best physical and mental position they can be.”