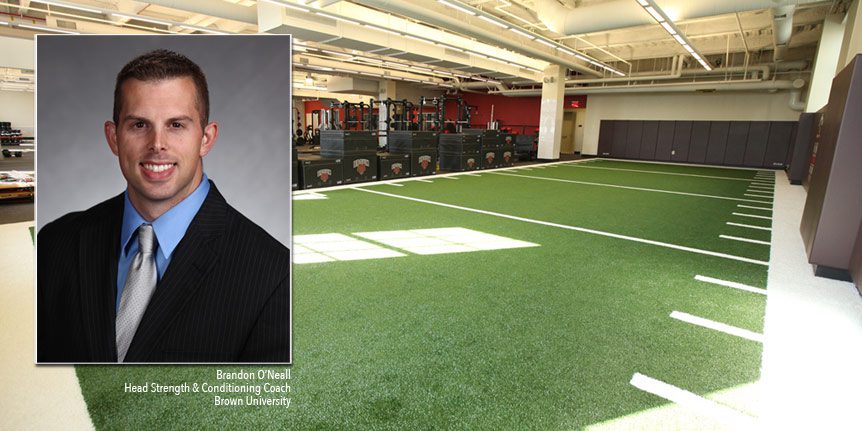 Brandon O’Neall might lead one of the most intelligent groups of football players in the nation, but it doesn’t necessarily mean they can call themselves “elite.” Sure, they attend Brown University, an Ivy League institution known for graduating some of the best medical and legal minds in the country, but Brown isn’t well known for it’s football prowess.

O’Neall, who is head strength and conditioning coach for Brown, is on a mission to change all that.

“We are trying to create a culture of being elite,” O’Neall says. “Let’s be the elite 2 percent of society. The reason they’re the top 2 percent is because they do things differently. They hold themselves to high standards, they do the stuff that other people just don’t want to do. That’s why there’s a lot of average people in the world, because they don’t want to do what the top 2 percent, the elite do.”

To create a “culture of elite,” O’Neall started by analyzing why elite people act the way they do. He soon realized that individuals who make up the top 2 percent themselves begin by forming what he calls elite habits. Logically then, he found elite habits result from elite actions done consistently over time.

But how do elite actions arise?

What’s interesting is the old axiom about leading a horse to water remains true. If a player’s outlook isn’t correct, forcing him to take correct actions will never lead to good habits. Players who are forced to change inevitably revert to their old ways unless they change their attitudes first. Thus, O’Neall focuses on player attitudes by teaching them how to carry themselves with confidence and class, while maintaining a positive outlook.

O’Neall asks his players, “How do people perceive us? Are we making eye contact, are we shaking their hands? Are we attentive, do we have an upright posture, or are we hunched over and looking like we’re tired or don’t want to do this?” Coaches can save themselves time and trouble if they prioritize player attitudes. After a player has a winning attitude, actions and habits naturally fall into place. In one instance, O’Neall helped athletes change their attitudes by starting summer workouts at 5:45 am instead of 6:00 am. It’s only 15 minutes, but answering the bell that early can cause problems with younger players.

Establishing this elite mentality can be the most daunting step in the process of cultural evolution, but once student-athletes have bought in, the culture of elite can flourish.