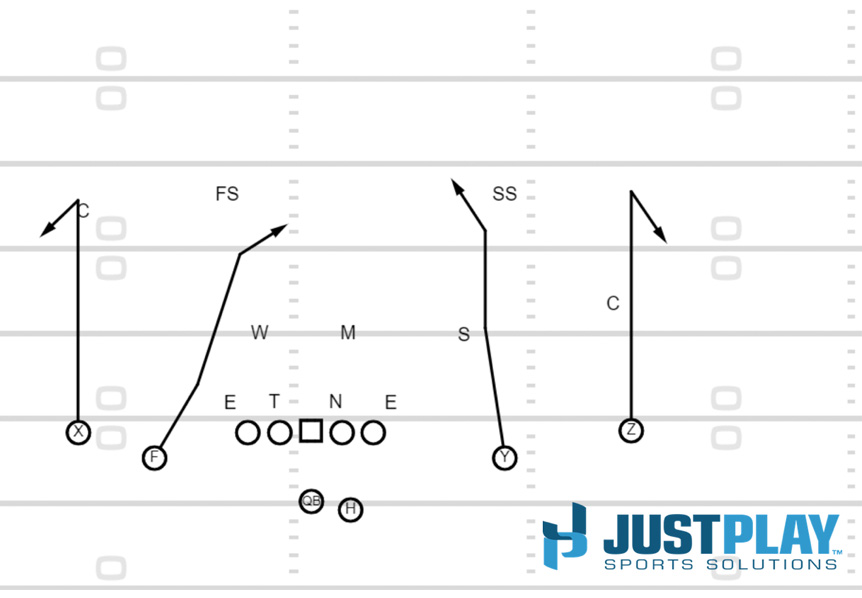 Since 2017, Ohio University has used 12 Personnel (one running back, two tight ends and two wide receivers) on 31 percent of total snaps, yielding 6.5 yards per play and 14.3 yards per completion in these two tight end sets.

As the current tight ends coach and former offensive graduate assistant for head coach Frank Solich and offensive coordinator Tim Albin, it’s my task to prepare our tight ends to be reliable, disciplined and dominant playmakers. We rely heavily upon our tight ends in both the run and pass — flexing, adjusting and motioning our tight ends to create and maintain a decided schematic advantage on every play.

The NFL’s conventional wisdom on elite tight end play has helped inform our philosophy as we recruit and feature tight ends that fit a prototype of height, weight, speed and strength.

Specifically, our tight ends must have the length and athleticism to be dominant as either a blocker or receiver — winning matchups in space with quickness, strength and excellent receiving ability. Additionally our tight ends must create mismatches on the field in our favor as defenses are forced to decide on each play how to best align to our personnel and formation.

The first way that we dictate mismatches is by being in 12 Personnel while aligning in — or motioning to — a traditionally 10- or 11-Personnel look with three, four or five offensive skill players flexed out from the core.

Prior to the snap, the defensive coordinator must decide if his front, blitz and coverage calls or checks should match the on-field personnel or the formation, all in relation to the down, distance and field position.

In Diagram 1, the offense has two tight ends on the field but is aligned in a traditional 2×2 detached formation. In a league in which many defenses maintain a base Nickel Personnel (4-2-5) against traditional 10 and 11 Personnel, the defensive coordinator — seeing 12 Personnel entering the field — may choose to substitute a third linebacker who is likely a weaker pass defender and less comfortable defending the space or man he is assigned against. 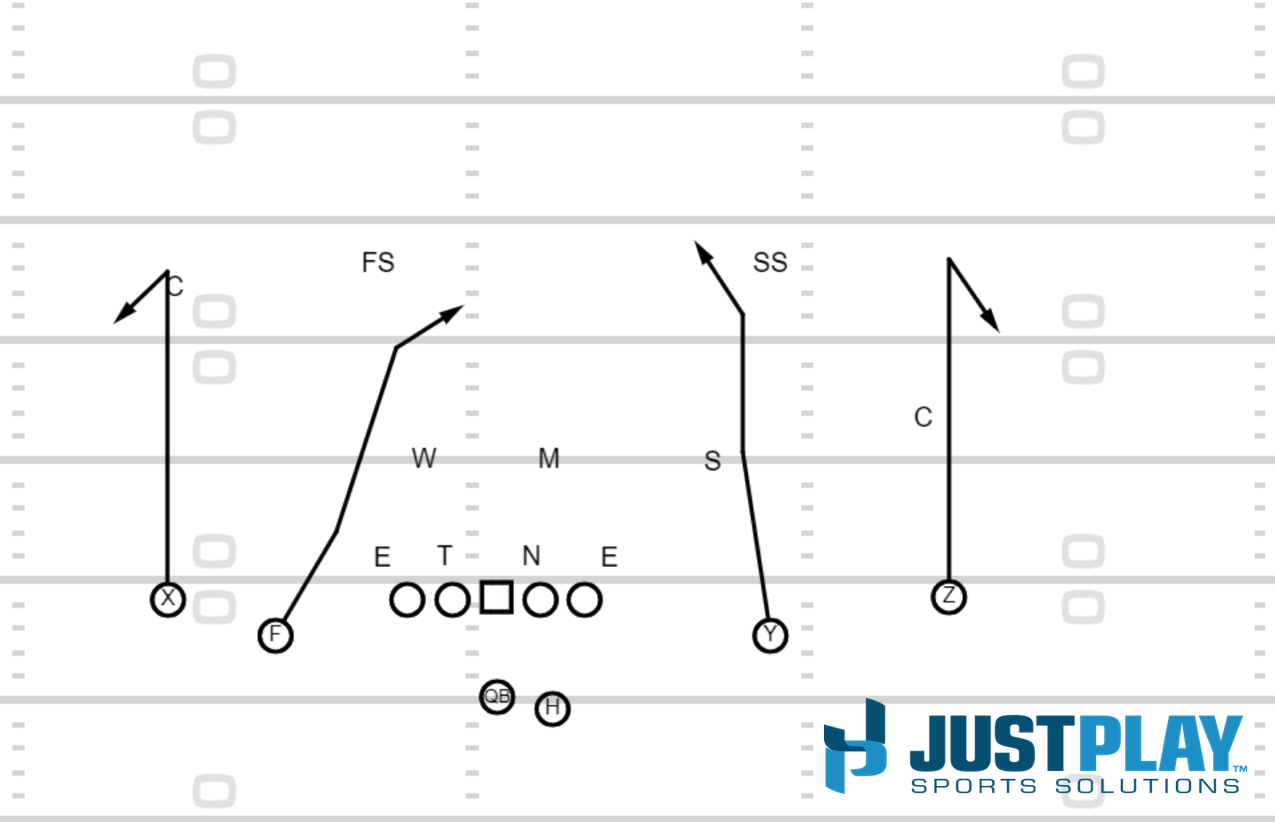 This substitution and defensive call could allow our offense to execute a Day 1 install concept such as four verticals against a defense and defensive coordinator expecting run. Of course, should the defense remain in Nickel while we’re in a two tight-end set, our bigger and stronger tight ends will be well-positioned to dig out an overhang or man-to-man defender if our offensive coordinator calls for a run concept.

In instances where the tight ends or running backs are aligned in non-traditional positions – such as the single skill player to the boundary or outside of the slot as the widest receiver to either side of the formation – the defense will need to declare man or zone coverage by choosing to cover the tight ends with the cornerback, safety or linebacker.

In Diagram 2, the offense has two tight ends on the field and has flexed its primary tight end as the single receiver to the boundary. The defense, being in man coverage and aligning with a “corners-over” principle, chooses to cover the single tight end with its boundary safety. 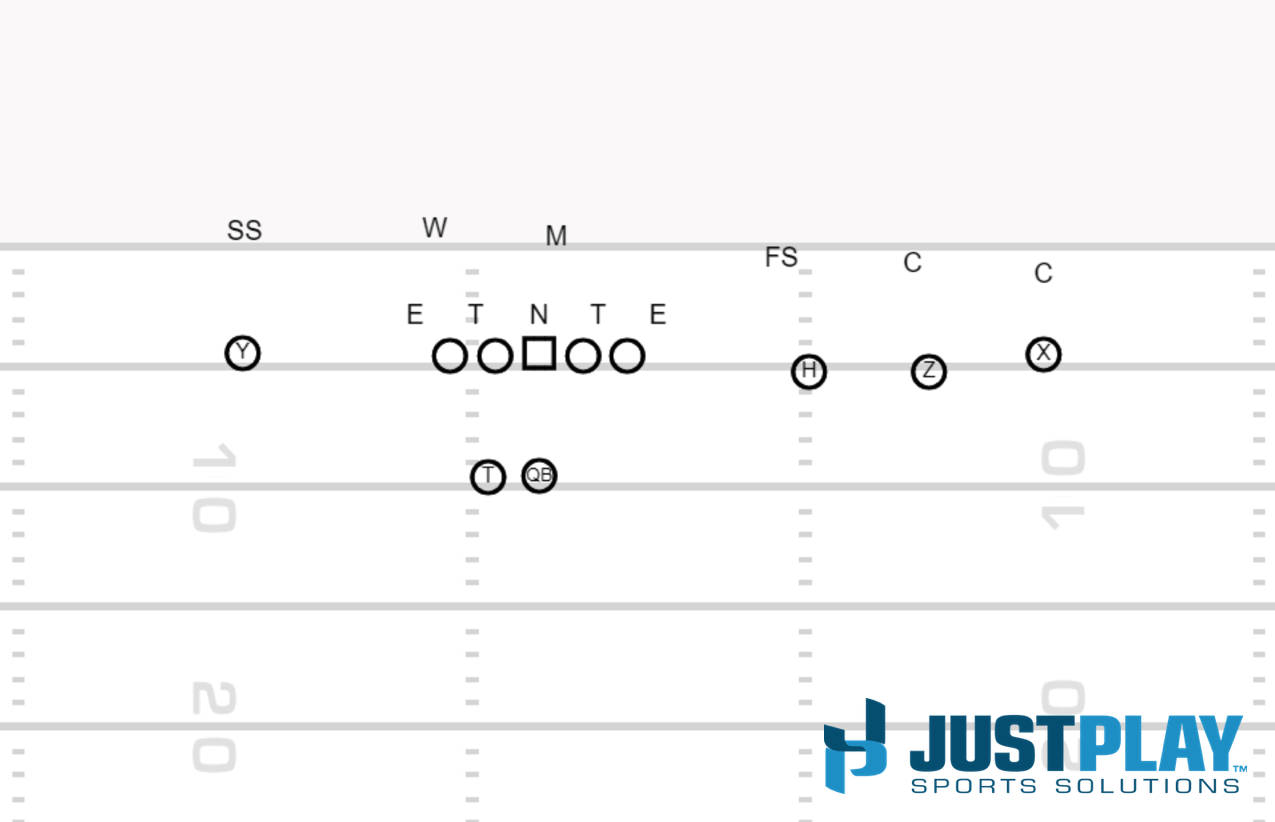 This pre-snap defensive alignment allows the quarterback to gather information to properly distribute the ball or check the play to a more advantageous concept.

It’s important to remember that the object of utilizing tight ends as “chess pieces” in this manner is to create opportunities for ball distribution in the passing game and for numbers advantages on the ground. It’s not specifically to target the tight ends through the air. In fact, the tight ends’ versatility and capacity to execute the widest variety of assignments among offensive players often develops breaks for the other four skill players and the quarterback.

Similar to the ideology of using 10 Personnel formations to create mismatches, we also have the capacity to be in 12 Personnel and align in traditional 12 Personnel looks to pass the ball downfield. This allows us to capitalize on a defense’s eagerness to stop a dominant 12 Personnel rushing attack that has gained significant yardage on the ground over the past three seasons. By marrying precise play-action protections to our most frequently executed run types, we can catch a defense by surprise with a vertical attacking passing game.

In Diagram 3, we align in a traditional 12 Personnel set and utilize a simple inside zone six-man play-action protection to take a vertical shot down the field on a double-move. Our outside receivers run stutter-and-go while our tight ends provide check downs for our quarterback at 10 yards depth past the line of scrimmage. 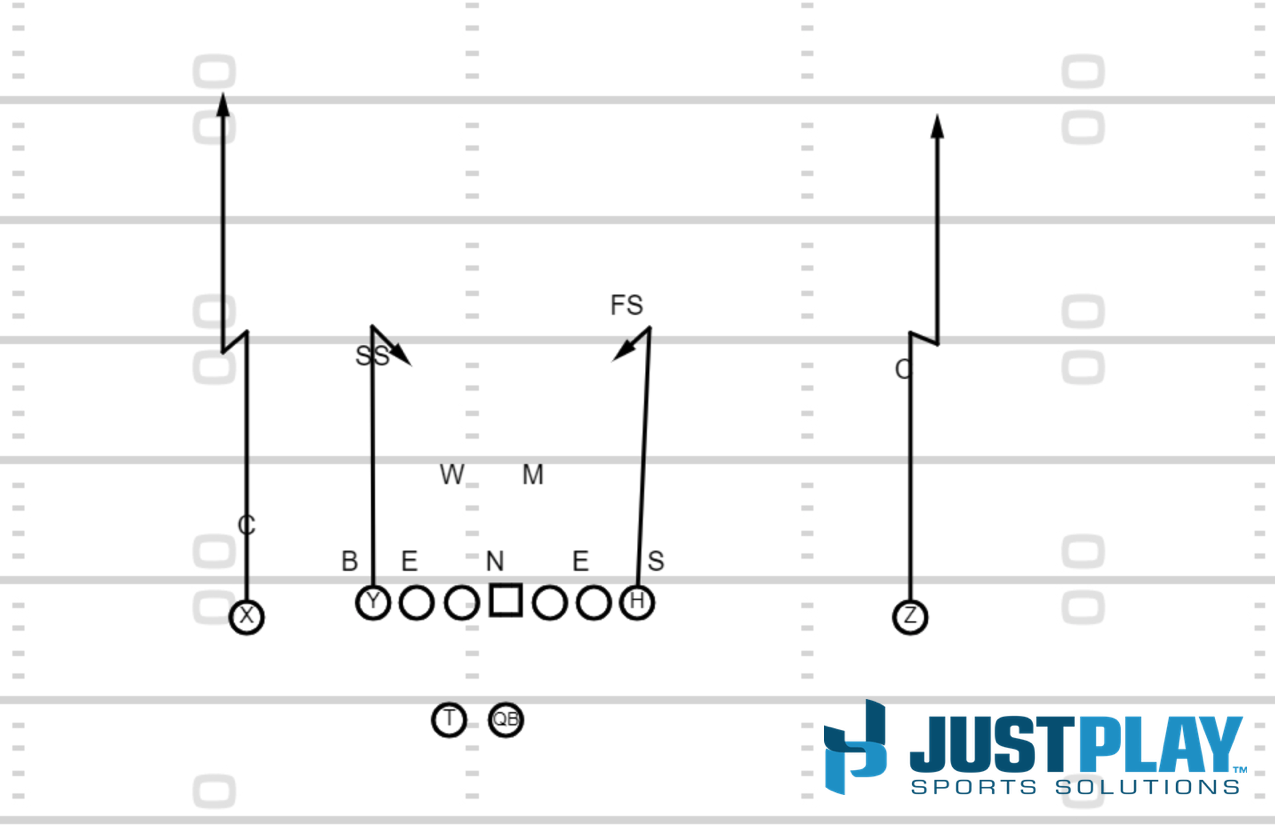 Should the defensive backs sit back and refuse to bite on the play action or double-moves, our big bodied tight ends are finding a hole in the zone coverage underneath for an easy completion for our quarterback.

Additionally, as our offense has evolved to include wide zone and other outside run schemes, we’ve looked to include naked, waggle and bootleg opportunities for our quarterback to roll away from the run action or move the pocket, protected by a pulling lineman or a tight end guarding the front-side.

These schemes allow us to get our mobile quarterback to throw on the run, creating opportunities for easy completions both underneath and downfield.

We’ve had success with bootlegs away from the run action as well as protected inside zone or speed option play actions. These play-action passes provide challenges to defenses, slowing their aggressive quarterback rush and messing with the undisciplined eyes of the defensive backs, placing doubt in the mind of every defender.

In Diagram 4, we protect a play-action pass with hard speed option protection while releasing our receivers deep down the field behind run-fitting safeties. This is a play action that mirrors one of our most frequent 12 Personnel run calls, and the passing concept is also one our receivers know well. The hard run action, which includes our tight ends protecting with “low hats,” draws the defenders down to the line of scrimmage for a substantial shot over the top. 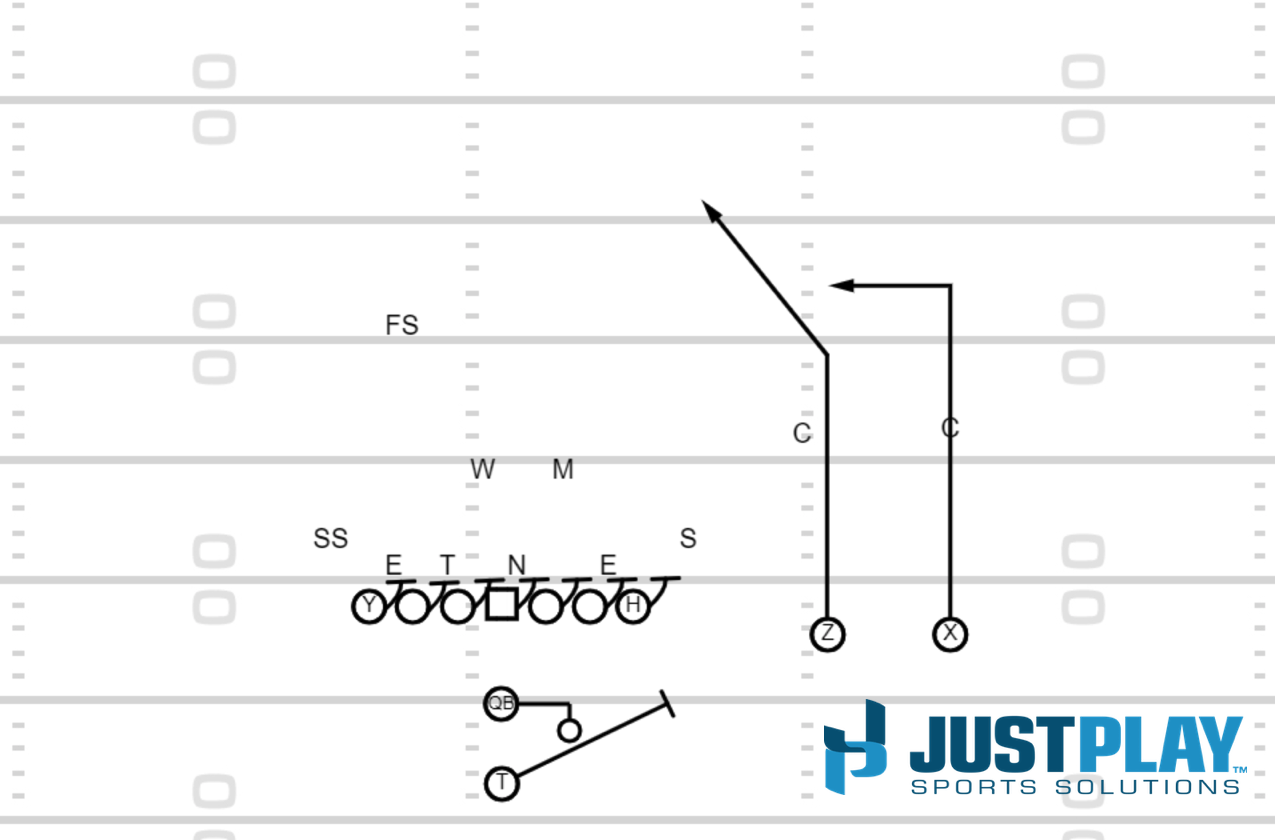 The “chess piece” variability from our tight ends has allowed our staff to successfully deploy them in 12 Personnel trick plays, gadgets and unbalanced alignments for quick strikes against unsuspecting or hyper-aggressive defenses. These offensive schemes act as the change up in our repertoire and can lead to explosive plays in critical moments.

While we have most frequently utilized our tight ends as the end men on the line of scrimmage to block in the 12 Personnel run game, we’ve also developed throwbacks and screens, reverse passes and “fight song” alignments, which flex out an athletic lineman as a covered, ineligible receiver while hiding a big-framed tight end at an uncovered tackle spot.

In Diagram 5, we align in a 12 Personnel empty set. This alone forces defensive checks and communication while increasing the potential for blown assignments. As the play develops, the defense is caught off-guard as the three-speed side of the offense’s formation is not where it previously appeared and our “hidden” tight end snakes behind the second-level defenders for an explosive gain through the air. 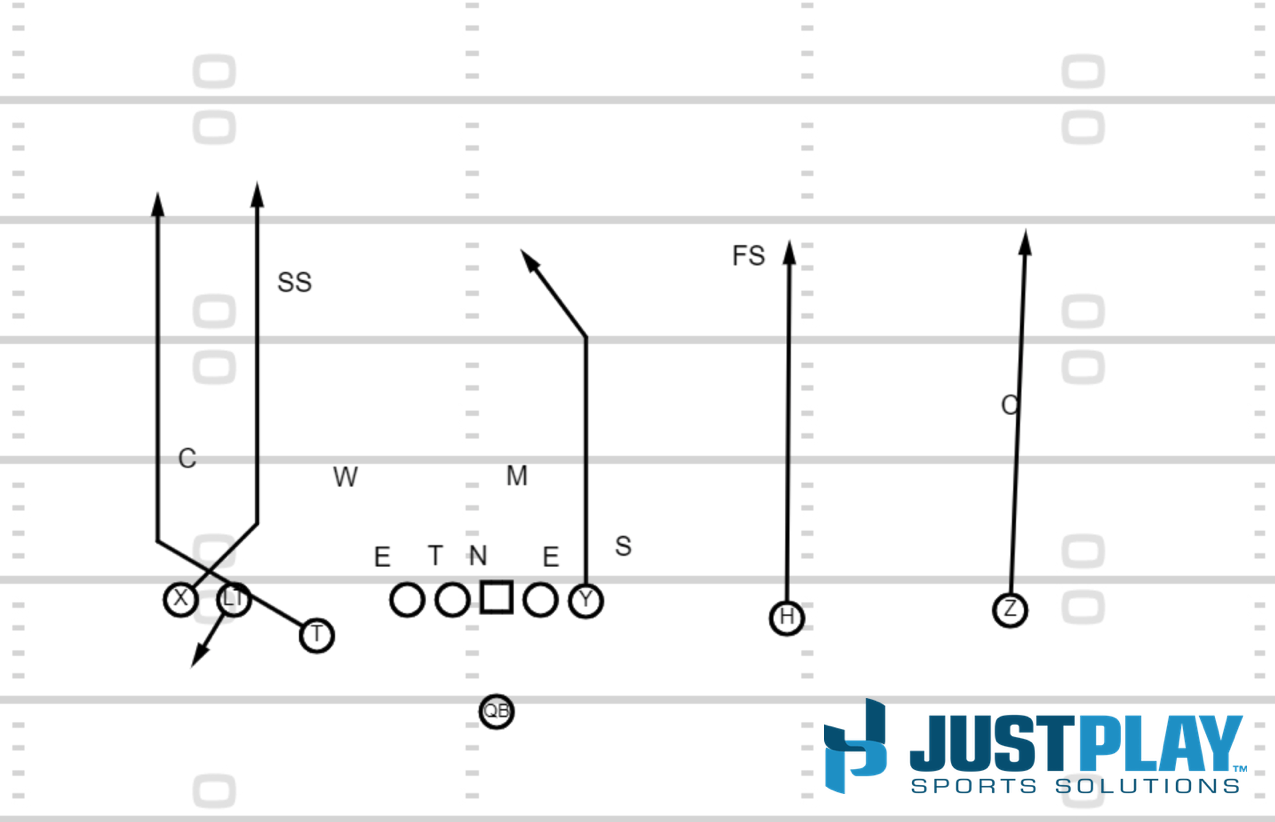 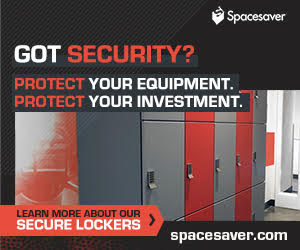