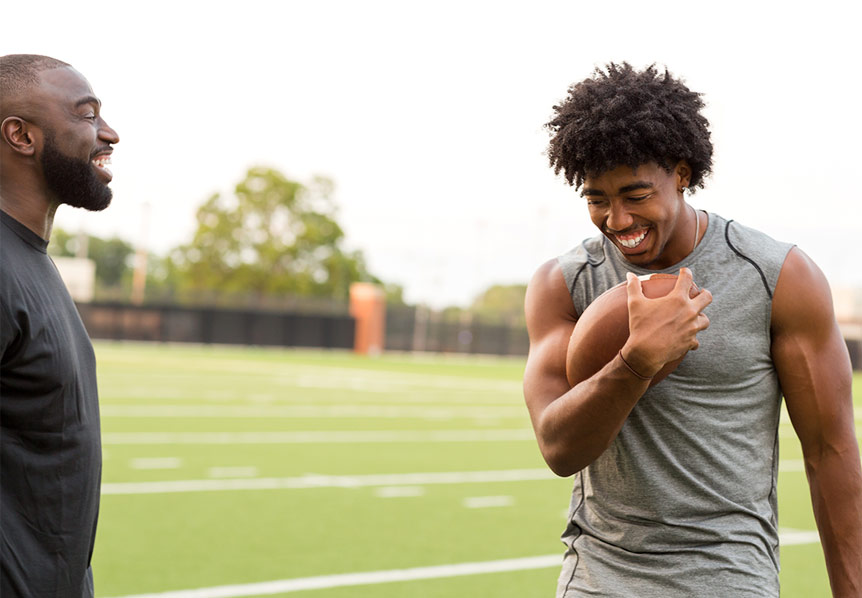 How can coaches improve the motivational climate of their teams? Nichols’ (1984) Achievement Goal Theory (AGT) provides a blueprint. AGT focused on two terms: task involvement and ego involvement. Task involvement refers to individuals seeking mastery by improvement. Ego-involved individuals interpret ability by how it compares to others.

For our purpose, ego-involved coaches would utilize the win-at-all-cost mentality, whereas the task-involved coach would display a more athlete-centered and holistic view. Let’s dispel the notion that holistic, athlete-centered coaches do not want to win. They want to win just as much as every other coach or athlete. The difference is the holistic coach’s primary focus is the development of the athlete.

Possibly the single best expression of a holistic, athlete-centered coaching philosophy, and arguably the most crucial part of the process, is developing an appropriate performance climate or culture. Many benefits, including intrinsic motivation, self-confidence, and moral sport behavior seem to be connected to a supportive climate. If coaches can cultivate the appropriate motivational climate, athletes will benefit more from sport participation. The holistic coach uses task orientation, thereby increasing intrinsic motivation, self-confidence, and self-esteem, and athletes feel competent because self-improvement is the goal rather than winning or high rankings. The question is, how can coaches create the right motivational climate?

Success in coaching should not be defined by whether one wins or loses. It should be evaluated on self-improvement. Self-improvement, mastery and competence, all tenets of task orientation, motivate athletes for the long term and increase confidence. Self-referenced improvement also allows the athlete to feel a sense of autonomy; they have control over their development.

Smoll and colleagues (1993) examined youth athletes’ self-esteem using a social support training intervention for youth sport coaches. The training intervention aimed to teach coaches to redefine success to maximum effort (holistic approach), use positive approaches, and increase relationships within the team. They found that players rated trained coaches as better teachers, had more fun playing the sport, and were attracted to the relationships on the team.

Outcome goals, or goals associated with winning, are valid and should be in your program. However, conquest coaches only value outcome goals. Winning and losing is a function of many factors: your performance, your opponents’ performance, luck, etc. Performing well and not winning a game or contest should not be deemed a failure. Therefore, the focus should remain on goals that you can control. Performance and process goals are the focus of holistic coaches.

Holistic coaches will allow athletes to have some decision-making responsibilities. Self-Determination Theory (SDT) was developed by Ryan and colleagues (1997) and examined self-regulation and autonomy as a piece of intrinsic motivation. They developed three psychological needs: relatedness, competency, and (relative to this section, most important) autonomy.

Autonomy can be simply described as an individual having some ownership over their course of action. Ryan and Deci (2000) state that this ownership or autonomy enhances intrinsic motivation. Enter the democratic process. The ownership element can be manifested in numerous ways. For example, athletes may have a say in the rules and consequences of a program. Athletes might choose the uniform for a given game or lead warm ups. Using a democratic process gives the athlete autonomy, teaches responsibility, and reinforces accountability. Mallett (2005) concurred, concluding a paper on enhancing quality coaching by stating coaches should create an autonomy-supportive environment because of the resulting increased sport performance.

Coaches are teachers. This means that coaches must provide appropriate feedback in order for athletes to grow to their potential.

Utilize a positive approach with your athletes. All too often, coaches only recognize athletes when they make a mistake. A positive coach makes an effort to reinforce the good things athletes do and by default, encourage athletes. An example is, “James, excellent throw. This time, open your hips to have more velocity on the throw. Keep up the great work!” In this example, not only is the coach correcting points of performance, but also reinforcing the great effort being shown by the athlete. Negative coaches affect motivation, confidence and performance. Positive coaches not only increase these, but athletes like playing for positive coaches.

The feedback holistic coaches provide is high in information. They do not ignore mistakes and they sparingly give only general praise such as “good job” or “nice.” Great teachers give informational feedback such as, “Way to shuffle your feet, Da’Quan,” or “Alex, excellent job keeping your elbow tucked.” Smith and colleagues (2005) found that perceived encouragement and positive feedback from coaches were interpreted by athletes as creating a task-oriented culture, and Weiss and colleagues (2009) found that positive and informational feedback increased athletes’ competence, enjoyment, and intrinsic motivation. Therefore, provide informational cues to create a task-oriented environment and increase the quality of feedback.

This is an excerpt from Coach Education Essentials by Kristen Dieffenbach and Melissa Thompson.