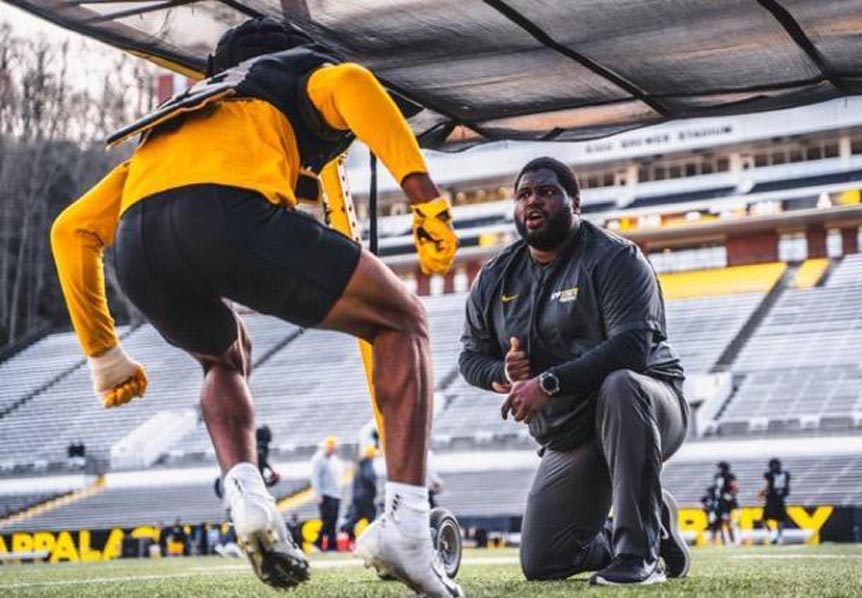 Cortney Braswell grew up in rural northwest Georgia without a father. His high school football days were critical in paving the way for the man he was to become. Those positive influences shaped him as a young man and are part of why he’s a coach today.

“I know what my high school coach and my teachers meant to me,” says Braswell, the outside linebackers coach at Appalachian State University. “I honor those who took interest in me and helped me along in my life, so I want to give something back. There is nothing else in my life that I’ve done, except for being a father, that felt as good as it does to make somebody’s life better because you were in it.”

In particular, he points to Aaron Nance, who as a young man played for Braswell early in the coach’s career, then after graduation came back to coach under him. Nance went on to get his college degree, is married and about to have his first child, and he is the offensive coordinator at nationally ranked Grayson (Ga.) High School.

“I asked him, ‘Why did you decide to coach?’ and he told me it was because of the influence I had on his life,” Braswell proudly says. “To see someone’s life go on a path where they find something they’re passionate about, and it’s because of me being in their life, there’s nothing that feels more right to a coach.”

And despite being just 33 years old, Braswell has been involved in a lot of players’ lives during his coaching career. It’s offered him a perspective that has allowed him to grow and learn each step of the way, as a coach but also as a teacher.

Consider his high school coaching career. He coached first at Ringgold (Ga.), then moved to Soddy‐Daisy (Tenn.) to East Ridge (Tenn.) to North Murray (Ga.) to Chattanooga Central (Tenn.), to Bradley Central (Tenn.), back to Chattanooga Central (as head coach) and to Ridgeland (Ga.). This all took place prior to spending a year at the University of Louisville as a quality control coach.

“I’ve been in different demographics as a coach, different socio‐economic situations. I’ve been at private, well‐established schools with wealthy people, and I’ve been at Title 1 schools where 80 percent of the school is on free or reduced‐price lunch. I’ve been everywhere,” Braswell says. “One of the best things about being at a place for a long time is one of the worst things — you don’t get new experiences. That’s really helped me differentiate my instruction as a teacher and a coach.

“We get all these kids with different learning abilities and learning styles, and you’re supposed to get to the same end goal, whether it’s in the classroom or on the football field.”

While Braswell sees the somewhat nomadic life of a coach as a positive, he says if he ever did see it as a negative, he’d quickly think of the sacrifices his mother made for him and realize just how good he has it.

“For most of my childhood, I watched my mom work a second‐shift job at a carpet mill that she absolutely hated. She always pushed me to go do what I want to do in life,” Braswell recalls. “Every place I’ve been, I’ve always taken something from it.”

He continues to push forward in his career. Now in his second season at the collegiate level, Braswell admits the hardest part of the job is building relationships as a recruiter that sometimes don’t turn into a commitment. He says he loves meeting players and their families, learning about how they can contribute much more than just on the field and finding out how to help them in their journeys.

“I wish I could coach them all. I want them to play for me, not just for the talent they have but for the people they are. That’s the hardest part for me is getting so close to them and developing a relationship, and it not working out,” Braswell says while admitting it may be the young coach in him who cares too much.

Based on his positive outlook and love of the game, it’s no surprise that while 2020 has been an incredible challenge for so many programs, coaches and players, Braswell sees football as a chance at normalcy and consistency in the midst of the swirling chaos. Even if it’s for just a couple hours a day, being at practice with peers allows players and coaches to do what they love.

He adds that the emotional, personal and physical struggles of 2020 cannot change who he is as a person.

“I’ve always believed in trust, resilience and service. Those are the core of who I am. It’s going to show up with how I coach my kids and how I carry myself as a professional,” Braswell concludes.