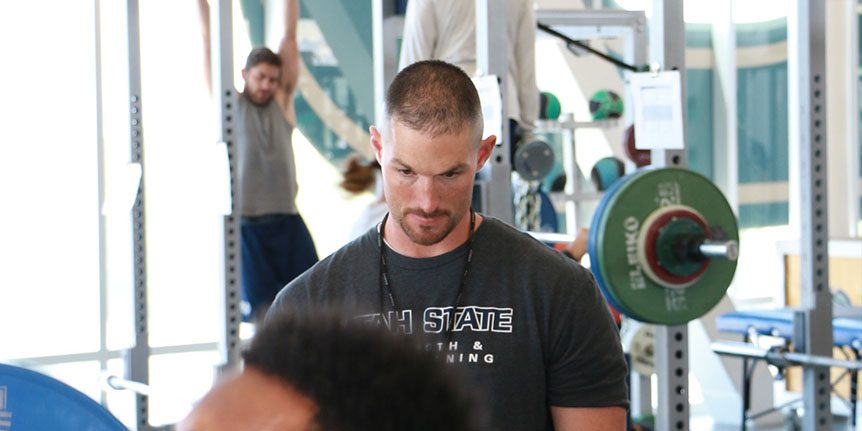 Every team has the opportunity to improve during the off-season, so what’s going to separate your program from the rest of the pack? Coaches need to generate athlete buy-in (and discipline) to maximize their team’s gains in the off-season. It’s not going to work unless they trust the process.

Very proud of the dedication and subsequent results these young men have achieved this offseason. Unbelievable commitment and buy-in to our program! @joeybergles @bhoward74

For Bryant University, Basil emphasizes building trust with athletes as a means of developing player buy-in.

“They have to trust what you’re saying. They don’t care what you know until they know how much you care … Show the kids you know what you’re talking about. There’s a ‘why’ to everything [we do]. Show that you can clearly explain it in a detailed but brief manner.”

So, what if players don’t completely buy in to a strength program? Basil takes a straightforward approach.

“You’re not in high school anymore. Everybody at this level was all-county, all-district, all-state, whatever the accolade was. Speed is forced production. The stronger you are, the more you can squat, the more force you can produce, the faster you go … Everybody likes getting stronger, they just don’t know it yet.”

When new players enter the program, they need to understand expectations, and they won’t know unless they’re taught. Scholz takes time to break down and define his philosophy on nutrition to eliminate confusion.

“The first thing I’m trying to get them to do is to cut out junk – understand what junk is and get that out – and put good stuff in … [junk food] can encompass everything from Doritos to breakfast cereal, bagels, bread, and pasta, and all of the stuff that falls in between. And when guys are sitting there saying ‘Is wheat bread good?’ The answer is no. You have to teach them that information.”

Strength coaches are responsible for working with multiple athletic programs at a school, so there’s no time to waste. No team is going to benefit from stragglers walking in late to a workout or with negative attitudes. Basil preaches having the right mindset and getting to work.

With limited time, Basil says having upperclassmen take ownership and set the example for their younger teammates makes all the difference. Be sure to utilize your leaders and empower them to help create your ideal weight room culture.

Not everyone has a training table to provide their athletes with food throughout the day, and high school coaches have almost no control over what their athletes eat. While it may not seem like much, Scholz advises convincing athletes to eat well at breakfast because it will serve as a catalyst for the rest of their day.

“My mentor is a staunch believer in what he calls the ‘meat and nuts’ breakfast. The concept behind it is a high-protein, high-fat breakfast with zero carbohydrates … Make it a priority to have whole eggs for breakfast or have a chicken breast with some cashews. Yes, you’ll have to prep it; yes, you’ll have to buy it; but it’s really setting your whole brain and hormonal cascade up for the rest of the day to be successful, and you’ll be amazed at how much better you feel and how much more productive you are.”

When it comes to supplements, Scholz is quick to point out that the quality and source of a product is crucial, “the companies where you’re getting your products is just as important as what products you’re taking, if not more important.”

“[It] helps optimize brain function … [And] provided you’re coinciding it with drastic changes in your nutrition, you should have a noticeable difference in joint pain.”

Scholz provides his athletes with quick rules to follow when it comes to shopping for food. You’ve probably heard to stick to the outside of a grocery store and avoid going down the inner aisles, but he takes it even further.

“You always start with protein, and that’s very simple. If it [had] eyes, and used to run, fly, or swim, it’s good basically. After that, anything that’s a vegetable besides white potatoes and corn is fine. When you’re talking about getting into the carbs section … it’s basically you’re trying to stick to brown rice, quinoa, yams, gluten free oatmeal … The rule for fruit is basically if it’s dark and has a thin skin, it’s better for you than fruit that is light and has a thick skin. Berries are best.

“If you cut out junk food and then follow that, and make sure you’re hitting a water goal, you’ve made some pretty significant changes in a person’s body composition without having to get very complicated at all.”

In the mind of a teenager, following that diet could be a monumental task. Scholz explains up front that once players have reached their desired skinfolds level, he will teach them how “cheat.”

“You have to give them a light at the end of the tunnel … I’ll talk to a player and say, ‘Let’s give it a goal to get your skinfolds from X down to Y. And then when you hit that, not only will you get a cheat [meal], but it’s going to be something that happens on a regular occurrence.’

“The beauty of the system we use is that once guys get the skinfolds in check to where we want, we teach them how to ‘cheat.’ So, I’ll tell them, ‘Saturday night from 6 o’clock on, do whatever you want—outside of breaking a core value in terms of what you’re consuming.’ You may need to go weeks in order to get yourself in line, but weeks is a small percentage of time relative to your whole college experience.”

Bodies need rest to capitalize on the hard work completed in weight room sessions, and Scholz stresses having a developed bedtime routine.

“You’ve got to learn to shut stress out before you’re going to calm yourself down in order so you can rest … With our age demographic, the No. 1 thing is to get rid of your screens at least an hour—if not two—before bed. ‘Screens’ is iPad, iPhone, i-whatever, and your TV. That is critical. After that, you need a basically pitch-black, cool environment to sleep in.”

Putting the screens down is not enough, though. To further calm down and shut out stress, he recommends placing the cell phone at least 15 feet away and not using it as an alarm.

“Get a cheap wristwatch or something and set that instead … A common excuse for guys missing workouts or being late is ‘my phone alarm didn’t go off,’ or ‘my phone died,’ and then I always hit them with the same thing: ‘Is your phone supposed to be your alarm? Okay, lesson learned.’”

This article was written by Alec Finch, Graduate Assistant for the AFCA.