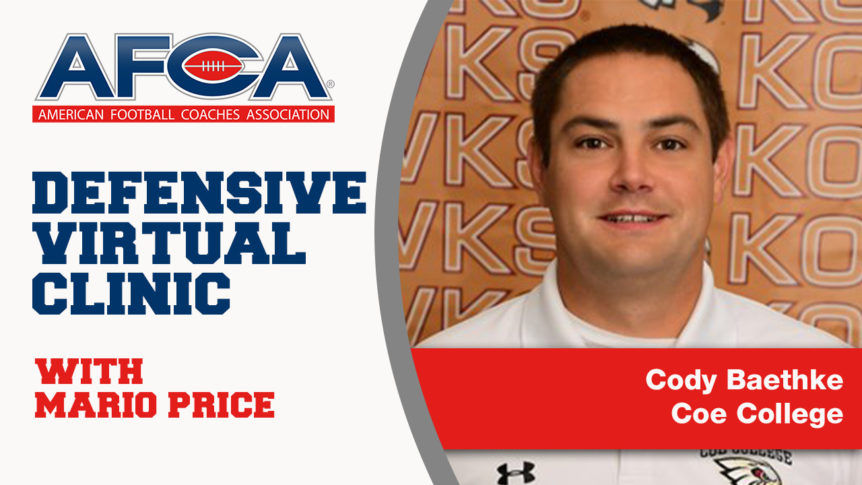 In this AFCA Virtual Clinic, Coach Baethke, the Defensive Coordinator at Coe College breaks down third down film and shares his philosophy for fellow coaches on continued education.

Over the course of last season, Coe College opponents had a 28% third-down conversion rate. Coach Baethke says that third downs are so important to him that they are the second thing he scouts on opponent’s film. This maps out tendencies early on in the week, so that his team will have plenty of time to prepare for the all-crucial down. One way his defense picks up the opponent’s tendencies is by watching their top third down plays in meetings. This allows them to have a visual and understanding of what is likely headed their way.

Set Yourself Up For Success

It is crucial to set yourself up for success on early downs. Coach Baethke shared the importance of winning on first and second down. He said that any offense should get less than 4 yards on first down, as well as second and third down. This will force a fourth down and a decision, depending on field position, for the offensive opponent. Another key to success is allowing less than half of the yardage to gain on second down.

One way to do that is by bringing pressure. Mixing in blitzes and disguising coverages could catch the offense off guard on second down. This will help set up strong third down stands. However, Coach Baethke points out that not only can you run the blitzes and disguise the coverages, but you also have to finish plays to get off the field. Every play has a start and finish. It is crucial to finish each play well to set yourself up for success.

For Coach Baethke’s defense, the first scout team period on Tuesdays is the opponent’s top third down plays. The second period is working on recognizing the opponent’s top formations. On Wednesdays, the team will run eight total plays of 1v1/2v2. These plays can be any situation, so it gives you a chance to really work third down situations for the offense and defense. There are scripted team periods in practice on Thursdays and Fridays. Overall, Coach Baethke projects that the defense gets about 55 total third down reps throughout the week, which should translate to the game on Saturdays.

Throughout the clinic, Coach Baethke also showed game film of different packages and coverages he called on third down plays. From a 3-deep and 2-under concept to a 3-4 alignment with a linebacker bringing pressure, Coach Baethke determined that it is necessary to mix and match calls. He believes that coaches should mix and match man coverage and zone coverage concepts, so the offense will not know what to expect.

He also points out that the linemen should run stunts and have some flexibility to call what they think will disrupt the quarterback. In one clip, Coach Baethke showed a Nickel package concept with 3 down linemen, 3 linebackers, and 3 guys deep. This package was called to hurry the quarterback and force an errant throw. Coach Baethke also emphasized the importance of working through some tough situations in practice.

Q: How many fourth down attempts did you face and what was the conversion percentage?

A: I don’t know exactly how many attempts we saw, but we definitely saw a lot more. 45% on 4th down. We were not good enough there, so we need to get better there.

Q: Have you ever broken down the percentages between all the different third down categories?

A: We saw the most third down plays in the third and medium, and third and long categories. So we scripted for these the most. I also realized we were better on third and seven, so we emphasized those and started running some stunts and mixing up the coverages.

Q: Were there any schemes you saw trending this past year?

A: We saw a lot of sending three guys vertical with two guys running 15-yard dig routes. We had a hole there, so we need to improve, but we saw that concept a lot this past year.

Q: How do you handle tempo calls on third and short?

A: We will do a period during the week where the guys have to run the team play then sprint straight to the skelly and get set for a play there. We throw the disguise out and get ready to play.

Q: Do you have some empty checks or 3 by 1 checks you throw in there?

A: Depending on the down and distance our secondary will know if we’re playing man or more of an umbrella concept. We’ll also mix and match with our Sam and put him on a top guy. We work on our alignment and dare them to throw it out there. We don’t have a whole lot of checks though because we haven’t seen that too much.

For a more complete breakdown of third down coverage concepts, tune into Coach Baethke’s virtual clinic. To watch Baethke’s Clinic, along with numerous other videos, please log in to your AFCA membership account and search through the AFCA Educational Library.