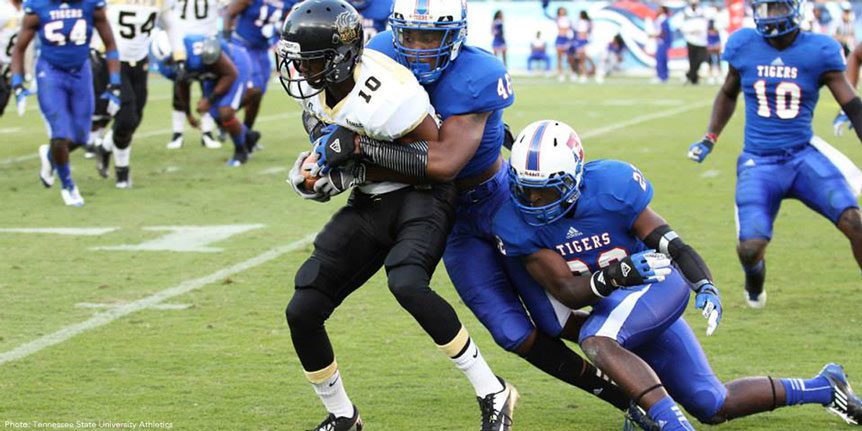 Coaching beyond the X’s and O’s means leading, guiding and mentoring young men both on and off the field. It means continually proving to yourself that you have what it takes to be successful in this profession.

One of my mentors, Duke defensive backs coach Derek Jones, once told me, “If you want to make it and have great success in this business, you’ve got to be able to do a myriad of things really well to separate yourself. You’re always selling yourself as an individual.”

That bit of knowledge has paid big dividends in my young coaching career and has shaped part of my core values as a coach. I believe in having a set of standards that I can always lean on during the good and bad times.

Getting Started In Coaching

Originally, I didn’t think I would ever get into coaching until I started volunteering my time at the youth football level during my CFL playing career.

One spring day in April 2008, I was working out in an Atlanta-area fitness center and was approached by two men saying they heard I played professional football. They asked if I had time to speak to their football team and maybe show them a few things.

Of course I agreed, simply because I remembered growing up playing youth sports and the impact it had on me when professionals would take time to speak to us.

Little did I know at the time, I would be released from CFL at the start of the youth football league season. So initially – just to occupy my time – I called those two coaches who approached me at the gym and asked if I could help coach until I was picked up by another CFL team.

However, once I started working with those young athletes, I realized I had the ability to lead people. It was through this experience that I began to hone and develop my skills as a coach.

Fast-forward three years later to fall 2011. I was released once again from the CFL and went back to work with the same youth football team. The players were now 11 years old.

We went on to have great success that season, and during one of our last practices, a parent made the comment to me, “Coach, you should go get paid to do this. It’s your passion and you have the ability to lead and teach young men.”

After making that decision, it was my job to figure out how to get into coaching as a career. I knew I wanted to coach college football at the FBS level, but knew I had a lot of leg work in front of me to get there.

A good friend of mine, Clemson defensive tackles assistant coach Todd Bates, recommended that I go out to local colleges and universities and ask to volunteer with their football camps.

He explained, “At that point, you can start to network and get to know coaches outside of your circle.” Because I like to dream big, I decided to take Coach Bates’ advice one step further and not only visit local colleges and universities, but reach out to all FBS/FCS coaching staffs across the country. I still have the letters and emails to prove it.

Remembering those first steps just keeps me humble and hungry. I figured if I reached out to over 200 schools, at least 10 would respond. Little did I know, I would receive an overwhelming response.

In the summer of 2012, I replied to the first two schools that responded. Coach David Bailiff (Rice University) and Coach Larry Coker (UTSA) allowed me the opportunity to come out and volunteer with their programs.

I booked my flight, hotel and rental car. The rest is history.

In addition to that, at the AFCA Convention and various clinics, I continuously make it a point to get out of my comfort zone and mingle with coaches that I haven’t previously come across whenever the opportunity presents itself.

Eyes On The Prize

The road to where I’m going is not simple. The coaching lifestyle requires total immersion.  As coaches, we constantly preach to our players, “Take care of the little things.” However, most of us don’t apply it to our own lives.

For example, when it comes to the constant grind of the season, recruiting, spring ball, and summer camps, it’s important to stay on top of my game by eating healthy as much as possible, exercising adequately, and getting frequent health checkups.

It’s tough pulling oneself from the busy schedule, but I believe in the long term, it will help me work smarter, become a more effective thinker, and most importantly, reduce stress.  Additionally, finding time to spend with our family and friends are often difficult as well and requires them to be incredibly understanding of our demanding schedules. Not everyone can handle this lifestyle.  I’m just grateful to have found a woman who is extremely supportive and understanding.

To me, the most important aspect of this business is building personal relationships with players and the coaching staff. I believe it’s important to know the guys I work with, because as time goes by, steadily maintaining those positive relationships on and off the field carries over onto the team.

Building and maintaining those relationships is critical because as our coaching staff grows closer, it demonstrates a family environment to our players and in turn creates a trusting atmosphere. This can have a major impact on the overall performance and attitude of players on the field.

When these young men come to college, as coaches, we become an extension of their parents. Over the next 4-5 years, we’ll see them the most and play an integral role in how they view the world beyond their college years. It is that knowledge of the impact I personally have on these young men that encourages me to stay true to my ideals.

From a young age, I was taught, “It’s easy to put in work when there is an audience, but extremely difficult when no one is watching.” That is the one thing I believe sets me apart from other coaches across the country. I also live by the standard, “What happens in the dark will come to light.” So whatever I’m doing, eventually someone will take notice.

At the end of the day, my greatest critic has always been myself and I’ve constantly pushed my mind, body and spirit to the brink because I believe we all have a purpose and have been given the tools to progressively learn and in turn become an overall better individual. This is something that has always been a part of my personal philosophy.

This article was written by Ahmaad Smith, Nickelbacks Coach, Dartmouth.