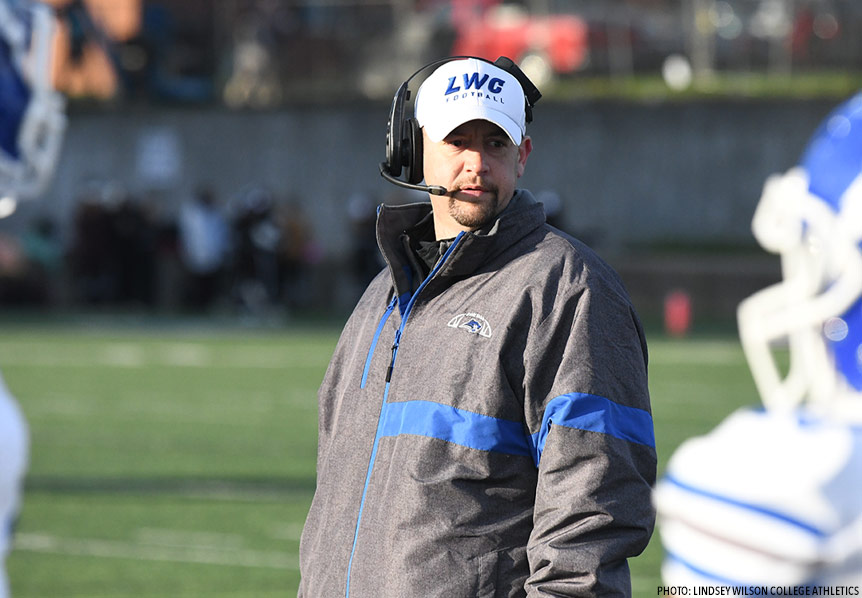 The group mustered near the 50-yard line seemed out of place inside the vast 19,600-seat stadium, home to the Grambling State Tigers, but “The Hole” couldn’t have been a more perfect venue for the dozen young men who would receive their diplomas. For the Blue Raiders, they wouldn’t rather be anywhere else in the world to commemorate their commencement, as they stood on the precipice of their first national championship in program history.

On Saturday, they breezed through the end of their undergraduate studies like it was no big deal. On Sunday, they handled the end of their college football career in precisely the same fashion, crushing Northwestern College 45-13 to cap an undefeated season and etch their names in the NAIA history books.

“Just summing up their GPAs, their degrees, their record over the years doesn’t do it justice for what this group of guys really did for us as a program and the challenges that they took on over the past number of years,” LWC head coach Chris Oliver says of the contributions of the senior class.

In many ways, the seniors were the embodiment of the LWC 2020-2021 season motto, “Make A Way.” After three 11- or 12-win seasons in the last five years where they fell short of the ultimate goal, this team’s leadership knew the taste of defeat, even after throwing themselves into navigating all avenues to their desired destination. This year, if an apparent route to victory didn’t present itself, the Blue Raiders were prepared to blaze their own.

The team’s performance on the field indicates a tremendous amount of buy-in and belief. Their no-excuses mentality manifested during a season full of challenges completely outside their control, and they rolled to a perfect 11-0 record.

Winning 11 games is an impressive feat, but the 11 years of winning culture it took to get to this point represents a remarkable achievement. The dedication, vision and patience necessary to build a championship program the right way still poses a challenge many today are either unable, or unwilling, to take on.

For LWC, it’s been a long time coming, but don’t tell Oliver. He remains unbothered by the decade-plus journey it took to get to where the program is today.

“This has been a short process in the big picture,” Oliver says. “From when we started the program 11 years ago to getting to this point, there’s so much that goes into that. I think the thing that really hit me after the [championship] game the other night was I was so excited for our current kids, the kids that went into this 2020-21 team, and winning this championship.

“It certainly is a special time, but there’s still so many alums of our programs who are still fresh in my mind. I think back to when we kicked off in 2010, and there were guys here in 2009 who red-shirted, and we didn’t play any games, and those guys put so much trust into us.

“I’m so happy for our current kids on the team, and they sacrificed so much to get to that point to be able to win the conference championship, make the playoffs, and make that run through the playoffs. But also, just the guys that helped build this program over the past decade plus. That’s really the special aspect of what this means to us. I think it’s bigger than just this year.”

What Oliver has accomplished at LWC is nothing short of a dream scenario for a coach. Sure, it would be great to get the gigantic payday accompanying an FBS blueblood gig, but when you have an opportunity to start at the ground floor and build something that puts your school and your town on the map in a big way — well that’s a whole different sort of payday. Suffice to say, Oliver won’t be paying for too many dinners in Columbia, Ky., anytime soon.

So, how does a coach start from scratch and achieve this kind of success? It’s a question many AFCA members ask themselves every year.

“I don’t think there’s a magic bullet to winning a college football championship,” Oliver says. “There are so many aspects and moving parts of a college football program. It takes doing a lot of those things at an extremely high level and trying to do it better than your competition, and knowing those guys are trying to do the same thing.”

No coach, no matter how charismatic or talented, reaches the top alone. Oliver would be the first to give credit to the leadership at LWC. He’s benefitted from the same president, vice president and athletic director for his entire tenure, and credits their support for much of his success.

Beyond that critical element, the Blue Raiders have made a concerted effort to recruit not just talented players, but players with championship character.

When your team is comprised of players who are willing to put in the work, have the right attitude, are selfless within the team setting as well as in the community, and do the right thing when no one is looking, coaches give themselves an opportunity to set championship standards. Once the standards have been set, the key becomes upholding them at all costs and refusing to take shortcuts, no matter how tempting.

Oliver recalls learning these lessons during his time on Dale Carlson’s staff at Ohio Dominican University.

For Oliver personally, the slow- cooked approach to success has been worth it. He hasn’t always been on the winning side. In fact, he remembers some tough days before taking his current position — days where he didn’t just lose on the field but felt like the loser in pursuit of some career opportunities he thought he wanted.

“I was kind of chuckling to myself the other day, what a blessing missing out on some of those jobs is,” Oliver says. “When you’re in this profession, whether it’s as head coach, assistant coach, man, you’re probably going to be turned down a lot more than you’re hired. Sometimes you get wrapped up in that and that’s part of this profession, but sometimes that can be a blessing and you may not realize it till a decade later.”

For coaches asking how to achieve a dream similar to what Oliver and LWC have achieved, the message is clear. Keep chasing it. Don’t take the easy path. Don’t prostitute your integrity. Don’t bend the rules. There’s a big red banner in Columbia that’s proof positive it’ll be worth it.