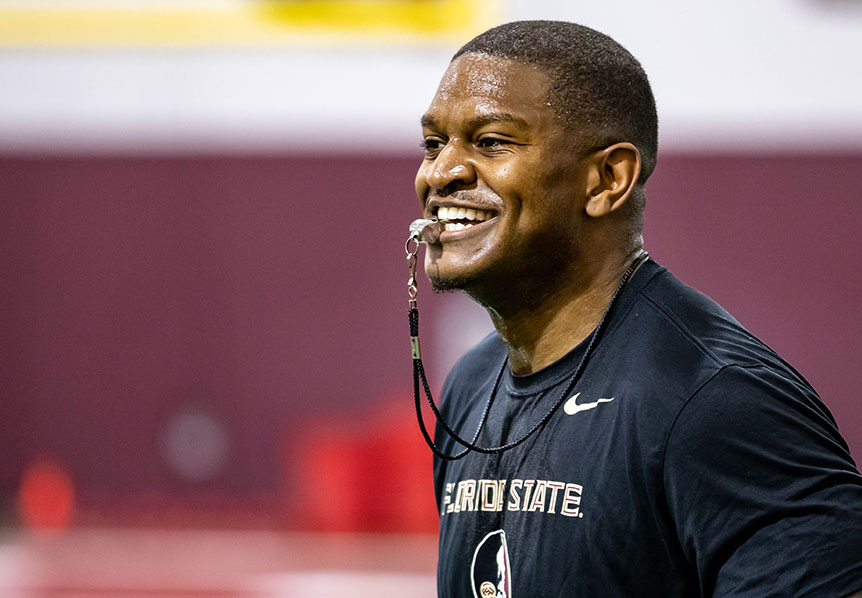 Chris Marve admires how the game of football brings together and unites people from different backgrounds with a common goal. That sense of wonder is why he returned to the game shortly after his playing days at Vanderbilt ended in 2011.

“Coaching football is a tremendous vehicle to inspire others to be positive influences on individuals in their lives and in their communities, so that they can impact change,” says Marve, the linebackers coach/defensive run game coordinator at Florida State University. “It was that way for me when I played, and I’ve seen it be that for countless other young men. I became very interested in that role. It fit for me.”

He realized all of this at Vanderbilt, where he joined the program not as a highly rated recruit, and yet he finished his playing career as one of the all-time great Commodore linebackers.

When Marve hung up his cleats, he ranked ninth all-time at Vanderbilt in tackles. He was a four-time All-SEC linebacker who served as a team captain his junior and senior years. Despite almost certainly being drafted into the NFL, Marve, a man of faith, felt as if he was destined for a different path.

He taught at a middle school in Nashville for a year before returning to Vanderbilt to work as a defensive quality control coach. He then entered Vanderbilt’s graduate program for higher education administration while serving as a graduate assistant with linebackers. After earning his graduate degree, he was hired at Vanderbilt to coach inside linebackers from 2016-18.

During this time, a Vanderbilt linebacker was drafted into the NFL in three straight seasons. They included Stephen Weatherly for the Minnesota Vikings, Zach Cunningham for the Houston Texans and Oren Burks for the Green Bay Packers. This had never before happened in the history of Commodore football. Marve eventually moved to Mississippi State University for a year before being hired by Florida State for the 2020 season.

“I’m still very passionate about seeing young people grow, develop and become their best selves. The space of sport, particularly football, allows you to do that,” Marve explains. “You learn the prerequisite skills that it takes to be a successful person. How to be a really good teammate. How to be a really good communicator. How to be a student and learn consistently. How to navigate the space with people who may be completely different from you but be working toward a common goal. How to challenge yourself. How to deal with adversity. And how to become a better person. Just because you’re faced with things you wouldn’t necessarily always be faced with.”

At the young age of 31 years old, Marve, who in 2017 was recognized by the AFCA in its 35 Under 35 Coaches Leadership Institute, isn’t so far removed from his playing days that he can’t understand how important football is for a student-athlete while on campus, as well as for his development after graduation. He loves being a part of something that positively influences the trajectories of people’s lives.

“Being able to see young people who come into a program, who develop over time and leave as men, who leave as graduates of a university, who go on to become husbands and become fathers and — quite frankly, who completely change the trajectory of their families because of the education they received and the opportunity that they earned. That has been really fulfilling and really rewarding,” Marve notes. “Every young man I’ve coached has a completely different background and comes from a completely different family or part of the country. It’s been really special to watch those guys grow and become men.”

Of course, when you are a young coach trying to make your mark in this profession, it’s a strain on family. Marve has a wife and a one-year-old daughter, so the time away is a challenge, but he’s found ways to include them in his daily work life. If the team relationships and atmosphere are positive influences on players, then they certainly can be on family members as well.

“Something I do to mitigate that is I integrate my family into everything we do. My wife and my daughter are extremely vital in our relationships with our players and how we go about making sure those young men are developed. We want them to feel like they are at home even though they’re away from home. We make sure they feel they’re able to grow in their faith, they’re able to grow as people outside of football and that we’re involved in the community through community service.”