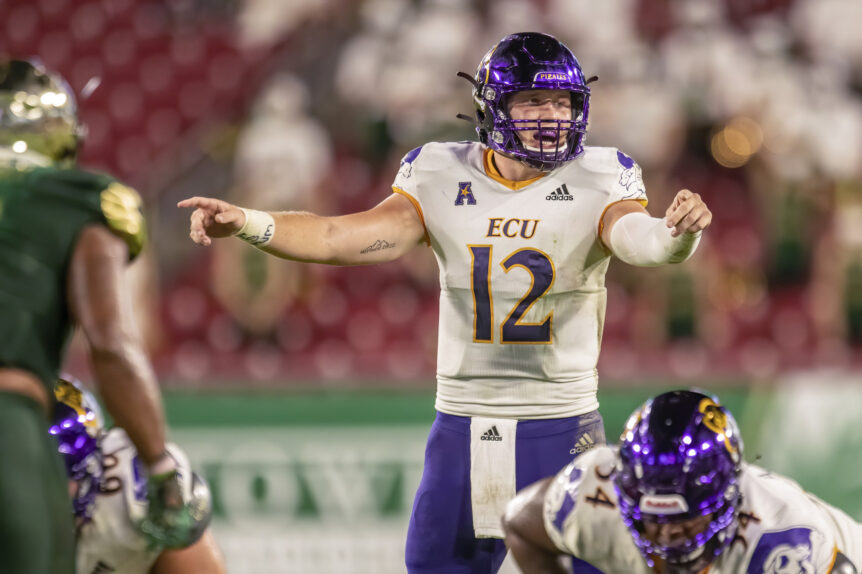 In college football, RPO’s are a common feature across many offenses these days. RPO’s are giving offenses huge advantages by forcing certain defensive players to make a decision in which they can’t be right. Most RPO’s operate off of some type of zone run action. We have had a lot of success running RPO’s off of draw action in a 10 personnel 3×1 formation. This article will walk you through all the different layers and coaching points of the “Draw RPO.”

The offensive linemen are going to handle the four down linemen and the backside linebacker, which is why it is important to identify the play side linebacker. The tackles and the guard, who has the three technique on him, are all man-on blocking. These are jump sets in which the offense is trying to set up the draw by giving pass action with their sets. The center and guard, who have the shade or 2i technique, will double team him on the jump set. Depending on who has the cleaner path after the jump set, that lineman will work his way up to the backside linebacker. Usually it is the center that can climb the easiest. Having healthy splits (two and a half feet or more) will help with run lanes while allowing lineman to climb to the second level.

All four wide receivers have specific roles and all have the opportunity to have the ball thrown to them. Starting with the single receiver, he is on the pick route concept. The quarterback will signal to him before the snap, what route he wants him to run based on leverage and match up. These routes can be a hitch, quick out, slant, or a vertical takeoff, the default route. The number three, or inside, wide receiver to the trips side, will run a 5-yard hitch route. The number two wide receiver will run a flat bubble, where it is more important for him to get width immediately rather than get any depth. His number one job is to stretch the flat defender and make him expand. The number one, or outside, wide receiver runs an outside release takeoff route. Healthy spacing between all three receivers in the trips formation is crucial to the success of this play. See Diagram 1.

That is the Draw RPO on the surface level. We will get into specific looks and how to handle five, six, and seven-man boxes.

This is the look that is the easiest to execute with the least amount of thinking. A five-man box against a 10 personnel 3×1 formation is an automatic handoff every time. The key coaching point for this formation is the offensive line must realize it is a five-man box and that they are now responsible for the four down linemen and the box linebacker. This breaks away from the original rules pertaining to four down linemen and a backside linebacker.

There has to be more communication between the center and guard, who have the 2i technique, or shade, over them as well as the linebacker, who is more than likely lined up on top of the center. Instead of a true double team, the center will have to give initial help to the guard and then climb a little quicker. The quarterback should be the first to recognize the five-man box, so this is an automatic handoff. Some game situations might dictate a throw, but the base rule is to always hand it off against this look. See Diagram 2.

The six-man box is where some thinking and reading takes place. As in the introduction, the quarterback is now reading the play side linebacker to make his decision. The offensive line goes back to its base rules of being responsible for the four down lineman and the backside linebacker. The offensive line’s spacing will help with defensive line movements and stunts as well as allowing the lineman to climb to the second level.

When we refer to 3-over-3 toward the trips side, that means we are seeing three defenders all on the same plane, which indicates man coverage. This look proposes a problem for this play because there is not a player in conflict anymore. All four of our routes can be covered and the play side linebacker can remain in the box to take away the run. Like I stated earlier, the six-man box is where some thinking and reading takes place. The quarterback has to recognize the man coverage look and know that everything is covered up. We have to create some kind of advantage now.

The quarterback still has the options to throw one of the outside routes. After receiving the snap, the quarterback should look at either outside route and, if he likes what he sees, throw it. If he doesn’t like either option, it is now time to tuck the ball and run behind the running back. The offense is now hat for a hat and the quarterback should be matched up one on one with the safety. If the defense decides to check out of the man coverage to some type of zone look, then the offense is still in a good play. Once the quarterback tells the running back to “LEAD,” leave it on. The last thing any offense needs is confusion in the backfield. See Diagram 5.

The seven-man box against this formation is a tell that the defense is selling out and playing some form of ‘Cover 0’ whether they bring pressure or not. For the offensive line it is very important that they identify the play side and backside linebacker as another linebacker has now entered the box. Their responsibilities do not change, however, as they will still handle the four down lineman and the backside linebacker.

For the quarterback this is a very similar look to the six-man box with a 3-over-3 look. He will turn to the running back and tell him to “LEAD” with no safety in the middle of the field. This is the time we really want the quarterback to throw the vertical to the single receiver. Whatever the route is, it must be a great man beater.

On the snap of the ball, the quarterback will take the best matchup. He must play fast, especially if the defense is in a blitz posture as he will be hot. In this look, we clearly want the ball to be thrown for a big play. However, if neither outside receiver gets a clean release and the defense is not in a blitz posture, the quarterback has to pull the ball down, he must follow the running back and know to beat the or runaway from, the unblocked defender, or the seventh man in the box. While this approach is not ideal, if the quarterback can make him miss, there is no one left to make a play until the quarterback reaches the end zone. See Diagram 6.

Ryan McManus was appointed as Senior Offensive Analyst at East Carolina University in March of 2020. Prior to accepting his post with the Pirates, McManus served as the quarterbacks coach and director of football operations at Winston-Salem Sate for four seasons (2016-2019).

He earned his first full-time position as varsity quarterbacks coach at South Brunswick High School in 2015. Prior to that, he served as a graduate assistant coach (offensive line) at his alma mater, Wake Forest University, from 2012 to 2014.