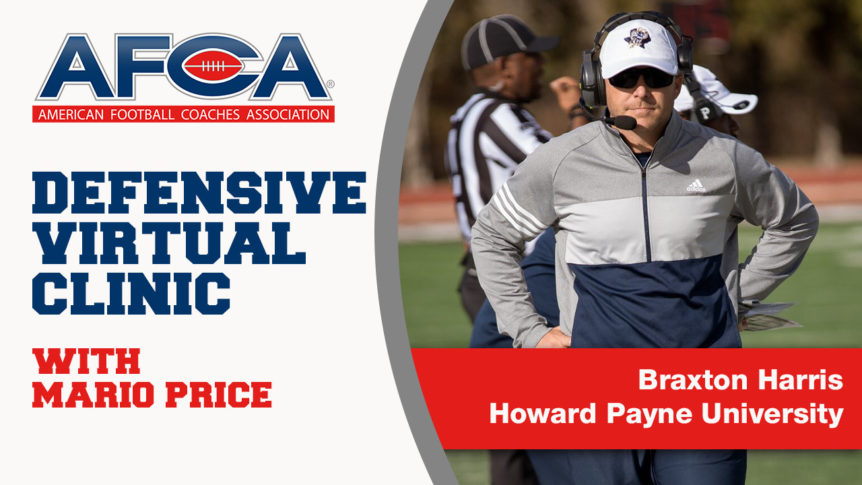 Former member of the AFCA 35 Under 35 Coaches Leadership Institute, Coach Braxton Harris goes into detail on his scheme of 4-2-5 defense in this virtual clinic. The purpose of this package is to get as much speed on the field as possible with players who run the passing lanes as well as work in space to stop runs. In this talk, Coach Harris shows the base alignment of his version of the 4-2-5 defense, as well as the specific assignments.

Starting with the front, the four down linemen get set based off of the running back of the opposing team, which a three-technique tackle would be placed. The Sam linebacker is placed on the field-side outside of the number two receiver along with the field corner and free safety. The Mike linebacker is placed in the A gap with the Will linebacker in between the end man on the line of scrimmage and the number two receiver on the boundary side.

Coach Harris heavily emphasizes communication throughout his defensive unit at Howard Payne. He speaks on how calls must be effectively rippled to all eleven athletes on the field in order to have consistent success. The key is to keep communication minimal, so disruption is minimal, especially during the game when you have only seconds to get calls in. Coach Harris only allows three people to make calls on the defense and those are the Free Safety, Mike Linebacker, and Jack Safety. The Mike linebacker is responsible for setting the front of the defense, the Free Safety and Jack call the coverage for the field and boundary; respectively. Communication is the biggest piece of the puzzle.

“If he doesn’t hear your call, it doesn’t matter how good the call is or how good of a defensive coordinator you are,” says Harris.

In this coverage technique, the field and boundary-side players have different responsibilities that form together. The players on the field-side are working a robber technique, while the boundary players work with a slice technique. The Mike reads the guard to dictate run or pass by watching his head and not just his steps. If the Mike drops in pass, he will go through his four eye progressions to take away any routes that may fall into the middle of the defense and toward the field-side.

These steps are easily teachable, as well as a method to gain feedback on what your athletes are seeing on the field. The Sam linebacker is reading the tackle for run/passkey, and in robber is the edge setter on the field-side. That vertical edge is set in the Sam’s stance with his outside leg setting that vertical line. He is the place setter, so that everyone knows in the event of a run to the field, all guys are flowing to the Sam. The Sam’s pass assignment is working the flat to the hook and curl or comeback of the number one receiver. The field corner and Free Safety use the route of the number two to dictate their respective responsibilities. The field corner is aligned six yards off the line and two yards inside of the number one wide receiver (with their hips pointing to the ball) while keeping their back to the number one receiver.

Coach Harris uses the rest of the virtual clinic to show other variations of the package. He likes to play football as a numbers game, and shows one instance where the odds are out of favor in base alignment. He also shares how he lines his players up against a trips look with a combo coverage concept that combines man and zone principles.

At the end of the session, there was a question that was asked by a viewer about disguising and how often Coach Harris uses disguise. In his answer, Coach Harris explains that he utilizes different calls and some would call for a disguise. The main thing is to effectively communicate to your players where they should be and what they are looking at, so that in disguise they can get back to their original alignment. For more information on this 4-2-5 package go check out this informative virtual clinic!

Don’t forget to tune into other content in the AFCA Educational Library. This content includes anything from drills and coaching tactics to convention sessions and podcasts that can better help you and your football program.