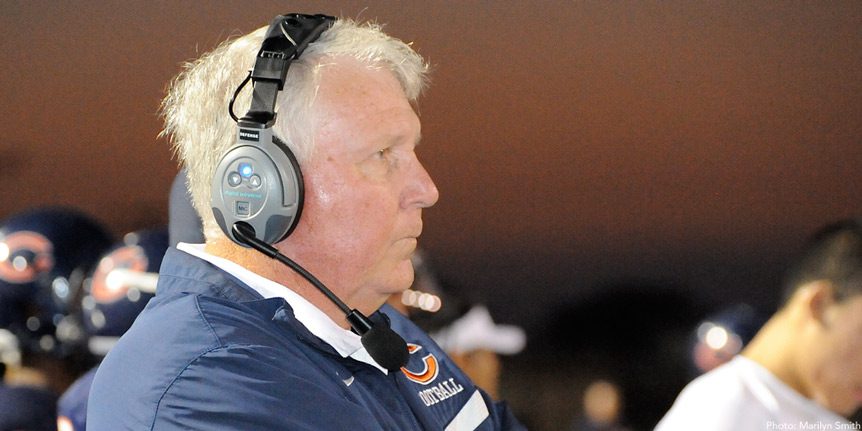 There are individuals among us who want to be seen as leaders of men and who want to be recognized for having great influence on the world. Others crave positions of power as a means to gain greater influence. Whether ego-driven or an altruistic vision, this yearning to influence often requires a need to shout from mountaintops and stand in the spotlight. And then there is someone like Bob Burt, who won the 2013 AFCF Power of Influence Award, an award that has grown in notoriety and is now officially presented by TeamSnap during the general session of the AFCA Convention.

Burt, a veteran coach at the high school and college levels for more than 50 years, is a man who has influenced scores of people and helped countless others through sheer displays of positive actions – solely for the purpose of helping the greater good of the community. He is a man keenly aware that, as a football coach, he has an opportunity to make a real difference.

Burt doesn’t talk about being an influencer. He simply influences through a collective volume of positive work. This work is driven by a personal mission to serve – to serve his community, serve his players and serve the game of football – all of which he has done regularly, and relentlessly, during his career as a head coach.

Burt’s story is unique. It is fascinating from a coaching perspective and motivating as an example of how a motivated person can make a real difference by helping people. At the same time, his tale is also both equal parts heart-breaking and heart-warming. And it all centered on a man who views himself as an ordinary, everyday football coach.

With a career in coaching that started in 1962, Burt says he’s never held another job outside of football. He also proudly points to the fact that he’s only ever worked for four head coaches total before ultimately becoming the head coach of his own team. The coach from Southern California views all four men as personal mentors and speaks in glowing terms when describing the impact they had on his development as a coach.

“I’m extremely fortunate, in that, I have only worked for four men in my life and all of them were tremendous mentors,” says Burt. “All four individuals were also about as different from a personality standpoint as you could possibly be to one another – yet I learned something special from each of them.

“They all had one amazing thing in common, too. Each of the four head coaches I worked under all hold title as ‘the winningest head coach in the history of their school.’”

Burt says that all four his former bosses – Marijon Ancich, Terry Donahue, Dick Tomey and Gene Murphy – all possessed unique attributes that drove their success. He tried to absorb each trait along the way, and ultimately, those characteristics became the tenets he used to develop his own coaching philosophy.

“The Worker” & “The Communicator”

Burt’s first job in coaching was in 1962, where he served as an assistant coach at St. Paul High School (Santa Fe Springs, Calif.), working under Marijon Ancich, who is now considered a legend and is often called, “The Dean of High School Coaches.” Ancich is the second-all-time winningest coach in the history of California high school football and has an all-time record of 360-134-4 (second in all-time wins only to Bob Ladouceur’s 399 career wins at De La Salle High School in Concord, Calif.).

“Marijon Ancich had just an incredible work ethic,” says Burt. “Working for him taught me about the importance and value of work ethic to a football coach.

“There is nothing about our jobs as football coaches that is 9-to-5. You’d better forget looking at your watch – unless it’s a timed segment in a practice, of course – and don’t concern yourself with the hours you’re putting in. Try to focus on getting your work done.”

In 1975, Burt left the high school ranks and joined Terry Donahue’s new staff at UCLA. Donahue would go on to be the winningest coach in the history of UCLA Bruin football. The coach describes how his time at UCLA taught him many valuable lessons on handling all aspects of a large-scale football program – especially as it pertains to communicating with a wide variety of people to get the job done. When it came to people skills, Burt says, that Terry Donahue was a master.

“Terry Donahue could communicate with everyone – players from different backgrounds, school officials, members of the media, you name it,” says Burt. “He showed me just how important that people skills and the ability to clearly communicate is to a football coach.”

Burt also says that coaching in the college ranks was a humbling experience. After more than a dozen years of coaching in high school with a fair amount of success, he says the reality of coaching college football hit him early.

“I thought I was a hot-shot who knew a lot about football coaching,” says Burt. “Well, when you get to the college ranks, you discover in very short order that you didn’t know nearly as much as you thought you did. College coaches possess vast amounts of knowledge.”

“The Organizer” & “The Bright Light”

“Tomey taught me the value of being organized,” says Burt. “I mean, that man was the most-organized football coach I have ever met – down to the most meticulous detail. Being organized allowed him to function at the highest-possible level as a coach.

“Another thing that Tomey taught me was that, as a coach, YOU are the person who is ultimately responsible. The buck stops with you. If a player is not performing up to his fullest capability, then it is something YOU are doing wrong as a coach, and you’d better fix it.

“I learned that it’s critical to examine your coaching methods and continuously evaluate the entire coaching process. What are you teaching a struggling player, and how do you teach it?

Burt also credits Tomey for showing confidence in him and giving him the opportunity to serve as coordinator on his staff – which he says, probably more than anything, put him on the path to where he is today.

In 1980, Burt joined Gene Murphy’s staff at California State University in Fullerton, Calif. Murphy is the winningest coach in the history of Cal-State Fullerton football. Burt remains outwardly grateful and deeply moved by the impact Gene Murphy, who passed away in 2011, had on his life.

“Gene Murphy was just a bright light to everyone who was around him,” says Burt. “More than anything, Murphy taught me that, along with everything else I had learned in my coaching career – the knowledge, the work ethic, the organizational skills, the need to continuously self-evaluate – was that a football coach must remember to embrace his love of the game and have FUN.

“Enjoying the game is often overlooked. It’s something coaches don’t often discuss, but having fun is critical to maintaining longevity in this profession. Have fun while you are working hard – in what is oftentimes a very difficult job.”

Despite having four coaching legends as professional mentors, Burt says that the learning and development process for a coach never stops.

In 1986, Burt took over as the head coach of his program at California State, Northridge. Armed with the lessons of his four coaching mentors, loaded with an abundance of knowledge and fueled by a passion for all aspects of coaching, the coach says that a desire to give back to the game began to grow.

“Like all young coaches, I started out just loving many aspects of the game – the competition, the strategy and helping develop young players,” says Burt. “Most guys who get into football coaching enjoy those aspects of the game.  Over time, I began to realize that there was more to it than just the Xs-and-Os.

“The true size and scope of the role as a leader of the football program began to sink it for me – how we affect people, how our program affects the school, our impact on the local community, how we are viewed by parents – all that stuff. When you start to grasp the wide-scale impact that you can have as a coach in this sport, it becomes humbling and provides a deep sense of purpose.”

Burt says that he eventually came to the realization that he was getting more from the game than he was giving back. He says that had to change.

“I knew that I could do more to give back and do more in my capacity as a coach than just prepare for a game or prepare for a season,” says Burt. “I felt as if I was wasting my potential as a head coach to do more. So I decided to take action to correct that.

In Part 2 of our series, we will learn how Coach Burt used personal tragedy to create a sense of urgency for helping people in his life. This article was written by Mike Podoll, associate publisher of AFCA Magazine. To connect with Podoll, follow him on Twitter @fcdaily_podoll.