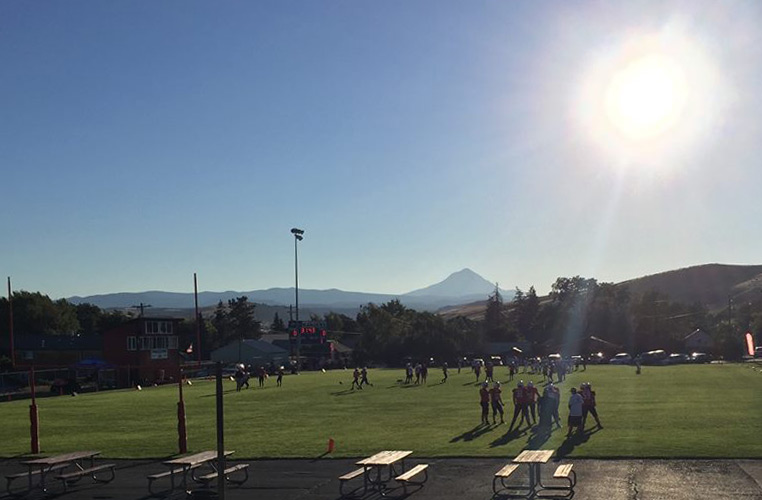 Jeff Riley’s thought-provoking new book, Big Time: The People, The Places, & The Game of Oregon 8-Man Football, provides an intimate journey into the culture of a gritty, impassioned brand of high school football that is played in the small towns of Oregon that are painted into the backdrop of some of the most spectacular landscapes in America: snow-tipped peaks, fog-shrouded forests, and rocky canyons so deep, they reach into your very soul. The high-scoring, wide-open affairs are played by 16-year-old kids who toss hay bales by day and footballs by night. They are coached by former rodeo clowns named Stub, weather-beaten cattle ranchers, and former standouts crippled by logging accidents — men who doff their caps as the autumn sun drops behind 9,000-foot peaks, look down their line of scrappy players with hands on hearts, and have a moment. “The sun sets behind those mountains on game night, and I mean, wow,” says Joseph coach Toby Koehn, whose field is dwarfed by the 9,839-foot majesty of Sacajawea Peak. “I don’t know where else anybody would want to be in the world at that moment.”

“Great book! As a football coach, I’m always interested to hear about football in different areas of the U.S. I really enjoyed the stories and the descriptions of the programs, players and coaches! Well done!”

“I’ve heard the comments from the 11-man people, things like ‘Oh, do you guys play with a smaller ball?’ As if our game is less than 11-man,” says Jack Henderson, whose teams have won more Oregon 8-man state championships than any school in the sport’s 47-year history. “Eight-man is more of a game, if you ask me. Besides, it’s like what I tell my kids: The big time is wherever you’re at.”

Now the big time can be where you are at! Order Big Time now on Amazon, and see why coaches across the country are learning more about their game by exploring the 8-man football world.

Get Your Copy of Big Time Now!

Jeff Riley is a former sports writer with the Los Angeles Times whose work has appeared in several of the nation’s top newspapers, including USA Today, the Miami Herald, the Denver Post, the Oregonian, the Hartford Courant, and the Indianapolis Star. He was raised in the Willamette Valley and earned a journalism degree from Oregon State University.