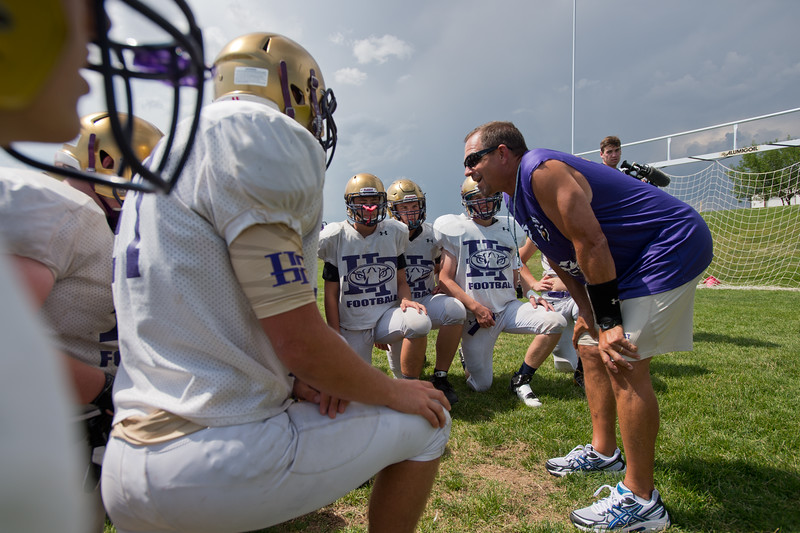 There is now and will be for the foreseeable future a place in American culture for football because football directly translates to many facets of life. Football prepares young people for many of the trials they will experience in adulthood unlike very few other activities they will experience, and it provides social lessons that cannot be replicated in the same way off the field. Most importantly, football leaves a lasting impact on those that participate. Often when talking to former football players they don’t immediately share stories of wins and losses. Instead, those stories are superseded by nostalgic memories of team dinners when they couldn’t wait to be seniors so they could be in the front of the line to get one of the mom’s famous mostaccioli, or that time when a coach gave them a ride home after practice and they talked about the shared experience of losing a loved one or the time that the practice drill they always hated made the difference in the game against their biggest rival.  Although football provides many lessons that aren’t shared in this article, the following are a few observations taken from the last 25 years playing and coaching this great game.

Football Translates To Careers in Business

The game of football is often referred to by coaches as “the greatest team game ever created.” Unlike so many other sports where a dominant individual performance can decide the outcome, football is based almost entirely on working together. The best teams are often those that can unify for a common cause. Because of this mentality, football is a microcosm for 21st-century American business culture. Football creates a naturally collaborative environment that is not only compartmentalized in terms of individual skill and technique but also group oriented in terms of outcome. This is essentially what human resource departments look for when hiring candidates in each department of a company. They simply ask, “Can the people we hire do their jobs while helping the company reach its larger goals?” This question is essentially the same as a coach diagramming plays for his/her offense. One of the greatest representations of this is when an offensive lineman, who has been battling play after play against his defensive competitor, runs to the end zone to lift his running back over his head as they both celebrate their shared success.

Building a team around the idea that everyone’s individual success is secondary to the team’s success is similar to a company that has a great salesperson. The only way that salesperson is truly successful is if the packing, shipping, receiving, and other departments of the company can keep up with his/her sales. If the company can’t keep up with the inventory and sales numbers, customers become frustrated and the entire group suffers, but when the logistical team is at the top of their game, the whole group succeeds.

This commitment to the greater good is what makes football great. A perfect example of this is when a defensive lineman pressures the quarterback resulting in an interception; each of those defenders’ efforts contributes to a favorable outcome for the team. Regardless of one’s position, the key ingredient for collective achievement is that each member does the job he/she is asked to do with maximum effort. In this way, football teaches that individual glory is secondary to team success.

Football provides a foundation for working in diverse communities. The football huddle is like an incubator for diversity training. Within a huddle, all eleven people are competing together to reach a common goal regardless of race, ethnicity, religion, gender, sexual orientation, socioeconomic level, or any other demographic identifier. There is not a specific color or creed that represents speed, tenacity, or courage. This is exceptionally important because individual differences are celebrated in football in order to create teams that unite those singular talents into competitive units. Young people that play football learn quickly that the whole of any successful team is directly related to the sum of its parts, and the best teams are not dominated by one particular shining star player but a conglomerate of all shapes and sizes working as one.

A recent video that made its way to Twitter depicts the concepts of individuals working together for a common purpose perfectly. It came from Jason Whitten’s retirement ceremony when Jason Garrett was explaining what the Cowboys called Y choice, the play that made Whitten one of the greatest tight ends in the history of the NFL. Garrett’s commentary of Whitten’s explanation to the team of how that play actually worked in a clip from a playoff game against the Lions is one of the best explanations of the synergy necessary for a successful football play. The video is linked here.

.@JasonWitten was asked to give a presentation on his signature play.

And it brought his head coach to tears. pic.twitter.com/LVKnvgrxx0

The previous video represents how through football, young athletes learn that acceptance of all within a huddle creates a team culture that celebrates everyone’s specific contributions while naturally limiting the emphasis placed on any particular individual. This type of team concept formula is found from successful high school programs all the way up to the NFL.

RELATED ARTICLE: Power Of Influence: Tony DeMatteo And His Decades Of Perspective

The previous year’s NFL playoffs provided another example of the inclusive nature of football and how it equates with team success. As anyone that follows football knows, the quarterback position is often referred to as the most important position on any team, but during the 2017-18 NFL season the four quarterbacks who started in the conference championship games averaged 34th in their against the cap salary hit to their teams (Tom Brady being the highest at 19 and Nick Foles being lowest at 47). Additionally, of the top ten quarterback salaries against their team’s salary cap, there were only three out of the ten that even made the playoffs. These statistics represent an unmistakable truth that coaches teach their players about football and life: an individual’s value to his/her team/organization is measured by the total output of the group, and its many diverse individuals/components, rather than by the individual’s output alone. The acceptance of those individual differences promotes an environment where all people have value instead of a few stalwarts that carry the rest.

Football Is a Meritocracy

The game of football obviously teaches many life lessons, but possibly none are more important than the realization that not everyone is a first stringer or a starter. Opportunities are earned in football just as they are in life, and like life sometimes it may not seem fair, but young people learn quickly in football that virtually nothing is given. Football players and coaches live by a pretty strict code that the best players play. Life mirrors that philosophy. This is a harsh reality for many, and it leads to the attrition of some, but this is a lesson worth learning. In life, there are not going to be participation trophies, and everyone will not receive a ribbon just for showing up. Football teaches young people that they need to possess the grit to reach the goals that they’ve set for themselves, and each time they reach the goals they’ve set, they need to create new ones because there will likely be others nipping at their heels trying to take the positions to which they’ve ascended. This reality makes football a great metaphor for life because it teaches young people to never give up and to seize their opportunity when their time comes.

Those that have participated in the game of football are a part of an exceptionally large fraternity. In football, coaches and players “invest” in each other. Players are often measured by how much they’ve “bought in.” Almost any former football player will say their coaches and teammates were their family. As many a football coach knows, a player’s football “family” teaches that young person how to count on others while holding himself/herself accountable. These “family” connections allow coaches to push players past limits they never thought they could reach. The bonds that are built through shared adversity and common experience hold stronger than many that are created outside the realm of football. For many, the relationships developed in football provide the bedrock for the types of relationships players will have throughout their lives.

I’d like to thank the AFCA for granting me the opportunity to share these insights about the greatest team game there is. Also, thank you to Craig Knoche of Wabash College as well as our staff at Niles West for building relationships with our young people and providing them with positive mentorship.

Coach Pierce is the former head football coach at Niles West High School in Skokie, Illinois. He has coached at the high school level and college levels since 2000, including stops in Illinois, Indiana, and Texas.